Humvee gunner in Ukraine runs out of .50 cal ammo, switches to rockets in viral video 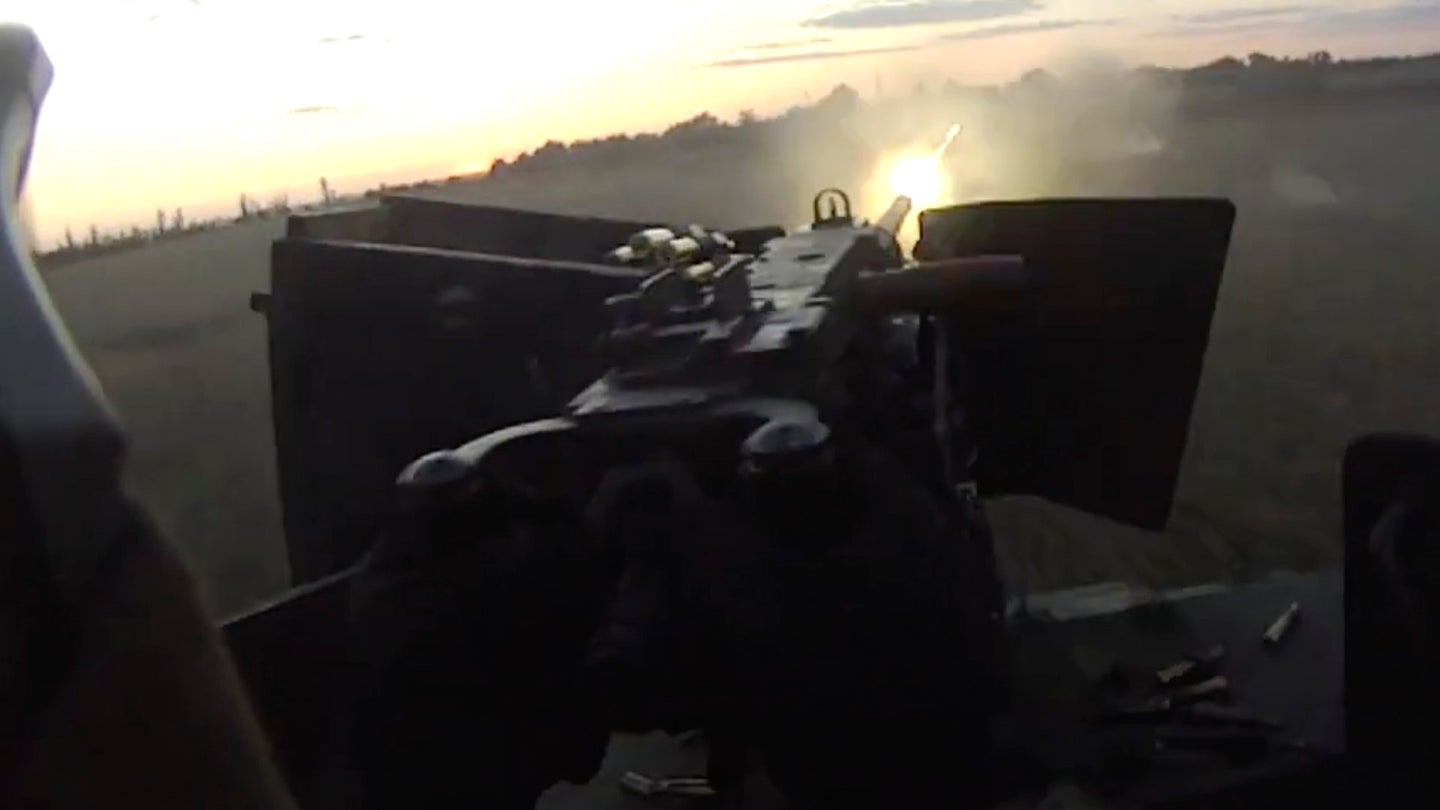 When you’re out of ammunition, you don’t want to get into a debate with your battle buddies about how to fix the situation, but that is apparently what happened to a foreign volunteer fighting in Ukraine in the middle of intense combat.

A new video on social media shows a unit made up of foreigners and Ukrainians as they attack a Russian-held village in Ukraine. The footage appears to come from the helmet camera of a Humvee gunner, who speaks English with an American accent.

In the video, the gunner’s Humvee comes very close — perhaps within 100 yards — of a cluster of houses, from which he can see the muzzle flashes and hear enemy weapons firing at him. After firing several bursts at one of the buildings, the gunner runs through his ammunition, and he starts screaming “ammo!” repeatedly to his comrades inside the Humvee. Instead of the .50 caliber ammunition he wants, they hand him an AT4 rocket launcher, which he immediately aims and fires.

Afterward, the gunner makes it explicitly clear to the others in the Humvee that he needs more .50 cal ammo, but they hand him another AT4, which he barely manages to aim before firing with all the rounds impacting around him. Eventually, the gunner’s comrades hand him a belt of ammunition, and when he starts firing again, an enemy rocket zips by, narrowly missing him.

On his Youtube channel, the gunner claimed that as soon as he had reloaded, he shot an enemy fighter with a rocket propelled grenade before the man could destroy one of his unit’s Humvees.

“That’s why you see that rocket get fired into the air,” wrote the man, who identified himself by the Youtube username Crewservedfordays.

The gunner also wrote that prior to that mission, his unit had been briefed to expect enemy forces in the village to have Russian BTR or BMP fighting vehicles.

“When I shouted for ammo, my guy panicked and thought there was a BTR/BMP and that’s why he handed me the AT4,” the gunner wrote. “Yeeted that into my designated house. When I was given the 2nd AT4 I started to take small arms fire from my house. I stopped that really quick with a round into the structure.”

However, former Army infantry officer and enlisted Green Beret Benjamin Bunn noted a few details that could indicate the Ukrainians intentionally handed the gunner AT4s to attack one of the houses in the village. After the gunner ran out of ammunition, he used a Leatherman to open the feed tray, and that could indicate that he was trying to repair a malfunction, said Bunn, who served in the Army from 2000 until 2016.

With the Humvee’s .50 caliber down, it is possible that the other Ukrainians’ first reaction was to hand the gunner working weapons, said Bunn, who also noted he has not seen the type of combat shown in the video since the U.S. military’s initial invasion of Iraq in 2003.

From the speed of the attack and the way the Ukrainians were directing their fire, it appears their mission was to launch a quick vehicular raid against the group of houses, Bunn told Task & Purpose. Since no armored vehicles can be seen in the video, it is possible the Ukrainians always intended to use the AT4 rockets against those houses as part of the raid, he said.

“I’ve been in small, dismounted, maneuverable elements, where we had AT4s or SMAW-Ds [Shoulder-Launched Multipurpose Assault Weapons-Disposable], different types of anti-tank munitions,” Bunn said. “When people are firing at us from fortified positions, I will 100% shoot at them with an antitank weapon or a rocket because it’s good at essentially degrading the enemy’s ability to seek both cover and concealment.”

To former Marine Corps Capt. Matthew Cancian, the video is a good illustration of “the fog and friction of war.”

Cancian, a contractor with the Naval War College, said that the fact the gunner asked at least twice for .50 caliber ammunition and was handed AT4s instead shows how even basic things such as talking to the person next to you become complicated in combat, when your adrenaline is pumping.

The video also underscores a truism of war: You can never have too much ammunition, he said.

“You’re going to put many more rounds downrange than you think,” Cancian told Task & Purpose. “You’re going to use whatever you have on hand. For every AT4 fired at an armored vehicle (what it is notional supposed to do), you’re going to have 10 fired at fortifications or enemy infantry (as was the case here).”

Another conclusion that Cancian took away from the video is that the Ukrainian forces do not look to be very tactically proficient. Normally a U.S. military assault would include troops to suppress enemy fire and other service members to carry out the assault, but the Ukrainian Humvees shown in the video appear to be trying to carry out both tasks at the same time. It also seems as if the vehicles abruptly end the mission by driving away.

“While I’m reticent to armchair general any action, it doesn’t appear that they have mastered fire and maneuver,” Cancian said.