You’ve seen this airplane come and go countless times since the beginning of the deployment but this time your name is on the manifest. It is your “freedom bird.” 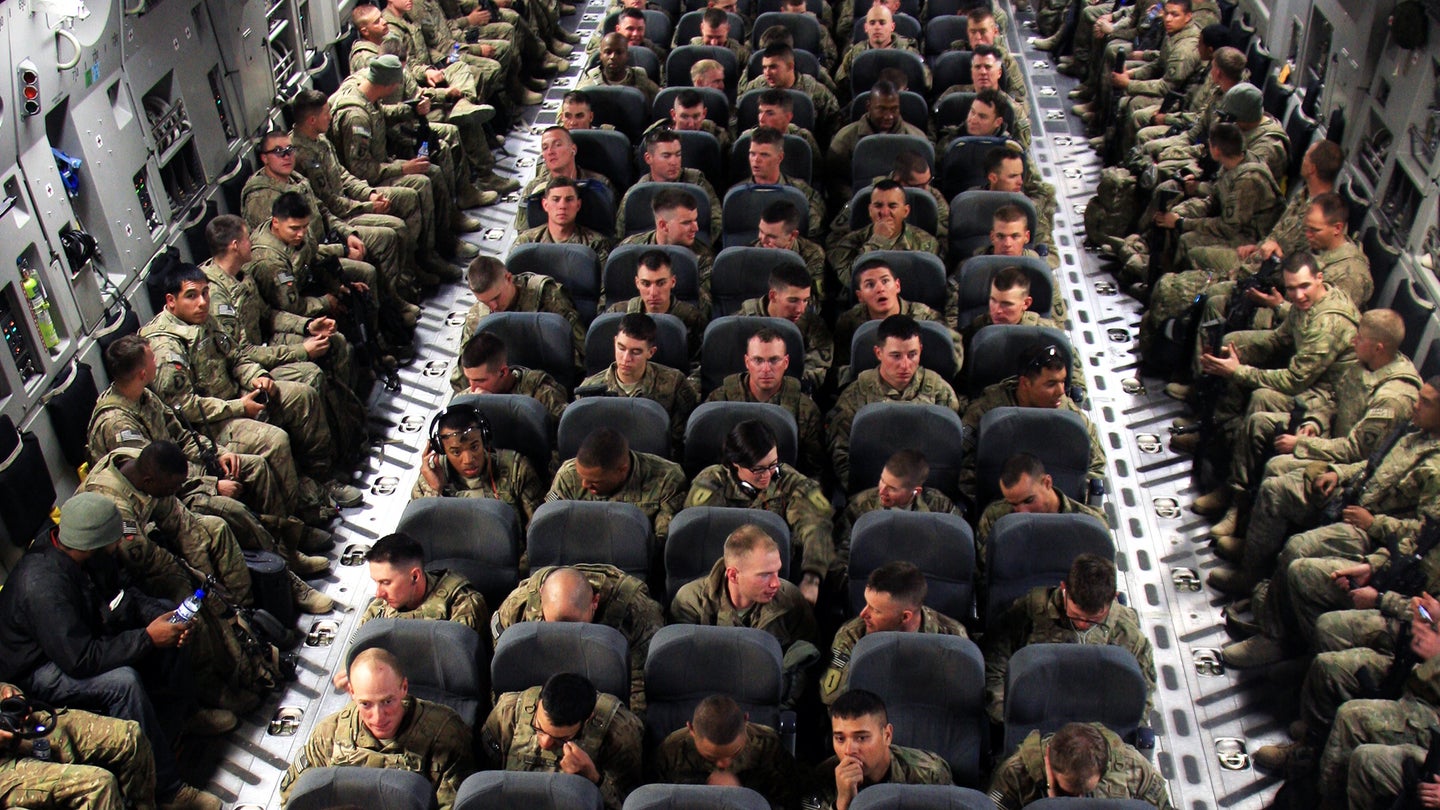 The first thing you notice is the color. A brightly painted commercial airplane stands in sharp contrast to the utilitarian gray military cargo planes parked on your desert airbase. Illuminated by the flight line lights, it has a kind of glowing radiance. You’ve seen this airplane come and go countless times since the beginning of the deployment but this time your name is on the manifest. It is your “freedom bird.”

The place you’re leaving is so familiar it might as well be the only world you’ve ever known. It is the shop, the gym, the dining facility (DFAC), your bunk, the perimeter road you run four days a week, and endless miles of gravel crunching under your feet. It’s a place of hard work and long hours, but also a place of growth where despite the sometimes monotonous nature of your work, you have built a better you.

Constantly watching a calendar has distorted your perception of time. The days have slogged by at a maddeningly slow pace, but you held on and this deployment, like the others before it, has found its way to an end. You pick up your gear and advance toward the towering envoy from the real world. At the top of the stairs you stop, take one last look out across the diesel-power illuminated moonscape, and say goodbye to the best parts and good riddance to the rest.

The flight crew thanks you for your service as they welcome you aboard. Their faces are different. They’re not tired like yours. Their uniforms are neat and colorful. They are cheerful in a way you haven’t been in a long time, relaxed in a way not typical of a commercial flight crew. They are more real and that’s something you appreciate.

Yours was a world of sand, smoke, and dirt. A civilization of plywood, canvas, and steel rising from the desert. The aircraft cabin is not that world. Well-worn and faded camouflage uniforms on tired bodies clash against the clean business class interior. You find a seat and note familiar commercial airplane sights and sounds. You’ve thought about this moment every day for so long. It lives up to your expectations, just like it did the last time, and like it will again next year when you do it all again.

On the runway, the engines spin up to full power. The airplane shakes in place for a moment before launching into the wind. A pilot belts out “Yeeeeehaaaa!!!” over the intercom. Again, not your typical buttoned-down flight crew. Your airplane climbs and banks to the west. Through the window, the base shrinks in the distance. One day time will filter out your frustrations and you’ll miss that place, but you don’t know that now. All you know is that none of what goes on there is your problem anymore.

There are a few stops along the way. Crisp winter air stings your face as you walk across the tarmac in Germany. You buy a beer and bratwurst from a little snack bar in the terminal and somehow they’re out of sauerkraut. Of all the places in the world, how does Germany run out of sauerkraut? In Ireland, you’re stopped in a Duty-Free shop by a woman with a thick brogue accent who says, “We appreciate what you all are doing for us over there.” It is an unexpected but welcome sentiment.

Along the way the mood is light, conversations are easy and hopeful. You hear more laughter than you remember on the way over. With the heavy yoke of responsibility ceded to replacements, the redeploying travelers have nothing but the rest of their lives to look forward to.

The trip across the Atlantic is the longest leg, but the wait isn’t a problem. American service members are well-conditioned for the wait. Eight more hours isn’t even a full-duty day downrange. Between meals and movies, you drift in and out of sleep until at long last they announce that you’ve reached the eastern seaboard. The weary travelers applaud and before long the airplane begins to slow and descend. The flight crew hands out U.S. Customs forms. This is almost over. The airplane breaks through the clouds to reveal a kaleidoscope of color and motion. Trees, buildings, cars, and roads stretch out in all directions. Life is everywhere, right under your feet. In a few minutes, you’ll be on the ground, in the middle of all of it.

You step out of the jetway and into a world that is virtually spinning around you. The cacophony of light, action and sound is disorienting, a result of months of virtual sensory deprivation imposed upon you by the realities of deployed life. People are going everywhere, doing everything. You see families with children and realize you haven’t seen families with children since you left. You walk through the concourse in a state of simultaneous relief, wonder, and amusement. The convenience of modern western life, once hidden in plain sight, is now obvious and everywhere. The experience is flavored by the welcome smell of all American deep-fried, flame-broiled, oven-baked, sugar-iced, fresh-brewed, and carbonated everything.

As you move through the airport people approach and offer thanks for your service. A businessman tells you that his kids sleep safely at night because of the work you’re doing over there. A woman, wide-eyed and on the verge of tears, stops to offer you an emotional thank you. The outpouring of gratitude feels unearned but you graciously accept.

The first stop in the states is rarely the last. It is wonderful to be back on American soil, but you’re not home yet. There’s one more flight to catch. This one is domestic and short. On this flight, the pilot announces that there are “heroes” onboard. Your fellow passengers applaud. A business executive buys you a beer. You are nervous on this flight. It’s a happy nervous though, anticipation on a grand scale.

Turbulence usually bothers you, but not this time. Just get it on the ground man, preferably right side up and not on fire. Before you know it you’re taxiing toward the gate. You eye the terminal out the window. It feels almost impossible that your entire world is in that building waiting for you. Your heart races. Moments later you’re off the airplane, moving fast through the concourse.

And then you see them.

The reason you went over there, the reason you saw it through, and more than anything, the reason you made it home. The world around your family disappears as you close the last few feet of what has been an incredible distance. Your little boy is done waiting though. He darts out under the rope and meets you with the hug he’s been saving up since the day you left. This is the best day of your life. You scoop him up and head straight to his mother, the true unsung hero of this deployment. She is the one who, against the odds, held the whole crazy enterprise together for all these months. You can see relief through the tears in her eyes.

It is a grand spectacle, an exercise in delayed gratification of the highest order. You will never forget this day and your thoughts will drift back to it for the rest of your life. This is the incredible moment when, amid a flurry of signs, balloons, kisses, hugs, and tears… you step out of the war and back into your life.

Editor’s note: A version of this article first appeared at Joker Romeo Lima.