UNSUNG HEROES: The 3 Americans Who Stopped An Armed Gunman On A Train In France 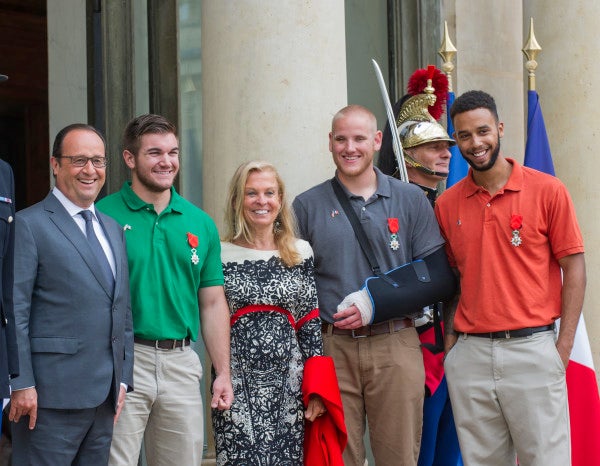 On Aug. 21, 2015, a man boarded a Paris-bound train in Belgium with an AK-47 assault rifle, nine rifle magazines, an automatic Luger pistol, and a box cutter. Two American servicemen and a college student quickly disarmed and restrained the man, later identified as Moroccan national Ayoub El Khazzani, saving the lives of everyone on the train.

Khazzani’s alleged actions and intentions on that train were dastardly. As the train passed into France, Khazzani entered the train’s restroom with his suitcase, emerging some time later with his weapons drawn. The first person to see him was a language teacher with dual French and American citizenship, Mark Moogalian. He told his wife to get down before running to disarm the attacker. As Moogalian grabbed the assault rifle, Khazzani drew his pistol and pulled the trigger, shooting him through the back and neck, leaving him seriously injured.

Hearing the gunfire from the adjacent train car, three Americans identified as Sacramento State University senior Anthony Sadler, 23, Airman 1st Class Spencer Stone, 23, and Army Spec. Alek Skarlatos of the Oregon National Guard, 22, were prepared to take the shooter down. The three childhood friends were on vacation in Europe and en route to Paris.

When Khazzani entered the train car, “he never said a word,” said Sadler at a press conference at the American ambassador’s residence in Paris, reported The Guardian. He realized his choices were “do something or die.”

“I just woke up from a deep sleep and Alek was sitting next to me,” Stone told to the press. When he saw the shooter holding a rifle, Stone said, “it looked like it was jammed – he was trying to charge the weapon. Alek just hit me on the shoulder and said ‘Let’s go!’” The young men sprang into action.

Khazzani drew his pistol, but Skarlatos grabbed it while Stone, a jiu jitsu fighter, used a chokehold to incapacitate him. The gunman “just kept pulling out more weapons,” said Stone. “He pulled out a handgun, Alek took that. He took out a box cutter and started stabbing at me with that.”

“I let him go and by that point the shooter was in the middle and me, Alek and Anthony are just surrounding him and we just started pounding him,” Stone said, according to an Air Force press release. “I got him in another choke and I choked him out until he went unconscious and myfriend kept hitting him in the face with the gun.”

Looking around, the young Americans saw Moogalian bleeding profusely out of his neck. Stone ran to him to try to stop the bleeding while Sadler went to other train carssearching for medical supplies.

“So I yelled out 'I'm a medic I'm a medic!' and took the guy and held him down,” Stone told the Air Force. “I just stuck my finger in his neck, found what I thought was an artery and just pressed down.” Stone would hold that position until French authorities arrived, even though he himself was wounded.

Stone sustained severe injuries including a cut to his thumb that nearly severed it, and many gashes, nurses would later indicate, were close to major arteries.

French President François Hollande awarded the three the Legion of Honor, France’s highest decoration, along with British citizen Chris Norman, who also assisted in apprehending Khazzani. Moogalian will receive his own Legion of Honor when he is discharged from the hospital.

The three young men received their award in polo shirts and khakis, underscoring the casualness of their heroism.

Hollande took to social media to express his gratitude as well saying, “This Legion of Honor rewards the courageous and great acts of humanity of Christopher Norman, Anthony Sadler, Aleksander Skarlatos, and Spencer Stone.”

Back home, Skarlatos will receive the Soldier's Medal, the highest non-combat medal in the Army, according to Army Times. Both Army Secretary John McHugh and Army Chief of Staff Gen. Mark Milley made statements commending Skarlatos for his bravery. “I am proud to call you a hero and a soldier,” said Milley.

In addition, Stone is to be nominated for the Air Force’s highest non-combat related medal, the Airman’s Medal, according Air Force Times.

Air Force Chief of Staff Gen. Mark Welsh said on Monday at a press briefing that if France considers the attack terrorist-related, the military will consider awarding a Purple Heart as well due to the precedent set by the 2009 Fort Hood shooting. The Defense Authorization Act of 2015 extends the Purple Heart Medal to service members wounded or killed during an attack by a foreign terrorist organization.

“Airman Stone and his friends personified service before self, no question about it,” Air Force Secretary Deborah Lee James said on Monday. “Their fearlessness, courage and selflessness should inspire all of us, and, thanks to them, no one died on that high speed European train on Friday.”