During World War II, at the behest of the U.S. Army, Bell Laboratories tested sound suppressors for various firearms. The... 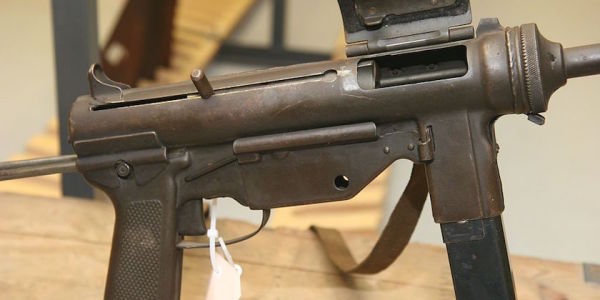 During World War II, at the behest of the U.S. Army, Bell Laboratories tested sound suppressors for various firearms. The best known of the company’s designs was a specialized submachine gun that went on to serve U.S. special operators through three wars.

Task & Purpose got a chance to inspect one of them, a modified .45 caliber M3 “Grease Gun” during a behind-the-scenes tour at the Naval Heritage and History Command in Washington, D.C. Though it might look crude, the design proved rugged and reliable in combat for more than two decades.

In 1942, the Army got the first standard M3s. Engineers crafted the weapon as a replacement for the iconic, but also expensive and heavy, M1 Thompson. At the time, the service paid a mere $20 for each of the eight-pound guns.

Troops quickly gave the stamped metal guns the nickname “Grease Gun” on account of the distinctive shape. They fired at a relatively slow, but inherently accurate rate of just 450 rounds per minute. In comparison, the older M1s spat out 700 bullets in the same amount of time.

Though happy with the basic product, the Army was interested in adding a suppressor to the Grease Gun. Reducing the noise and flash at the muzzle would give troops an edge while fighting at night, in close quarters, during reconnaissance missions, or just in general.

The M3 offered a good base for the modifications. The barrel assembly simply screwed onto the front of the receiver. Bell’s design simply removed the standard barrel and threaded on a new one with 48 holes in it. A two-piece metal shell full of a wire mesh slid over the vented barrel to create an expansion chamber.

When a shooter fired the weapon, some of the gasses pushing the bullet down the barrel would bleed off into this space, helping to lower the gun’s report and eliminate any muzzle flash. Army testing showed the sound was just over 100 decibels, according to one 1968 Army report reviewing available suppressor designs.

Though quieter than a normal gun, this was still relatively loud, given that a normal conversation you have with someone else is around 60 decibels. “Conclusions from the tests were that the silenced M3 was quiet, but still detectable at close ranges,” the Army study explained.

Related: These Are The 50-Round Magazines The Navy Made For SEAL M16s »

With those results in hand, the Infantry Board decided it wasn’t worth it to hand out the guns to regular troops. But another group was very interested in Bell’s work.

America’s top secret Office of Strategic Services was already using silenced 9mm Sten guns. Designed to be made quickly at a low cost, these British-made submachine guns weren’t exactly known for being durable or reliable.

The U.S. commandos leapt at the chance to get a better suppressed weapon. The OSS ultimately bought approximately 1,000 of the special barrels to attach to their grease guns, according to the Army review.

“To a subjective listener, both systems … sounded comparable in loudness,” the Army overview explained. “However, each weapon had its own characteristic sound signature — the M3, a mild clap; the Sten, a distinct hiss.”

The commandos brought the M3 to Europe, where the Operational Groups gathered intelligence, worked with local resistance, and otherwise harassed Nazi troops and other Axis forces. After World War II, the OSS’ specially-trained personnel helped staff the new Central Intelligence Agency and lay the groundwork for the Army’s Special Forces and other American special operations forces.

A suppressed M# in the collection of the Naval Heritage and History Center.Photo by Joseph Trevithick.

They brought not only their experience but also their weaponry with them in many cases. The suppressed M3s reportedly served with elite troops during the Korean War and eventually ended up in Green Beret and U.S. Navy SEAL arms lockers.

Members of the secret Military Assistance Command, Vietnam – Studies and Observation Group reconnaissance elements were particularly fond of the aging weapons. The suppressors could help hide the small teams as they silently prowled Laos and Cambodia, gathering intelligence and calling in air and artillery strikes.

“Occasionally, an individual operator would like the firepower of the M3 and carry the weapon for a specific mission by preference,” SEAL historian Kevin Dockery wrote in his book “Special Warfare Special Weapons.” For the elite sailors, “training was continued on the M3 and M3A1 weapons well into the 1970s, but the Grease Gun was considered an obsolete weapon by 1974.”

In the Army, the standard models soldiered on through the 1980s as personal defense weapons for armored vehicle crews. The service finally replaced the last of the World War II-era guns with M4 carbines in the 1990s.

But the idea of a silenced Grease Gun for special operators didn’t go away completely. In 2004, the Philippine Navy and Marine Corps refurbished a number of retired M3s as personal defense weapons for boat and vehicle crews.

There are no public reports about their use in combat, but if they’re still in service, the Philippine guns are probably the last silenced Grease guns in active service anywhere in the world.