Paul Stanley On Veterans: ‘Their Bill Has Already Been Paid In Full’

Back in the 1970s, KISS was one of the biggest rock bands on planet Earth. Even today, the group’s influence... 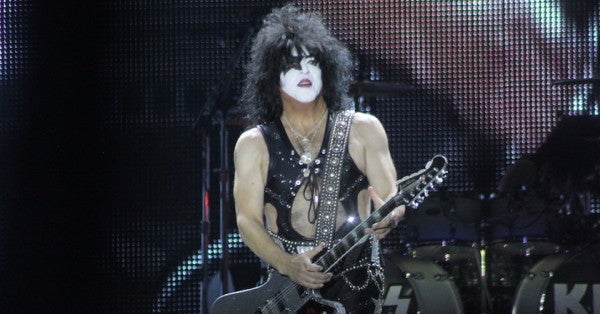 Back in the 1970s, KISS was one of the biggest rock bands on planet Earth. Even today, the group’s influence cannot be overstated. Combining a heavy metal sound, balls-to-the-wall theatrics, and sinister, comic book-style costumes, KISS redefined the rock & roll experience for a generation of young Americans who’d grown disillusioned with the disco music and folksy art ballads that pervaded the era. Now, many decades later, the KISS Army marches on.

And while they’ve yet to shed their rebellious stage presence, or the makeup, the members of KISS have become fiercely patriotic in their old age. The Freedom to Rock tour, which kicked off on July 4, will see the group performing in more than 30 cities across the country, many of which they’ve never played before. But it’s not just about the music: In an effort to shed light on military and veterans issues, the group has invited service members to join them on tour as honorary roadies.

“Anybody who comes from the military to be a KISS roadie can sit all day and watch, or can lug gear, or do whatever they want,” KISS frontman Paul Stanley (aka The Starchild) told Task & Purpose. “Their bill has already been paid in full.”

With the Freedom of Rock tour now in full swing, Task & Purpose spoke with Stanley about the disconnect between civilians and the military, why more can be done to support veterans, and preserving the KISS legacy.

Active duty service members and veterans, including Guard and Reserve, can apply for free Freedom to Rock concert tickets at VetTix.org. Want to be a KISS roadie? Apply to Hiring Our Heroes here.

Why did you decide to get involved in military and veterans issues? Do you have a personal connection to the military?

Well, my mom was born in Berlin and had to flee the country to avoid being gassed. She left Berlin and went to Amsterdam and had to flee there to stay one step ahead of the Holocaust. My dad is also first-generation Polish. Europeans have such a debt to the American armed forces for what they’ve done in the past. I think as I got older I certainly began to realize that the people in America who think that freedom is free are the ones who didn’t have to sacrifice for it. We’re born into a country where we take a lot for granted, and, unfortunately, the people who volunteer to go into harm’s way, who volunteer to risk life and limb, are the ones who somehow come back shortchanged. That’s grossly unfair.

I think, besides the impact that serving has on vets, we sometimes forget that there are entire families involved — there are wives, there are children, there are husbands. And these people who do so much for us somehow get the short end of the stick upon their return. So any way that I can spotlight their plight. They are what has made America great, and their circumstances have really made me see the flaws in the system. I want to see us give back as much as possible, and to recognize the military, and to be proudly patriotic, and to support our troops in any way possible. It’s not a political issue, and it’s not a matter of how you feel about any battle, or the president or Congress. This is purely about supporting the people who go and do our battles for us.

Do you think things have gotten better for veterans since the wars in Iraq and Afghanistan began?

Certainly at this point we seem to recognize post-traumatic stress much more than we did. There are some wonderful programs, but they’re so much in the minority. There are people who need to be cared for and looked after — some much more obviously than others. But anybody who has an issue upon their return really needs to be given our full attention, and that still is not the case.

Did you guys receive a lot of fan mail from people serving in Iraq and Afghanistan over the years?

During this tour, you guys are inviting service members to work with the band as roadies. What’s the reasoning behind that?

More than anything else, it’s really a chance to spotlight the military and what they’ve done for us, and bring them into the consciousness of the people who perhaps take them for granted. It doesn’t change anybody’s life to spend the day with us. But it may impact the way how other people treat or what they contribute to help the military. These people deserve everything we can give them and more, because they make everything we have possible. So it’s a huge obligation that we have in the sense of responsibility. That being said, everybody at the arena gets an incredible show. It’s not only an honor. It’s something that we live to do. The legend of KISS is a great one and it means we have to go out there and live up to it and go beyond it.

Do you think veterans should play a bigger role in shaping the future of our country?