The organizers of Boston’s St. Patrick’s Day parade in South Boston are facing a mounting backlash after denying a group... 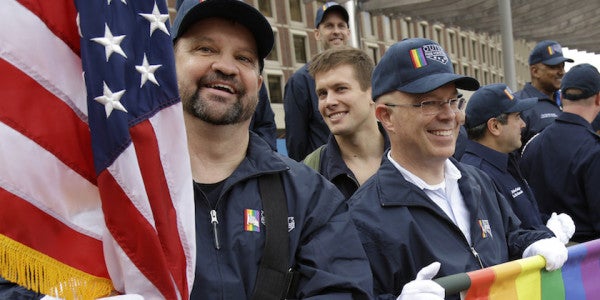 On March 6, the South Boston Allied War Veterans Council voted 9-4 against allowing OUTVETS, an organization of LGBT veterans, to take part in the parade. The verdict was quickly followed by a wave of objections, including Republican Massachusetts Governor Charlie Baker, who told the Boston Globe: “If veterans groups aren’t allowed to march in that parade for whatever reason, then I will probably find something else to do that day.”

Boston Mayor Marty Walsh also vowed to boycott the parade unless the decision is reversed.

“I will not tolerate discrimination in our city of any form,” he said in a statement. “We are one Boston, which means we are a fully inclusive city. I will not be marching in the parade unless this is resolved. Anyone who values what our city stands for should do the same.”

Walsh and Baker are not the only politician to voice disapproval of the Allied War Veterans Council’s decision. City Councilor Tito Jackson, who is running for mayor, announced via Twitter that he too would not be attending, while Congressman Seth Moulton, a four-tour Marine veteran of the Iraq War, went so far as to encourage a general boycott of the parade, which is one of the largest St. Patrick’s Day celebrations in the United States.

I won't be marching in St. Patrick's Parade #weareboston we include not exclude our citizens. https://t.co/QUKMBnHgEC

“Let’s just be clear, there are men and women who courageously put their lives on the line for our country,” Moulton said in a statement. “They deserve our respect just as much as anyone, and if this decision is not reversed immediately, I would encourage anybody who supports freedom, equality, and the service of our veterans no matter who they are, to boycott this parade.”

Moulton marched with OUTVETS in 2015, when the group became the first LGBT organization to participate in the parade after decades of resistance from the Allied War Veterans Council.

Boston firefighter Dan Magoon, an Iraq and Afghanistan combat veteran, was one of the four council members who voted in favor of allowing OUTVETS to march. He resigned as parade marshal after the decision, which, he told the Boston Globe, was made after the council held a heated 20-minute discussion. According to Magoon, members who voted against OUTVETS said they did so because the group filed its application after deadline.

But members of OUTVETS aren’t buying it. In an interview with the Boston Globe, Bryan Bishop, an Air Force veteran and the the founder and director of OUTVETS, said, “It’s because we’re an LGBT organization. They didn’t want us in the first place.” He also claimed that the application did not include a deadline.

“Here’s the deal: The issue here is that with no cause you have excluded a veterans organization from a veterans parade after we had participated for two years,” Bishop added.”No matter what they say, they are discriminating against veterans. End of story.”