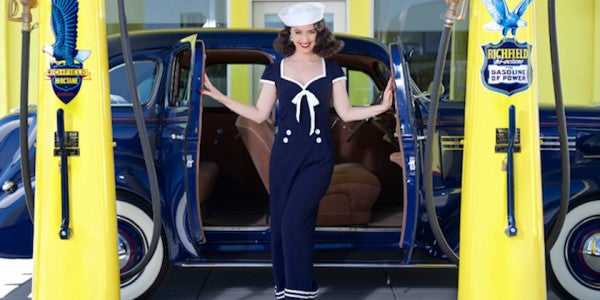 The American tradition of pin-up propaganda dates back to 1917, during the first World War, when President Woodrow Wilson’s Committee on Public Information began using posters featuring attractive women in military attire to inspire patriotism, bolster morale, and encourage young men to enlist with misogynistic slogans like, “Gee, I wish I was a man. I’d join the Navy,” and “Be a man and do it.” (No pressure!)

The tradition persisted through World War II and Korea, but didn’t really take hold during the Vietnam War, when the pin-up girl was largely overshadowed by the totally nude models of Playboy. By the time the wars in Iraq and Afghanistan kicked off, coinciding with the advent of high speed internet and the ubiquity of lad mags like FHM and Maxim, the pin-up girl had fully receded into the realm of nostalgia.

In 2006, Gina Elise, the grandchild of a WWII Army veteran, set out to revive the pin-up tradition, but with a philanthropic twist. “I really just wanted to do something creative to give back to the troops,” she told Task & Purpose. And so Elise founded Pin-Ups for Vets, a nonprofit organization that produces WWII-style pin-up calendars featuring both male and female military veterans in place of professional models. But instead of being used to boost recruitment numbers or sell war bonds, the calendars are sold to raise money for wounded and ailing G.I.’s.

To date, Pin-Ups for Vets has donated over $50,000 worth of state-of-the-art rehab equipment to Veterans Affairs and military hospitals across the country. Additionally, Elise and her team regularly tour those hospitals to boost morale, usually bearing gifts, and, of course, calendars for the patients they visit. “Many of the veterans we visit do not have friends or family nearby,” Elise said. “So the visits can be the difference between a good day and a bad day.”

You can pre-order the 2017 Pin-Ups for Vets calendar here.