This Is The World’s Most Dangerous Game Of Pool 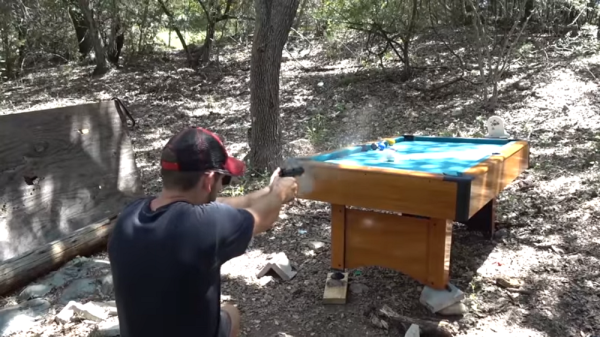 A video by the YouTube entertainment channel Demolition Ranch shows the world’s most dangerous game of pool, where the participants take turns blasting balls around the table with a pistol.

Matt Carriker, the video’s host, kicks the game off by literally booting a pool stick out of the way and proclaiming: “We don’t need this trash here.”

It gets off to a rocky start, when the cue ball literally explodes after the first round impacts.

Fortunately, they came prepared and used a baseball for the remainder of the game. The teams are split between Texans and Californians, with the former claiming an advantage because “In California they don’t know how to shoot guns very well.”

Unfortunately for them, the Texans lost and had to take a dive in a nearby creek.

Related: The Can Cannon Soda Launcher Is The Most Epic AR-15 Accessory On The Market »

Demolition Ranch falls somewhere between a firearms video blog and comedy show, with the channel’s about me page aptly describing itself as: “Not your average gun channel.” Carriker founded Demolition Ranch in 2011, and in addition to running a popular entertainment channel, is also a veterinarian and the founder of another group called Vet Ranch, which takes in homeless and sick animals.

Watch the full YouTube video by Demolition Ranch below.