George R. R. Martin’s “Game of Thrones” may have its roots in history. The popular HBO television and book series... 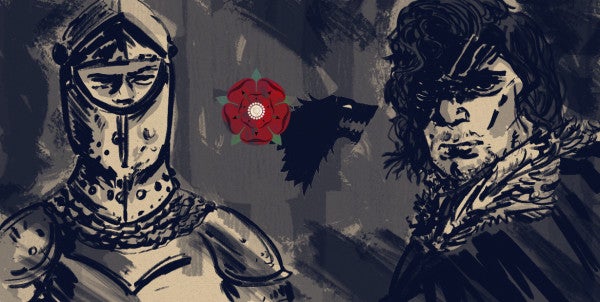 George R. R. Martin’s “Game of Thrones” may have its roots in history. The popular HBO television and book series draws many parallels to England’s “Wars of the Roses,” which took place during the 15th century.

Fought between the descendants of King Edward III, the Wars of the Roses spanned several generations, and led to some of the bloodiest battles in the country’s history. It centered on a conflict about the rightful heir to England’s throne. According to record, the Wars of the Roses were fought sporadically between 1455 and 1487; however, there was related fighting as early as 1399.

When King Edward III died in 1377, his first son and chosen heir was already dead. Instead, Edward's grandson Richard II took the throne — usurping his three living sons, Richard's uncles. Two of them then divided into the houses of Lancaster and York, providing the main basis for Wars of the Roses.

Here are eight instances where it appears “Game of Thrones” borrowed story lines from the Wars of the Roses.

1. The family houses are similar.

2. Margaret of Anjou is Cersei Lannister.

The Lancasters first seized the throne from Richard II in 1399 and held it until 1422 when their king Henry V died, leaving his infant son Henry VI to lead.

In an effort to secure his reign, Henry VI married Margaret of Anjou, France. She greatly distrusted her husband’s advisor, Richard York, who was attempting to make necessary reforms to lead England. Richard Neville, the first earl of Warwick, also known as “the kingmaker,” installed York as protector of the realm.

There are many noted similarities between Margaret and Cersei Lannister, whose relations with the King’s Hand, Ned Stark, resemble that of she and Richard York.

Instead of beheading York immediately as Ned Star was, Margaret first banished him Ireland, allowing England to sink into chaos.

While there, York gathered up an army to march against the Lancasters. Though he was unsuccessful militarily, York was appointed Henry VI’s protector when the king suffered a brief breakdown. York managed to make several much-needed reforms during that time, until Henry recovered, repealed the rulings, and removed York from his court. This is very similar to what happened when Ned Stark served as Robert Baratheon’s hand of the king.

York then raised another Army, but was killed in battle by Margaret’s loyalists. And much like Ned Stark, his head ended up on a pike.

4. Edward of Westminster is Joffrey Baratheon.

Margaret and her son with Henry VI — Edward of Westminster, who is believed to have been arrogant and cruel, and the basis for character Joffrey Baratheon — escaped to exile in France when Edward IV laid claimed to the throne.

In 1467, the ambassador of the Duchy of Milan to the court of France wrote that Edward “talks of nothing but cutting off heads or making war, as if he had everything in his hands or was the god of battle or the peaceful occupant of that throne.”

However, in 1471, at the Battle of Tewkesbury, Edward of Westminster was killed.

Related: Game of Thrones is full of lessons for the military community »

Before he was exiled from court, York had convinced Henry VI to name his sons as successors to the throne. Though York died, his son Edward IV assumed the role of king in 1461 with the help of the kingmaker.

Edward IV was largely successful at holding the throne until it came time for him to find a queen. Warwick had made preliminary arrangements for Edward to either marry France’s King Louis XI daughter Anne, or his sister-in-law Bona of Savoy. History alleges that instead Edward secretly married a minor noble’s widow — Eleanor Talbot — and backed out his arranged marriage. She died shortly after.

This piece of history very closely resembles that of the Robb Stark storyline, which cost him his throne and his life in the Games of Thrones plotline.

Warwick, much like Walder Frey, arranged a marriage to secure power. Noting that Edward IV did not heed Warwick’s advisement, he switched sides from Yorks to Lancasters.

However, the invasion was for naught. In the Battle of Tewkesbury, Edward IV won over the Lancasters, and reigned largely in peace until his death in 1483.

Despite Edward IV’s legitimate marriage to Elizabeth Woodville, which produced an heir in Edward V, this was not the end of the Wars of the Roses.

With the death of Edward IV, the throne was left to a 12-year-old Edward V. However, he was usurped instead by his uncle Richard III, who claimed that Edward V and his brothers were illegitimate children because of Edward IV’s first marriage to Eleanor Talbot.

This may have served as inspiration for Stannis Baratheon’s challenge to Joffrey Baratheon.

Edward V, as a result, was never crowned. He and his younger brother Richard of Shrewsbury were sent to prison by Richard III and never heard from again. It is assumed that they died shortly after their imprisonment.

Tudor was a direct descendent of the first Duke of Lancaster. He grew up in exile in Brittany, France, until he invaded England to claim the throne in 1485 with the backing of the Yorks, who were divided after the Richard III’s usurpation.

Even though their marriage produced Henry VIII — who beheaded many of his wives for failing to produce sons — the Tudors family managed to reign undisputed from 1485 until 1603.

In the Game of Thrones HBO series, questions about the legitimate heir to the Iron Throne remained unanswered. With the launch of season six on April 24, hopefully we’ll get to see if that conflict ends in a peaceful resolution too.

View TED Ed’s video on “The wars that inspired Game of Thrones.”