This ultra-realistic military game makes you the micromanaging commander with the radio, and it’s a lot harder than you think

In "Radio Commander" you play as the commander of an infantry unit, bravely leading your men into battle... from inside a tent with a radio. 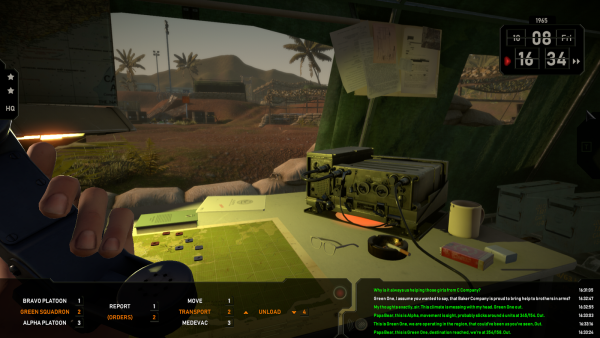 When it comes to realism in military video games, the gripes are pretty consistent: Everyone’s an operator who can shrug off a few rounds of 7.62mm like they just got hit with spitballs; ammunition is universal and works for every gun; your weapons never jam; you can run for days without needing to catch your breath; and barring a few exceptions, “suppressing fire” is just code for “spray and pray” rather than a legitimate tactic meant to keep the enemies’ heads down so your buddies can maneuver on them.

The critiques extend beyond just first-person shooters, with real-time strategy games often giving commanders an omniscient view of the battlefield, as if you were the god of war looking down from Olympus while your mortal playthings heed your every command.

Things like health, munitions, and morale are, at best, measured with a status bar that can be regenerated by moving your troops out of harm’s way for a few seconds, before tossing them right back into the meat grinder the next moment.

Yet, in spite of these critiques, there’s always — and I mean always — that one guy who chimes in with: Well, if you wanted a realistic war game, you’d just be standing on post for 12 hours.

Radio Commander takes place during the Vietnam War, but unlike other real time strategy games, you’re not looking down over the battlefield, and ordering soulless little avatars into war. Instead you play as the commanding officer of an Army infantry unit, who has to manage the heavy burden of command, as you coordinate combat operations, artillery fire, resupplies, and troop movements from an outpost armed with just a radio, and a map.

After some early crowdfunding, Radio Commander is now available on Steam for $20, as is their squad management pack, which the developers provided to Task & Purpose for review, along with the original game.

The first mission kicks off with a nifty little propaganda video imploring you — a commander with the excellent call sign “Papa Bear” — to carry on the heroic legacy of those who came before, as you “fight against a sinister enemy,” meaning the North Vietnamese forces, that wish “to enslave the freedom-loving people of South Vietnam.”

And don’t worry, the cheery narrator advises, you’ll be back home in time for the holidays.

Then it cuts to black, and your downrange tour begins… in a tent, with a map, your shades, coffee mug, and of course, that trusty radio. As you pan around the hooch where you’ll spend the duration of your Vietnam War, you can catch glimpses of soldiers getting ready to go out on a mission, while outgoing artillery hammers away at some far flung enemy.

“Good day ladies and gentlemen, this is Papa Bear,” your character says as you pick up the radio and quickly rattle off the temperature — a sweltering 105 degrees Fahrenheit — before briefing your soldiers on today’s mission: Winning hearts and minds.

From the get-go, the in-game mechanics are a little tough to get a hang of, but in a way that makes sense. You have to manually look at the map, where you’ll see the starting position of your units, but it’s entirely on you to note where they are as the game progresses. This means that when you give a move order, you have to give the grid coordinates for where your guys are going, and check in with them over the radio to see how far along they are — a detail that is crucial when your soldiers inevitably start taking fire.

As I order Alpha platoon to head to a nearby village to chat with some elders and ask about any North Vietnamese Army or Viet Cong activity in the area, I take a moment to manage my squads.

In doing so, I come to suspect that the platoon leader, 2nd Lt. Michael “Little Bull” Kovacs — great name — may have a penchant for sucking up, signified by a character trait called “teacher’s pet” which boosts how much experience he earns. I also find out that of the 36 men in his platoon, only one can speak Vietnamese — Cpl. Brice Kendrik. Leave it to the U.S. military to designate combat soldiers to nation-building efforts, but to forget to bring along enough people who speak the language.

How the war is being waged, and how well it’s going, is never far from the characters’ minds, either.

As I continuously harass my platoon over the radio — I am the CO, after all — we have brief conversations about the mission at hand. It ranges from: how the Army of the Republic of Vietnam soldiers in the area look bored and rarely leave their base at night; to how the locals are “pro-government” during the day when the American and ARVN troops are there, but at night, the Viet Cong slip into the village for “a quick chat about the revolution,” one of the soldiers dryly remarks over the radio.

The brief bitch session ends with me telling Kovacs that “it’s been like that for 10 years,” before reminding the lieutenant that he’s there to talk to the village elders, after which, I learn that there’s a suspected enemy camp nearby.

Now, the one critique I would offer Radio Commander, is that for all of the hard work the game developers put into nailing realism, they may have overlooked one crucial detail: Communications are never as clear in real life as they are in this video game.

That said, if you really do want to deal with an unreliable radio, you can enable “comms malfunctions” in the option menu. But why would you want to?

Playing a tactical strategy game that takes place entirely within a tent is a tough enough needle to thread as is. Adding a bunch of static and missed transmissions due to the weather and terrain might be one wrinkle too many for most players to handle, considering they already have to account for everything from beans, bullets, bandages, enemy troop movements, and the effects of low morale.

Returning to the mission at hand, and suspecting my guys might be in for a fight, I order one of the platoons I have in reserve to be choppered over to Alpha to provide overwatch, and direct Kovacs to secure the landing zone, or so I thought.

Instead, I accidentally send him, and his men, in the opposite direction. Twice. It’s around this time that Kovacs radios over to tell me that his men are exhausted — no surprises here, buddy — and it’s at this time that we get a look at the game’s behind-the-scenes mechanics.

Your soldiers have a complicated set of stats that track everything from how much ammo they have, to how well supplied and tired they are, all of which seems to figure in to their morale, which will inevitably impact how well they perform on that mission, and future ones.

Back in the game, Kovacs finally links up with the newly arrived Bravo platoon at the landing zone, and I order them both to begin searching for the suspected VC camp. But by the time they get there it’s deserted, no doubt thanks to my unplanned detour. To my credit, I play it off by saying “they must have been gone for a while.”

After torching what’s left of the camp — some tents and VC pamphlets — my platoons head back to the LZ, but then all hell breaks loose as the radio comes to life and the words “Bravo is under fire!” blare out.

It’s in that moment that I realize this is a game you have to play close attention to, because you only know where your men are if you radio over and ask. Fortunately for Bravo company, Alpha wasn’t far away, so I order them into the fight, and after a few frantic moments of gunfire over the radio, they confirm that the enemy force has been destroyed, with minimal casualties — only one soldier wounded.

Considering how poorly I managed my soldiers, it could have been a lot worse — and the mere fact that I thought about that while playing this game is pretty high praise. I was genuinely concerned that my blundering may have gotten these fictional characters killed.

Back in my tent I get word over the radio that both platoons are en route to the LZ, and within minutes, they’ve returned to griping and moaning as Kovacs and the platoon leader for Bravo get into an argument over the merits of having a foreign military try to sell democracy to an impoverished and war-ravaged populace.

Striving to be a good leader, I immediately tell them to shut the hell up, and after a few minutes of dead silence, they reach the helicopters, and the mission ends — just in time for me to refill my cup of coffee as I consider writing myself up for a medal, for the sake of realism.