The Birthplace Of Google Is Now Developing Military Tech

A group of students at Stanford University in California are coming up with ideas for next-generation defense products. Part of... 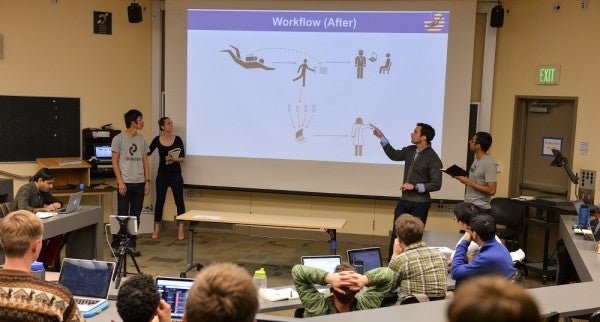 A group of students at Stanford University in California are coming up with ideas for next-generation defense products.

Part of the university’s Hacking 4 Defense program, the course’s 32 undergraduate and graduate students are broken into eight teams of four, each with their own military liaison, and a plan for a minimum viable product, or MVP. Their goal is to create prototypes of products for use by the Department of Defense and intelligence community.

“I think this class brings all those pieces together,” Blank told Task & Purpose. “The military knows how to do that in wartime, but it defaults to the most bureaucratic organization in the world in peacetime … the problem is that our adversaries are now disrupting us 24/7 in different parts of the world and we need the agility to respond.”

The first class began on March 29 and over the course of eight weeks, students take national security problems and learn to apply startup practices by working closely with their consumers, or in this case, members of the military and intelligence communities, to ensure the end product meets their needs.

Related: Why now is the time to establish a standalone cyber force »

One of the teams, calling itself aquaLink, is working on a prototype that enables Navy divers to monitor their physiological conditions under water; Team Guardian aims to develop countermeasures for cheap off-the-shelf commercial drones in anticipation for the day adversaries learn to weaponize them; and another team, called Skynet, plans to construct a small drone for use by ground troops as a surveillance asset.

Not all of the students’ ideas are focused on creating new hardware. For example, team Narrative Mind is trying to understand and disrupt enemy groups online — the Islamic State’s social media apparatus comes to mind.

While some in the military and intelligence community may be initially skeptical about college students designing equipment and technology for use by intelligence analysts and troops on the ground, the student’s military liaisons and instructor’s aren’t.

“A lot of these students had no idea that these problems are out there, and that they could get involved,” said Joe Felter, a retired U.S. Army Special Forces colonel and one of the course’s instructors. “They get that they’re able to take this very successful methodology … and modify it, so you can actually take this and apply to military and intelligence.”

Another team, Right of Boom, initially set out to create new hardware and equipment for bomb technicians, but after a little coaching, they went back to the drawing board, and suited up. In bomb suits. Now, the team is trying to create a better way to provide high-volume, accurate reporting after an improvised explosive device attack.

To better understand the needs of explosive ordnance disposal technicians, one of the team members from Right of Boom tested out their prototype while wearing a bomb suit.

The student’s willingness to change direction on a product and pursue a new course of action based on the needs of the consumer is what makes Blank and Felter believe they’re helping to create something new, and hopefully, long lasting.

Blank said that he envisions the course as a sort of technology-based Reserve Officer’s Training Corps and that the program is a way “to serve your country without putting a uniform on.”

Felter said he hopes the course, and other classes like it, will trigger a generational change.

“To develop a generation of engineers, computer scientists, and students from other disciplines who are aware of these problems and may be more inclined to get involved various other capacities,” said Felter. “We’re planting the seed now, but we’ll reap the returns on that investment down the road in multiple ways.”