How The IED Rocked The Modern Battlefield

The face of the man who wanted to kill me wasn’t immediately visible — the photo of him required close... 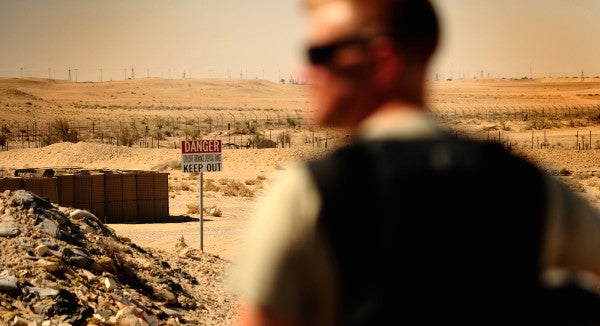 The face of the man who wanted to kill me wasn’t immediately visible — the photo of him required close examination. My company commander took the picture while deployed to Iraq in 2005. On a noontime reconnaissance mission, he’d captured a million-dollar snapshot: a man in a ghillie suit emplacing an IED at midday. Except my commander didn’t notice; he only realized it when he returned to his outpost and reviewed the images. Under camouflage netting, in 100-degree-plus heat, a man lay perfectly still, as if staring down the camera — singularly focused. My commander’s unit never caught the man in the ghillie suit. I’ve never forgotten the image.

An anecdote in Brian Castner’s sweeping and meditative book, “All The Ways We Kill and Die,” reminded me of this story. Castner has written an analysis of the IED, its impact on the Iraq and Afghanistan wars, and its devastating effects on the explosive ordnance disposal community. Castner writes as a journalist and a scholar, but he also writes from personal experience leading EOD technicians as an Air Force officer. In one segment, he relates the experience of tracing a command wire from an IED site and finding the spot where the trigger man, long since departed, would have initiated the device:

The wire ended several feet inside the shoulder-high culvert. A large battery pack lay there, plenty of juice to overcome the resistance of so much copper between here and the bomb. No other sign of human occupation—no cigarette butts or discarded food scraps or sandal impressions in the dust—nothing to see, except this, which made my stomach flip twice:

Scrawled across the inside of the smooth concrete wall was a perfect depiction of our Route Clearance Patrol. Drawn in dark chalk as a profile view, like an ancient cave painting, each vehicle in the childish sketch was blocky but unmistakable: the smaller RG, the high-wire Husky, the fat Buffalo with a three-fingered stick-figure claw, the JERRV, a tiny Humvee, more RGs behind…

We looked down at the sketch. The JERRV [Castner’s truck] was circled in black and crossed out with an X.

That is to say, someone clever and daring wanted to kill him and his brothers. They even drew a picture. Castner comes to terms with an unpleasant realization: that the whole of human ingenuity and creativity, the brilliance of the inventive mind, was scrawling out a plan for his death in a childlike hand. Castner’s book is about the explosive ordnance disposal crews who worked to ensure that these bombers failed, but at its core it is an elegy to a brother-in-arms he lost when they succeeded. Much of the text is rumination upon the life and death of Air Force Tech Sgt. Matthew Schwartz, his close friend, killed in Afghanistan in January 2012.

Related: This Iraq War vet’s new novel is as tragic and darkly funny as it is honest »

Castner refuses to flinch in his depictions of what Schwartz’s life and death entailed. Of this book’s many strengths, perhaps most notable is its willingness to confront horror unrelentingly — furiously, even. In his description of Schwartz’s autopsy, he writes:

… Matt died from generalized trauma throughout his body. He wasn’t wearing his seat belt and combat harness, perhaps because they had just remounted after clearing an IED, perhaps because he hated it and had nightmares and didn’t want to get trapped in a burning truck. Whatever the reason, the collision of his body on the ceiling broke half his ribs, fractured his pelvis, and disconnected his internal organs from one another … every one one of the bones in his feet were liquefied, and bags of mush filled his boots.

There are many more recollections like this one. “All The Ways We Kill and Die” occupies a space somewhere between rage and redemption, a purgatory of loss reported as unflinching testimony. It is in many ways a messy work, evinced by both in its sprawling narrative and its willingness to confront the true mess of human conflict, the once-living detritus so often reduced to numbers. Witness, for example, Castner retelling in vivid detail the nightmare of a vehicle crew trapped in a burning MRAP by the bomb-proof doors:

The armor absorbed the blast, but the tire burst into flame. It melted through the doors seals and rapidly moved inside the truck, spreading through the flammable interior, a wind-whipped desiccated grassland of seat covers and uniform fabrics.

But, that’s just the vehicle. As for the crew, Castner says, “The meat slides off the bone like greasy pork short ribs cooked all day in an Alabama smoker.”

To call it intense is to cheapen its power. Castner’s writing is as horrifying as it is illuminating.

Much of the book is digressive as well — we learn of the birth of new acronyms and new airframes, of the stop-and-go careers of EOD techs and unmanned aerial vehicle pilots, of triangulated best-guesses about the bombers and IED manufacturers. I could have done without the fictionalized portions, which imagine dialogue and backstory about the IED mastermind Castner names “al-Muhandis,” or the Engineer. Weighed down by Pashto and Arabic loanwords, and by a desire to capture the speech of Islamists through direct translations, these portions seem more like orientalist exotica. And some readers may tire of the long digressions about military hardware. However, these are the rare moments when the book loses its momentum.

Otherwise, it is entirely riveting. Castner’s writing shines when he breaks down what he knows best into images: horrible, memorable, evocative, and searing pictures of the individual moments that amount to the worst (or final) days of so many lives. It shines when he talks about a friend whose leg has become a “nubbin” after amputation, with skin that “folds and puckers and sweats, creating boring abscesses that tunnel beneath fatty flaps and stink.” It shines when he describes the duty of an EOD tech running an X-ray on a conveyor belt of Pentagon fatalities from Sept. 11, each body more putrefied than the next, or how the same EOD tech became an amputee, how “seven years later he would still be examining the evidence of war, picking through body parts until he provided some of his own.”

Castner’s writing shines because of his willingness to hold his readers’ faces toward the abyss when they would rather turn away. We would all do well — as veterans, as citizens — to be so brave.

“All The Ways We Kill and Die” (Arcade Publishing, 2016) by Brian Castner is available for purchase beginning March 1.