"I essentially had to start over as a newborn in a 33-year-old man’s body." 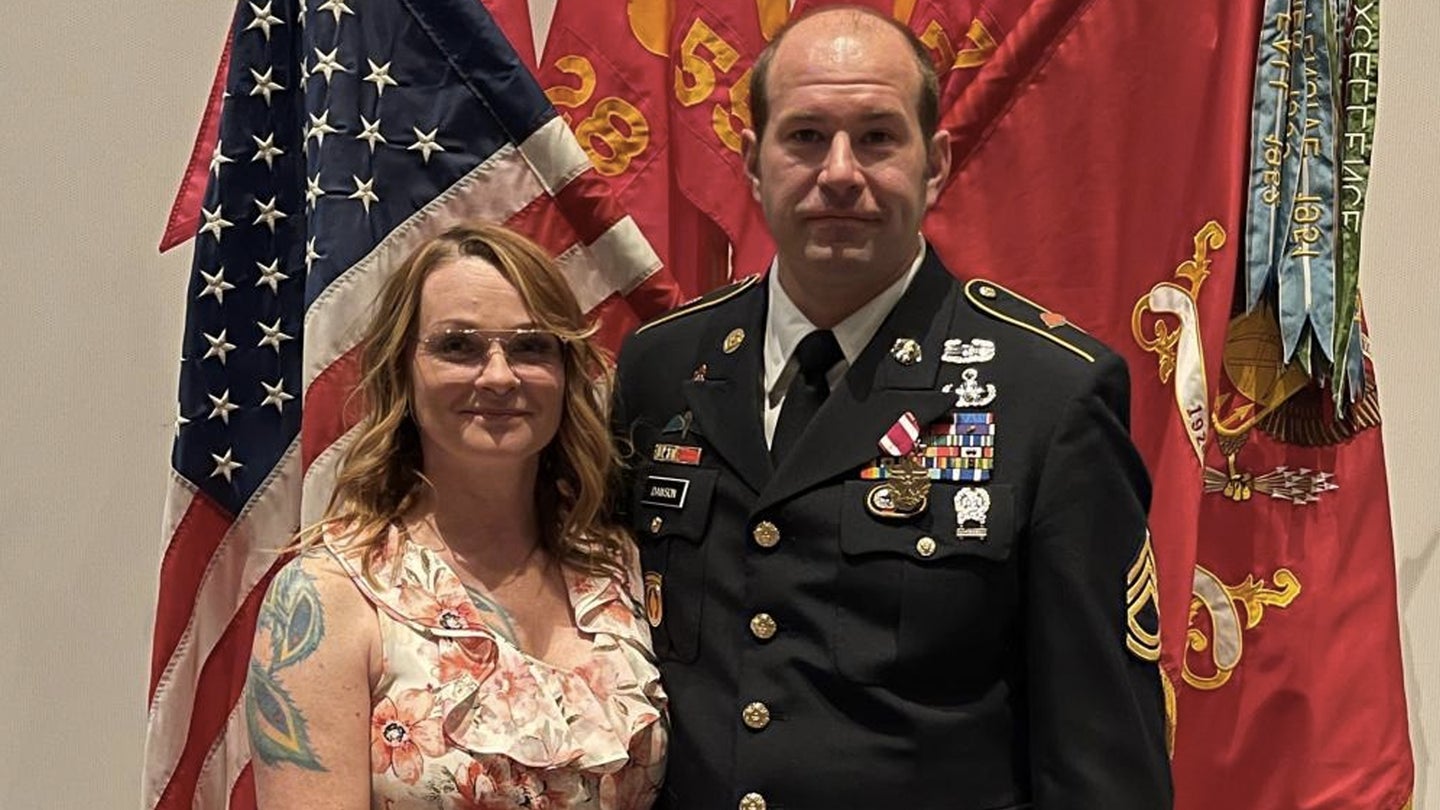 The most decorated soldier in an elite Army explosive ordnance disposal company retired last month after a legendary career that included defusing hundreds of bombs, saving the lives of countless service members, receiving the country’s second-highest award for valor, and nearly dying under fire at least twice.

Sgt. 1st Class Jeffery Dawson, a member of the 28th Ordnance Company (EOD), which often deploys with the Army’s 75th Ranger Regiment and other special operations units, retired on May 17 after recovering from a gunshot wound he sustained in Afghanistan in 2019. The bullet left him paralyzed from the chest down, but with the help of physical therapists and his own ‘never-quit’ attitude, he learned to walk again and completed a 3.1-mile unassisted walk less than a year after he was shot.

In recognition of his achievement, Dawson became the first Army bomb tech to be upgraded from an “honorary member” of the Ranger Regiment to a “distinguished member,” which the soldier said was the highlight of his career.

“I was surrounded by people who wanted to be there,” Dawson said, according to an Army press release. “It has been an honor working with the 75th Ranger Regiment. Their expertise and professionalism set the standard for others to look up to.”

Dawson’s career is a microcosm of the unique strains of the Global War on Terror on the U.S. military and on the explosive ordnance disposal community in particular. After first deploying to Iraq with the 722nd EOD Company, the Coalville, Utah native was selected for the 28th Ordnance Company, a small unit of handpicked, highly-trained EOD soldiers. During his six years with the 28th, Dawson deployed to Afghanistan seven times. Other EOD soldiers faced similar burdens, as coalition troops in Iraq and Afghanistan contended with thousands of improvised explosive devices that needed to be disabled.

“Many maneuver elements relied heavily on the skill and competency of EOD technicians. Not just from the Army but all services.” Dawson said. “I often overheard many members of the elements we’ve supported say that they would never go outside of the wire without EOD on the manifest. That’s what makes EOD techs so important to the military.”

EOD troops rendered safe more than 100,000 improvised explosive devices in Iraq and Afghanistan since 2006, the press release said, several hundred of which were defeated by Dawson himself. The tech disabled several during one particularly brutal mission in 2013.

“As an EOD tech, the most memorable missions stand out because they were either really good or really bad,” Dawson said. “Working with special operations forces, you often find yourself in situations where the outcome can sway in either direction in a moment’s notice.”

One of those missions happened in Afghanistan on Oct. 5, 2013. Dawson and several other soldiers set out to capture or kill a Taliban leader. The threat of improvised explosive devices was low and the leader was supposed to be an easy target, Dawson explained.

“Upon infiltration everything changed in minutes,” he said.

The trouble started when three explosives detonated at the gate of the enemy compound almost simultaneously, including two pressure plate IEDs and a suicide vests worn by a woman living in the compound, wounding eight soldiers. A Taliban fighter also detonated another suicide vest, killing the team’s military working dog, Jani. The blast also seriously injured Dawson in the leg, but he was the only bomb tech on the team, and with pressure plate IEDs surrounding them, Dawson stayed to finish the job.

The EOD technician checked for more explosives and cleared a route towards the casualties from the earlier blasts. But while soldiers treated the wounded, soldiers another string of pressure plate IEDs went off, instantly killing a combat nurse assigned to the team. Two more soldiers were fatally wounded by IEDs mere moments later, and another soldier helping evacuate wounded soldiers onto a helicopter was also critically wounded. Dawson established a casualty collection point and began the tedious work of clearing lanes through an IED-infested area for evacuating casualties.

“This scenario, one of the most complex in explosive detection, required Sergeant Dawson to repeatedly expose himself to active [pressure plate IEDs] under limited visibility conditions,” said Dawson’s award citation. “His markings of safe paths ensured efficient movement across the objective and limited additional casualties, as members of the assault force continued to maneuver in an effort to render aid.”

The soldier used his metal detector and his own eyes to locate the explosives, and then he used chemical lights to mark safe paths, but the horror was not over. At one point, a soldier set off a tenth explosive, losing both his legs, rupturing one of Dawson’s ear drums and sending even more fragmentation into his body.

When Hargis was stabilized, Dawson then helped clear a route back to the casualty collection point and reported the situation to newly-arrived bomb techs before a staff sergeant realized how badly Dawson was wounded and ordered him to get on the next casualty evacuation. As bad as the mission was, it could have been even worse if not for Dawson’s heroic actions clearing paths for medics and reinforcements.

“Despite being wounded by two separate IED detonations, Sergeant Dawson endured the most horrific circumstances while consistently pursuing the preservation of life,” the citation read. “Sergeant Dawson remained on the objective for over two hours traversing an ambiguous and chaotic objective where he located three confirmed PPIEDs and an additional six suspected devices.”

The EOD tech was awarded the Distinguished Service Cross, the country’s second-highest award for valor, for his actions, but that was far from the end of Dawson’s bomb disposal days. Like the rest of his career field, Dawson and his skills were desperately needed on the front lines, despite them often not having the same level of resources and staffing as their fellow soldiers.

“While fewer than 100 bomb techs have served in the [28th Ordnance Company] during its decade-long existence, they have carried out more than 5,000 combat missions, according to members of the unit,” The New York Times reported in 2019. The Times also reported that members of the 28th had to fight to get the same uniforms, body armor and medical care issued to their special operations colleagues. Dawson himself suffered from infections in his right arm when it took him seven and a half months to get a medical appointment at Fort Bragg to pull out the remaining fragments from one of the bomb blasts he sustained in 2013. It was only when his arm swelled up while preparing for another deployment that he finally got an appointment.

“It would get real hot, so I was like, ‘These things are a real issue. They need to come out,’” Dawson told the Times, adding that the procedure took a mere 15 minutes.

The EOD tech went on to fight another few years before he was accidentally shot by an American advisor while on a mission in Afghanistan in July 2019, according to the New York Times.

“When I was shot, it came in my right arm and came to rest upon impacting and fracturing my left shoulder blade, collapsing both lungs and exposing my spinal cord in the process,” Dawson said in the recent Army press release. A medic saved his life by using a chest tube to inflate the soldier’s collapsing lungs.

“I’m thankful for the expertise of the medic that performed life-saving treatment which allowed me the opportunity to live despite all odds,” he said.

Dawson was airlifted to Germany for surgery before eventually landing in the James A. Haley Veterans Hospital in Tampa, Florida, which specializes in spinal injuries. No doubt using the same mentality that got him through seven deployments and the horrific 2013 mission, Dawson slowly learned to stand and walk again, and within a year of his injury, the soldier walked 5 kilometers unassisted. He has since walked a 10k and took part in a triathlon where he swam a quarter-mile, biked 11 miles, and walked a 5k without help.

“The key to my recovery was mostly mental,” he said. “I lost control of everything from the chest down, with that I lost any physical conditioning prior to my injury. I essentially had to start over as a newborn in a 33-year-old man’s body … Since I am still trying to relearn everything, I have to keep a positive mental attitude so I can continue to progress.”

One might think that seven deployments and recovering from paralysis is enough for one lifetime, but Dawson is continuing to push himself physically and intellectually. The 35-year-old North Carolina resident wants to “remain active” as much as possible,  he said. “I enjoy hunting, fishing, hiking and other outdoor activities that get my heart pumping. In the future, I would like to complete a mud run.”

The Army veteran has also enrolled in college and wants to find ways of helping other vets, the press release said. That kind of outreach seems to be in keeping with Dawson’s humble spirit, as described by Maj. Stephen Knudsen, commander of the 28th Ordnance Company.

“He’s a legend in the career field, yet he’s such a light hearted, funny and genuine person,” he said. “If there was anyone who has earned the right to be super arrogant or macho, it’s him, but instead you’re greeted by a humble guy with a warm grin wearing a cat shirt.”

Dawson himself would probably say he’s no different than any other member of the 28th.

“What makes the 28th a great company is that it is filled with specially selected and well trained soldiers who will never accept defeat and never fail to complete the mission,” he said. “Soldiers who have the willingness to shoulder more than their share of the task, whatever it may be, one hundred percent and then some.”