This military graphic on electronic warfare should give everyone nightmares 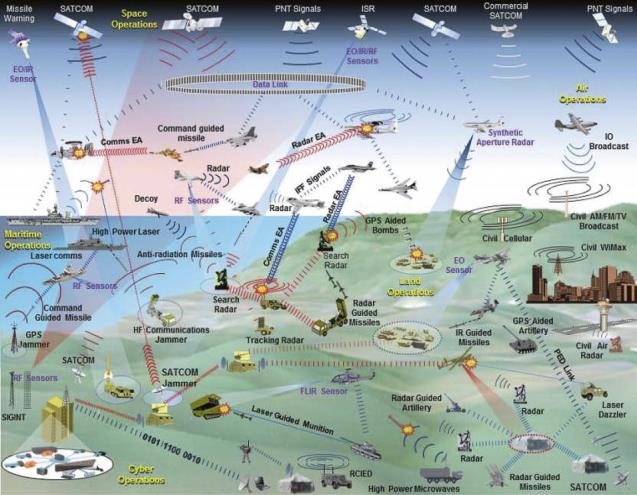 The military does a lot of things well. However, one of the things it seems incapable of doing is making an infographic that doesn’t make viewers want to gouge their eyes out.

On Thursday, the above image began making the rounds on Twitter when it was shared by defense reporter Paul McLeary. Immediately, commenters began to speculate that it was actually just a new edition of Chutes and Ladders, or perhaps a never-before-seen painting by Russian abstractionist Wassily Kandinsky. Others wondered where Waldo was — as if all they had to do was look close enough and they’d see him wearing woodland cammies and hiding behind a generator.

But for many Global War on Terrorism-era veterans, the image brought back fears of painfully long PowerPoint briefings. Fortunately, it doesn’t appear to be part of a slide deck, though it was included in a recent jargon-packed congressional report on the military’s efforts to meld its networks into one single system.

As for where it came from, the image originally appeared in the October 2018 issue of a journal put out by the NATO-sponsored Joint Air Power Competence Centre. In it Commander von Spreckelsen — and yes that’s the byline — included the graphic, titled “Figure 1,” in his description of electronic warfare, describing it as:

“A military action that exploits electromagnetic energy, both actively and passively, to provide situational awareness and create offensive and defensive effects’. It is warfare within the Electromagnetic Spectrum (EMS) and (shown in Figure 1) involves the military use of electromagnetic energy to prevent or reduce an enemy’s effective use of the EMS while protecting its use for friendly forces.”

In layman’s terms, the image is attempting to depict all the different ways electronic warfare works in today’s environment, from knocking out comms to disabling an enemy’s systems while defending your own to creating little circles in the sky that — well, actually, I don’t know what that’s supposed to signify.

Anyway, what we got instead was a pop art masterpiece that looks like it was created by Rear Adm. Andy Warhol.

Honestly, this DoD chart deserves to go into the Hall of Fame next to the McChrystal Afghanistan COIN spaghetti PowerPoint slide. pic.twitter.com/ieR3UxCphD

Among veterans of America’s most recent wars, these kinds of graphics hold a special place in our hearts. Needlessly confusing, twice as cluttered as they should be, and always presented with weird font and color combinations, they can transform the most basic concept into an abstract problem that even the late Stephen Hawking couldn’t wrap his mind around. This becomes compounded when the topic is already complex.

There’s no shortage of examples of these kinds of images being used to subject active-duty troops to “death by PowerPoint” either, though the most famous is likely Gen. Stanley McChrystal’s attempt at an M.C. Escher illustration:

That particular slide made its way into a New York Times story, a movie parodying his time as the top U.S. commander in Afghanistan, and seared itself onto the retinas of any U.S. service member unlucky enough to sit through a presentation on counter-insurgency operations in the late 2000s and early 2010s.

Who knows, maybe this latest addition to the dumpster fire that is military graphics will be so ruthlessly mocked that the practice stops entirely. Or, more likely, that mockery will just lead to a lengthy presentation on how best to create supporting slides and images.

Related: This is a real slide from an Air Force brief on the real threat of incels