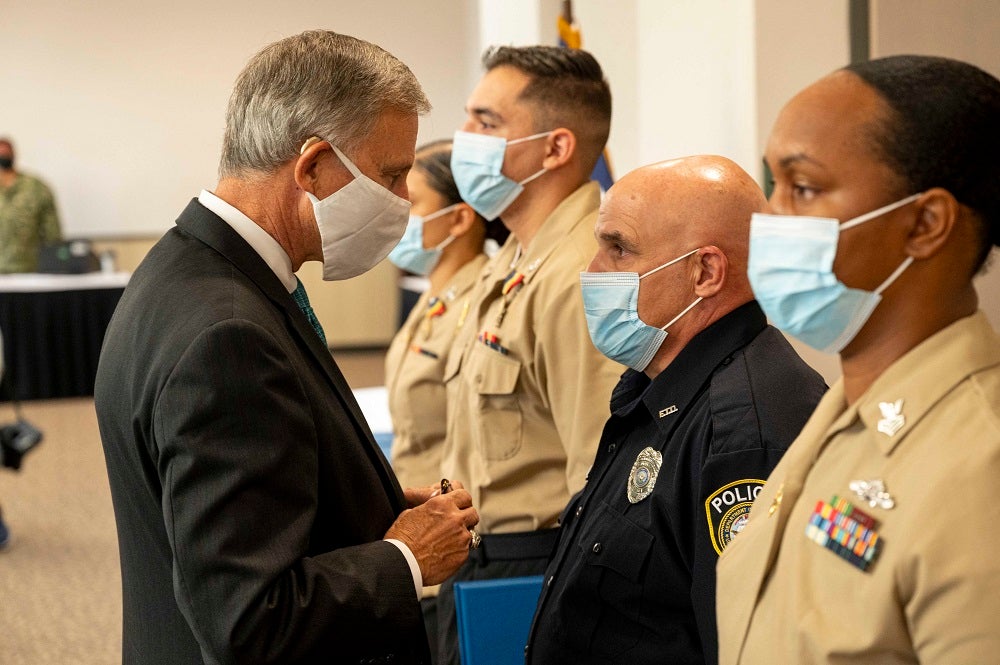 The Navy has awarded 11 sailors and one civilian for their bravery in response to an attack on Naval Air Station Corpus Christi, Texas, on May 21, according to Navy officials.

One sailor was wounded when a gunman opened fire at the base. The FBI later identified the suspected shooter, who was killed in the attack, as Adam Salim Alsahli.

“I am honored to be able to present these awards today,” acting Undersecretary of the Navy Gregory Slavonic said during an Oct. 8 ceremony. Five months ago, these individuals’ rapid, decisive actions, and their courage under fire, ensured no loss of life. This surprise assault could have been deadlier, but they utilized their training and responded swiftly and exceptionally thwarting the nefarious intent by the intruder.”

ICYMI: The Honorable Gregory Slavonic, acting Under Secretary of the Navy, presented awards to NAS Corpus Christi Naval Security Force personnel, 11 Sailors, and one civilian, who stopped a gunman on May 21st of this year. BZ shipmates! ?

At 6:15 a.m. on May 21, Alsahli allegedly opened fire with a pistol as he was trying to drive onto the base, a Navy news release says. The bullet struck Master-at-Arms Second Class Petty Officer Yaisa Coburn, who was thankfully wearing a protective vest.

Even though she had been hit, Coburn activated a barrier that stopped Alsahli’s car from going any further, radioed dispatch, and returned fire.

After Master-at-Arms Third Class Petty Officer Levi Milligan, got into his chase vehicle, Alsahli allegedly got out of his car and started shooting at Milligan with a semi-automatic rifle, the Navy news release says.

Alsahli allegedly then opened fire on other security forces personnel who arrived at the scene until Coburn and Milligan “neutralized” him, the news release says.

While the scene was being cleared, Federal Officer Stuart Levitt noticed a package inside Alsahli’s car that looked like a possible bomb, according to the news release. Levitt ordered the watch team to evacuate personnel in the area to safety.

Both Coburn and Milligan have received the Navy and Marine Corps Medals, which are the highest non-combat decoration awarded for heroism, for risking their lives to stop Alsahli from entering the base, the Navy news release says.

Levitt received the Distinguished Civilian Medal for Valor, the highest honorary recognition the Secretary of the Navy can award to a civilian employee, for his heroism.

Seven sailors who responded to the scene received Navy and Marine Corps Commendation Medals for their meritorious service under fire, and two other sailors were recognizes for securing other gates to the base and helping first responders get onto the base: Master-at-Arms Third Class Petty Officer Colby Gillette and Machine Accountant Seaman Edmond Cristal.

The seven Sailors that responded to the scene were awarded Navy Commendation Medals, presented for meritorious service under fire.

Two ‘other sailors, Master-at-Arms Third Class Petty Officer Colby Gillette and
Master at Arms Seaman Edmond Cristales, were also recognized for their responsiveness in securing the South/Main Gate to all traffic and establishing an emergency entry for responding mutual aid assistance.

“I am extremely proud of our Security personnel,” Capt. Chris Jason, commanding officer for Naval Air Station Corpus Christi, said in a statement. “The sailors who first encountered the shooter displayed tremendous courage and took immediate action under fire that allowed Naval Security Forces to respond quickly and effectively. The NSF team promptly contained the situation and prevented the suspect from gaining access to the base, its employees and residents. They definitely saved lives.”

Related:Navy SEAL who saved 3 kids from drowning receives medal for his heroism