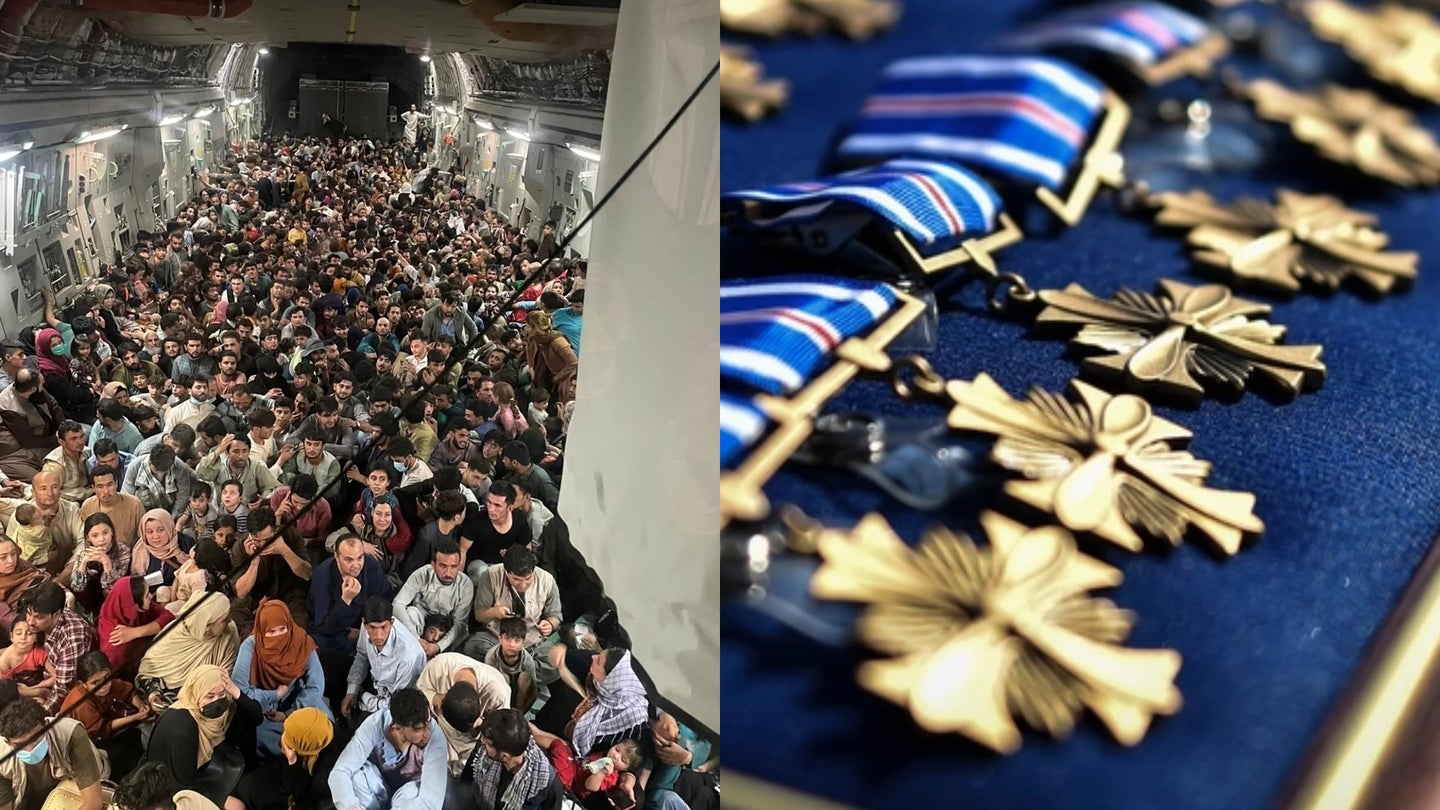 Just over a year after taking off with an unprecedented 823 evacuees aboard their C-17 transport jet, the crew of callsign Reach 871 has received one of the U.S. military’s highest decorations in recognition of their performance in an incredibly chaotic situation during the Afghan airlift.

“Their actions were performed at an immense personal risk and today these airmen received their decorations, denoting their heroism beyond what is normally expected,” said Air Force Gen. Mike Minihan, the head of Air Mobility Command, at a ceremony on Tuesday at Joint Base McGuire–Dix-Lakehurst, New Jersey, where he awarded the crew with the Distinguished Flying Cross.

The aircrew made international headlines on August 15, 2021, when a photo showing the cargo bay of their jet completely full of people went viral. The C-17 is supposed to carry only about 400 people at a time.

“OK, how many people do you think are on your jet?” an air traffic controller asked the flight crew that day, according to audio first obtained by Defense One.

The controller was taken aback upon hearing the crew’s response. “Eight hundred people on your jet?” the controller asked. “Holy … holy cow.”

Nothing about the situation at Hamid Karzai International Airport in Kabul, Afghanistan that day was safe. August 15 was the same day the world saw horrifying images of Afghans rushing the airfield to try to secure spots on what they perceived to be the last jets out of a country rapidly falling back to Taliban rule. One of the jets caught in that sea of desperation was Reach 871, whose crew were forced to make a difficult decision on the spot: either take off safely without as many evacuees aboard and leave the rest to the Taliban, or cram as many people as possible on the jet and hope for the best.

“I hope they’re recognized for it, because that’s a gutsy call, and they made the right one,” one anonymous C-17 pilot told Task & Purpose at the time. “They didn’t know at take-off how many people they had on board, and then they did a count and they got 640, which is just an incredible amount of people to have on a jet.”

The count was later updated to 823 people. Of course, there were still hundreds of people outside the C-17 and on the runway, which is an awful spot to be in as an aviator. But at some point, you just can’t fit any more people on board.

“My heart breaks for that crew,” the pilot said. “If there was a way to get those people out of there, they would have done it.”

The pilot likened the scene to that of the Titanic, the massive ocean liner which sank in the North Atlantic in 1912: Everybody onboard wanted to try to get on to the lifeboats, but if too many did so, the lifeboats would sink.

“If the C-17 stopped, they might have torn it apart, or they might have had weapons or grenades,” the pilot said. “And if the C-17 couldn’t take off or was damaged, then it would have blocked the runway, and then nobody gets out.”

Taking off with an overloaded jet was not the only challenge the crew faced. The thin air of Kabul, which sits at the high altitude of about 5,900 feet, means there is less air to generate lift below the plane’s wings, which was made worse by the fact that the summer heat made the air even less dense than usual. Without knowing how much weight was in the back, the crew likely did not know how much runway they would need to get airborne, whether they would have enough lift to clear the mountains surrounding Kabul, or whether they would take small arms fire from the Taliban on their way out.

Then there was the flight itself, with nearly a thousand stressed-out passengers (and only one bathroom) aboard. But amid the stress and uncertainty was kindness, too. Along with the viral photo of the 823 passengers aboard Reach 871 was a second photo of just one passenger: a small Afghan child sleeping on the aircraft’s floor, using the camouflage uniform top of one of the crew as a blanket.

The top, which had been issued to the jet’s loadmaster, Senior Airman Nicolas Baron (an airman first class at the time), was later donated to the National Museum of the U.S. Air Force at Wright-Patterson Air Force Base, Ohio, one of several artifacts documenting the Afghan airlift.

“In the early phases of this operation all that we were hearing on the news was how bad the situation was,” Stuart Lockhart, historian for the 305th Air Mobility Wing, where Baron is based, said when the donation was announced in October, 2021. “And then to have this touching image come out of just a simple humanitarian gesture, it made such an impression on our country and our world. It’s absolute gold.”

The crew was presented the Distinguished Flying Cross with “V” device denoting valor in combat. Laurent and Johnson are the first flying crew chiefs in Air Mobility Command history to receive the DFC, according to the Air Force.

The Reach 871 flight broke the record for the most people aboard a C-17 flight, but it was only the start of Operation Allies Refuge, which saw more than 124,000 people evacuated from Kabul. In fact, just 12 hours after the flight, Kut and his crew flew back to Kabul to drop off 231 U.S. troops and pick up another 297 civilians, according to the Air Force.

Amid such a large operation, Reach 871 crew represents only a fraction of the 96 Distinguished Flying Crosses and 12 Bronze Star Medals that Air Mobility Command announced last month that it would award to airmen who participated in Operation Allies Refuge.

Eleven other airmen were awarded the DFC or Bronze Star at the ceremony in New Jersey on Tuesday. These included Capt. Jedd Dillman, a flight nurse, and Master Sgt. Matthew Newman, a respiratory therapist, who became the first aeromedical evacuation aircrew members in the history of Air Mobility Command to receive the DFC, according to the Air Force.

No doubt more untold stories from Operation Allies Refuge will become public as the Air Force awards DFCs and Bronze Stars to the airmen who took part in it. Until then, hats off the Reach 871 for a job well done.

“You are now giants whose shoulders we stand on because you decided to act when called upon,” Minihan said at the ceremony, “putting your lives at risk so people you didn’t even know could have hope for a different life.”