"He was practically Chewbacca in ‘A New Hope.'" 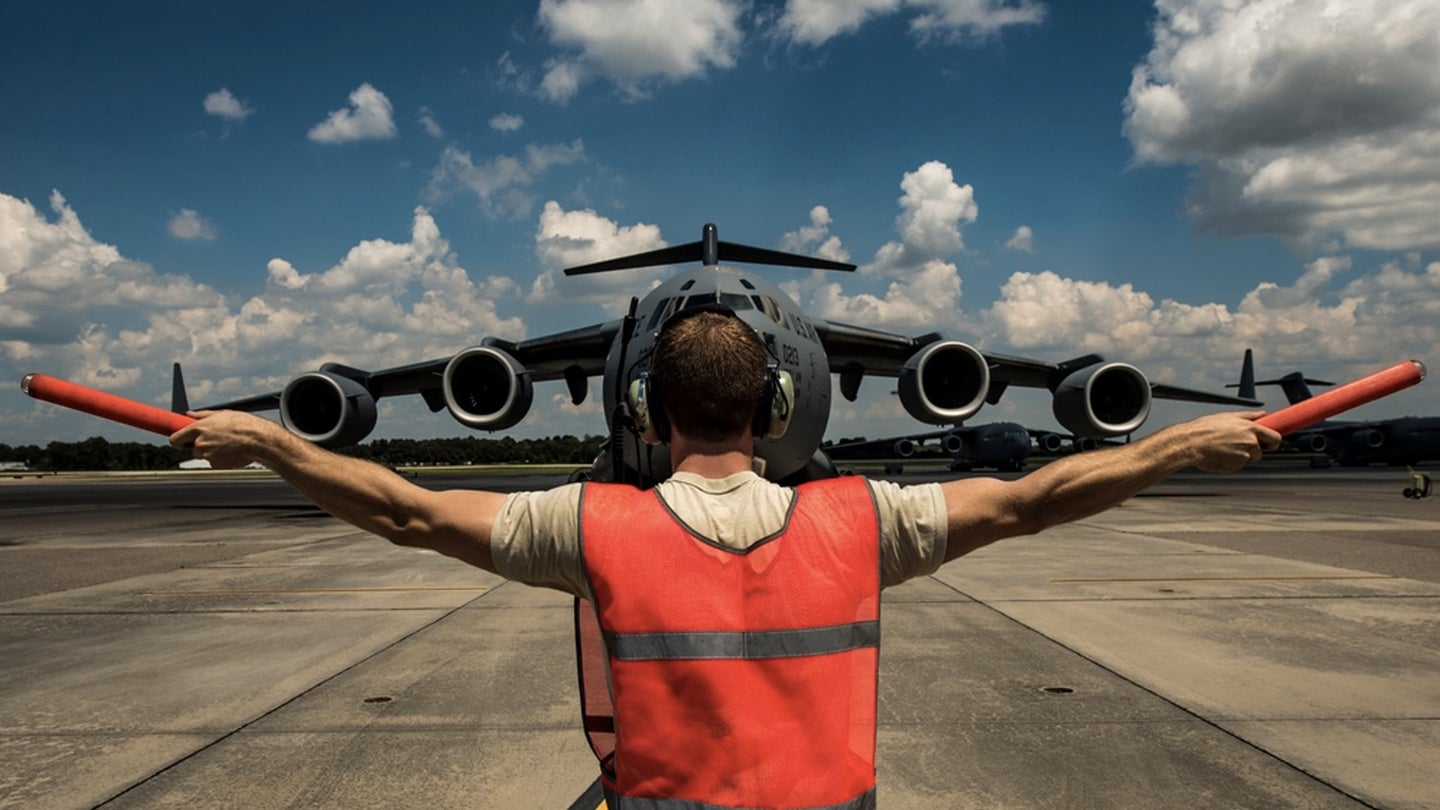 The Air Force recently honored four of its airmen for their performance during last year’s evacuation of Kabul, Afghanistan by awarding the Distinguished Flying Cross. But many airmen are fuming after noticing that one of the crew did not receive the prestigious award, despite playing a key part in the mission. That airman was the flying crew chief, Staff Sgt. Dennis Gonzales-Furman, of the 437th Aircraft Maintenance Squadron.

Gonzales-Furman and his fellow airmen were flying members of the Army’s 82nd Airborne Division to Kabul aboard a C-17 cargo jet on Aug. 15 when thousands of civilians breached the airfield at Kabul’s Hamid Karzai International Airport. The civilians were fleeing the Taliban, who had just seized control of the capital city.

“The conditions that day were like none I had ever seen,” said the aircraft commander, Lt. Col. Dominic Calderon, of the 301st Airlift Squadron according to an Air Force press release. “The airfield was breached and there were mass crowds entering.”

“The crew performed well under enormous pressure,” Calderon said. “I couldn’t be more proud of the way the entire crew operated.”

Calderon, Anderson, Foster and Geller were awarded the Distinguished Flying Cross, which is for service members who distinguish themselves in combat through heroism or extraordinary achievement in aviation. Though Gonzales-Furman did not receive the same medal, Calderon recognized his contribution to the mission.

The crew chief “went so far above and beyond that evening,” the aircraft commander said at the award ceremony, according to The Vacaville Reporter. “If I had a game ball that night, I would have given it to him.”

An Air Force official speaking on the condition of anonymity told Task & Purpose that Gonzales-Furman had been submitted for a Distinguished Flying Cross along with the rest of the crew but, for reasons unknown to the official, it was denied. However, a request has been resubmitted and, to the official’s knowledge, the decision whether to grant an award to Gonzales-Furman is still being made.

Based on their reaction to the initial news of the awards, it’s clear what many airmen think is the right decision.

“That crew chief experienced the same thing as those ‘operators’ and went through the same stress and had a job to do,” said one Air Force crew chief speaking on the condition of anonymity since he was not authorized to speak with the press.

Dozens of commenters on the unofficial Air Force subreddit agreed with him.

“He was practically Chewbacca in ‘A New Hope,’” said one commenter on the Air Force subreddit, referring to a character in the first Star Wars movie who, unlike his peers, was not given a medal despite helping blow up a superweapon called the Death Star.

“DFC is a big fucking deal. These airmen deserve it,” wrote another, before later adding, “We didn’t fly unless our crew chiefs had their shit together. And they always did.”

Flying crew chiefs are a special job in the Air Force. Crew chiefs are experienced maintainers who are assigned to individual aircraft and are responsible for taking care of it when it’s not in the air. Though many crew chiefs stay on the ground, flying crew chiefs actually fly on the aircraft they maintain, providing their technical expertise for the full-time aircrew and keeping the machine running smoothly. Most of the Air Force fleet consists of large, complicated platforms that suffer from spare parts shortages and old age, so it can sometimes be a handful just to keep the planes airborne.

“Couldn’t tell ya how many questions I was fielding as shit broke in flight,” said one former Air Force C-130 crew chief who asked to be identified only as CL since he was not cleared to speak with the press.

“Pilots trust you and when it comes to the aircraft, you’re the [subject matter expert] on how everything comes together and works,” CL said. “Yes they have checklists, yes they have remedial actions, but once that aircraft lands you’re the one that makes the decision on if it’s taking off again.”

Besides providing mechanical experience, flying crew chiefs also fill in as helping hands for whatever needs to be done to accomplish the mission.

“I was an extra set of eyes scanning for threats, assisting load masters and aeromedical crews in addition to my duties that came into effect once we landed,” CL said. “There were times on a max duty day I was backing up pilots, keeping an eye on airspeed and keeping the mood light while we worked to hack the mish [mission].”

Flying crew chiefs had to chip in even more than usual during the Afghan airlift, where in addition to the usual challenge of flying a plane, crews also contended with large numbers of nervous passengers, an uncertain security situation, and back-to-back missions that stretched both aircraft and aircrew “to the limits,” one C-17 pilot said in August.

“C-17 FCCs were helping to deliver Afghan babies and were pulling body parts out of those aircraft,” CL said. “They had a job assisting in the security and success of that aircraft’s crew, cargo, and mission.”

It’s clear that flying crew chiefs often play a vital role operating Air Force aircraft, especially during intense missions such as those in Kabul last August. So why was Staff Sgt. Gonzales-Furman not awarded the way his fellow crew members were? The anonymous Air Force official said it was not for lack of trying, since all five of the crew members had been submitted for the award. The spokesman did not know the reason why Gonzales-Furman was declined, but said the approval authority for the awards was likely the 379th Air Expeditionary Wing, based at Al Udeid Air Base, Qatar, or the 816th Expeditionary Airlift Squadron, a provisional unit assigned to a tenant group of the 379th.

The 379th did not respond to a request for comment. However, there is a widespread understanding among airmen that Distinguished Flying Crosses are for aerial achievements, and since flying crew chiefs are not a part of the formal aircrew, they are technically not involved in flight. “The argument I heard was we’re not aircrew and don’t qualify,” said CL.

“In the past, we’ve been told FCCs are not eligible for aerial awards because they are technically ground personnel,” one C-17 pilot told Task & Purpose on condition of anonymity. “Which is bullshit in my opinion. We couldn’t do our job without them, especially during Kabul.”

The Air Force Personnel Center does not specify a distinction between aircrew and ground troops on its fact sheet about the Distinguished Flying Cross.

“The medal is awarded to any officer or enlisted person of the armed forces of the United States for heroism or extraordinary achievement while participating in aerial flight,” it says. “Both heroism and achievement must be entirely distinctive, involving operations that are not routine. This award is not awarded for sustained operational activities and flights.”

Other so-called “ground personnel” have been awarded the Distinguished Flying Cross in the past. For example, Gen. Douglas MacArthur, despite not being an aviator, was awarded a Distinguished Flying Cross for flying aboard planes under heavy enemy fire over Korea in the summer and fall of 1950. It must have been brave of him to do so, but he was not formally a part of the aircrew.

“That General MacArthur unhesitatingly took part in these extraordinarily important and dangerous missions is a further demonstration of the unfaltering devotion to duty which characterizes his every action as a leader,” said his award citation. “His conduct in these instances has been an outstanding source of inspiration to the men he commands.”

In a similar vein, Col. George Patton (son of the famous World War II Gen. George Patton), though also not an aviator, received the Distinguished Flying Cross for flying over and dropping into fierce firefights while using a helicopter as a mobile command post in Vietnam. Though most of the recipients of the Distinguished Flying Cross are aviators, the description of the award on the Air Force Personnel Center website does not limit recipients to aviators.

“FCCs can be treated like stepchildren, but my unit goes out of the way to take care of those guys/gals because they are worth their weight in gold,” said the anonymous C-17 pilot. “I have no idea how many times an FCC has saved our ass at a field without maintenance support.”

The pilot and one of the crew chiefs also gave a shout-out to the medics and security forces (the Air Force equivalent of military police) who flew on board C-17s into and out of Kabul. Though not ordinarily part of an aircrew, they earned their keep during the evacuation by providing expertise in a potentially dangerous humanitarian mission. “Unsung heroes,” the pilot called the medics.

The anonymous Air Force official said he empathized with airmen’s feelings on the matter. “I’m guessing there are a lot of people in [Gonzales-Furman’s] corner on that, especially the aircrew” of the C-17 he was on that day, the official said.

Part of the reason why airmen were upset by the flying crew chief not receiving a Distinguished Flying Cross is that it taps into a sense of injustice in the overworked Air Force maintenance community. Maintainers and security forces airmen are widely understood to be the most depressed members of the service, and data leaked to the popular Facebook page Air Force amn/nco/snco in 2020 showed a higher suicide rate among those career fields than the rest of the branch.

Indeed, a 2019 Government Accountability Office report said that aircraft maintenance is the largest enlisted career field in the service, with more than 100,000 active and reserve maintainers, but that’s still not enough because the branch can’t seem to retain experienced wrench-turners.

That’s a problem, because aircraft can’t fly without experienced people who maintain them. Still, the Air Force is trying to make things better. Last month, Chief Master Sgt. of the Air Force JoAnne Bass announced the launch of Fortify The Force, an initiative meant to connect airmen, Space Force Guardians, and family members in order to find better ways of handling the services’ mental health challenges.

“Our team is inclusive of all ranks and demographics and depends on your input to ensure we’re focused on initiatives that matter to you,” initiative members wrote on the group’s first Facebook post.

Though this might not be under Fortify the Force’s authority, it seems maintenance airmen do value one initiative: giving credit where credit’s due.