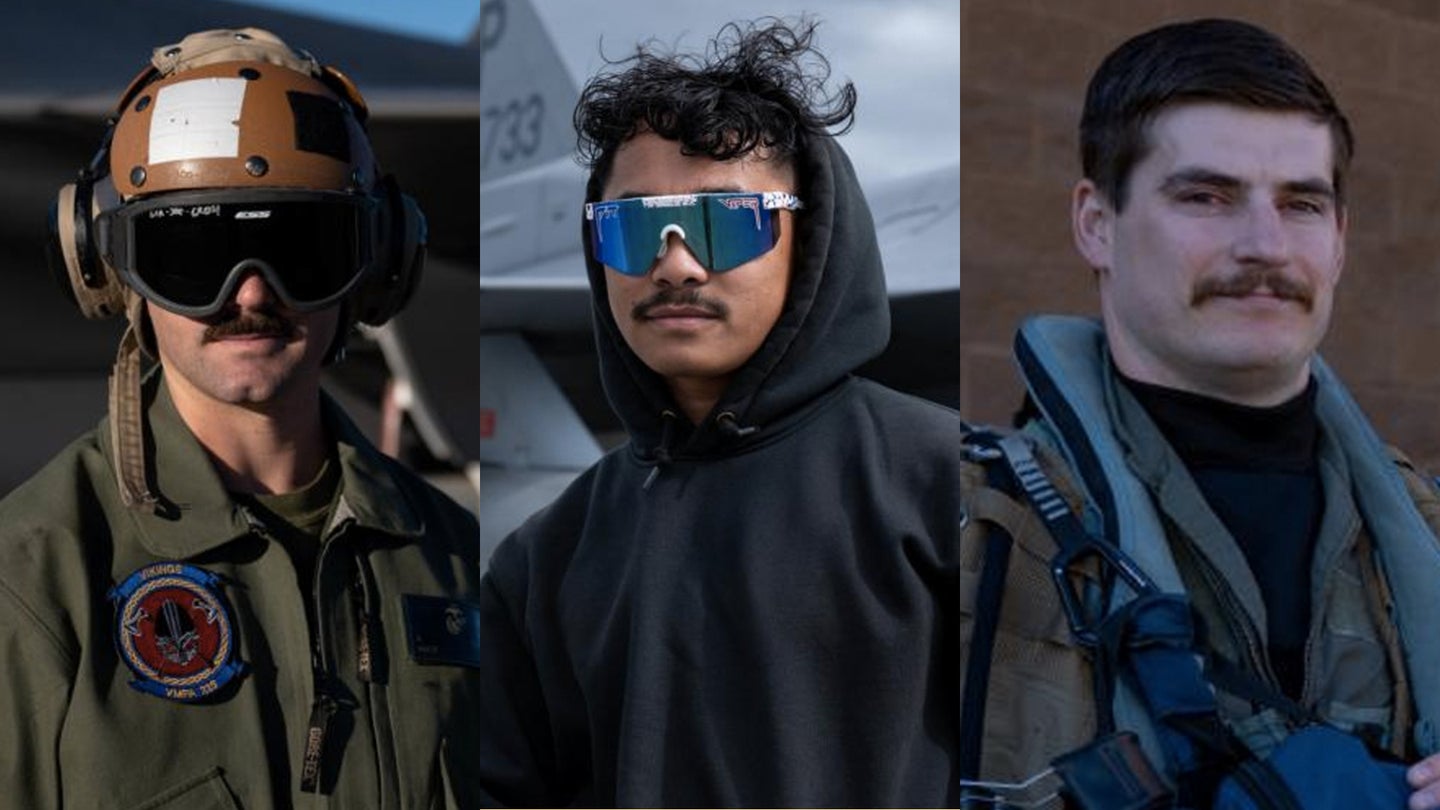 If you like airplanes, you’ll probably get a kick out of Red Flag, a training exercise where air and ground crews from across the military and around the world gather at Air Force bases to practice large-scale air combat operations. The exercise happens several times a year, but the latest edition of Red Flag at Eielson Air Force Base, Alaska, featured more than just fast jets: it also boasted mustaches, lots of mustaches.

Red Flag-Alaska “is a premier training event for joint units to bolster interoperability, during which some service members partake in the tradition of growing a ‘deployment mustache’ to increase a sense of morale and camaraderie among deployed service members,” wrote the Air Force in the captions for a photo album of portraits taken of service members from around the world who sported various models of upper lip armor at the exercise. The album features 21 airmen, Marines and sailors from the U.S. and Australia who are united by two things: they work on or fly airplanes, and they have “moostache” hairs.

Growing mustaches while away from home is a long-running tradition for U.S. service members. They may look bad—or at least, some look better than others—but they also symbolize something masculine or about growing a new identity within a group when everything else is unfamiliar.

“Your CAX [combined arms exercise] Stache will upset people,” wrote a Marine in 2010 about mustaches grown during the pre-deployment training at Exercise Mojave Viper. “They will wonder what abomination is growing on your face. They will make fun of it. They will ridicule you for it. But there will be no order to shave. They understand the tradition.

“But for all the jokes and bits of food caught in it, even though you’d never admit it, you enjoy your CAX Stache,” the Marine added. “You will compare it to others, and if yours is fuller and thicker you will feel superior. You will look down on the man who has to give up and shave after a week when his mustache doesn’t fill in.”

The Army feels the same way about field exercise mustaches.

“As annual training rolls into its second week, normally clean-shaven soldiers will be seen with stubbly hair populating their upper lips,” wrote a New York National Guard soldier in 2010. “This temporary mustache (and the facial hair we are talking about here is always temporary) goes by several names: ‘Field ‘stache,’ ‘AT ‘stache,’ and ‘Get that the hell off your face’ seem to be the most popular.”

Service members across the military seem to respect a nasty mustache. However, the Air Force is unique in that it has a superhero of field-grown super-staches. That superhero is Brig. Gen. Robin Olds, the fighter pilot who shot down 16 enemy aircraft in World War II and the Vietnam War. Olds had a penchant for getting into trouble with his superiors when he pushed for better training and tactics for fighters and for challenging the status quo. In keeping with this habit, Olds grew out an exquisite handlebar mustache while serving in Vietnam which was one of the Air Force’s greatest achievements in that war.

“It became the middle finger I couldn’t raise in the PR photographs,” Olds wrote in his memoir. “The mustache became my silent last word in the verbal battles … with higher headquarters on rules, targets, and fighting the war.”

The Air Force still honors Olds’ spirit every March during “Mustache March,” where airmen attempt their own version of Olds’ lip foliage … with mixed results. But for some airmen, Red Flag-Alaska became a chance to give it another go, all while racking up flying hours and fixing jets in a big, exhausting airpower party. Unlike the first and second Red-Flag Alaska exercises earlier this year, the third one focused more on air-to-air combat.

More than 70 U.S. and allied aircraft took part in the exercise. Though only 21 mustaches made it into the photo album, we salute those unsung heroes who went un-photographed. You can peruse the album yourself in the photos below: