“The male failed to obey the duty officer's repeated commands to stop walking towards him. The duty officer produced a handgun and shot the male.” 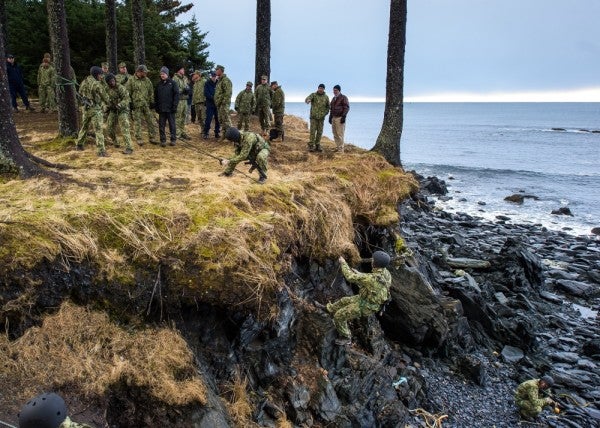 A Naval Special Warfare service member shot and killed an armed man who tried to enter a building at a Kodiak, Alaska military installation on Saturday, officials said.

Around 10:30 p.m. that night, a watch guard at the base observed the intruder, a 30-year-old civilian named Jayson Vinberg, tapping on the windows of a watch building with a knife, the Alaska State Troopers wrote in a dispatch on Sunday.

The base duty officer told Vinberg that he had to leave the base and then left the building to confirm that he was in fact leaving.

“Instead, the male started to walk toward the duty officer and the male brandished a knife,” the Alaska State Troopers wrote. “The male failed to obey the duty officer's repeated commands to stop walking towards him. The duty officer produced a handgun and shot the male.”

The duty officer's name won't be released until after consultation with the Alaska U.S. Attorney's Office and Naval Criminal Investigative Unit is complete, according to the Alaska State Troopers.

Naval Special Warfare created a training detachment in Kodiak in 1987 to train winter warfare students, according to a 2008 Navy press release.

The training includes cold-weather survival courses, winter navigation and adaptation to cold weather, the Alaska Journal of Commerce wrote in 2012.

“Classes have overnighted in snow caves on Pyramid Mountain, broken the ice on the Buskin River to swim and navigated small boats in the Long Island area,” the AJC wrote.