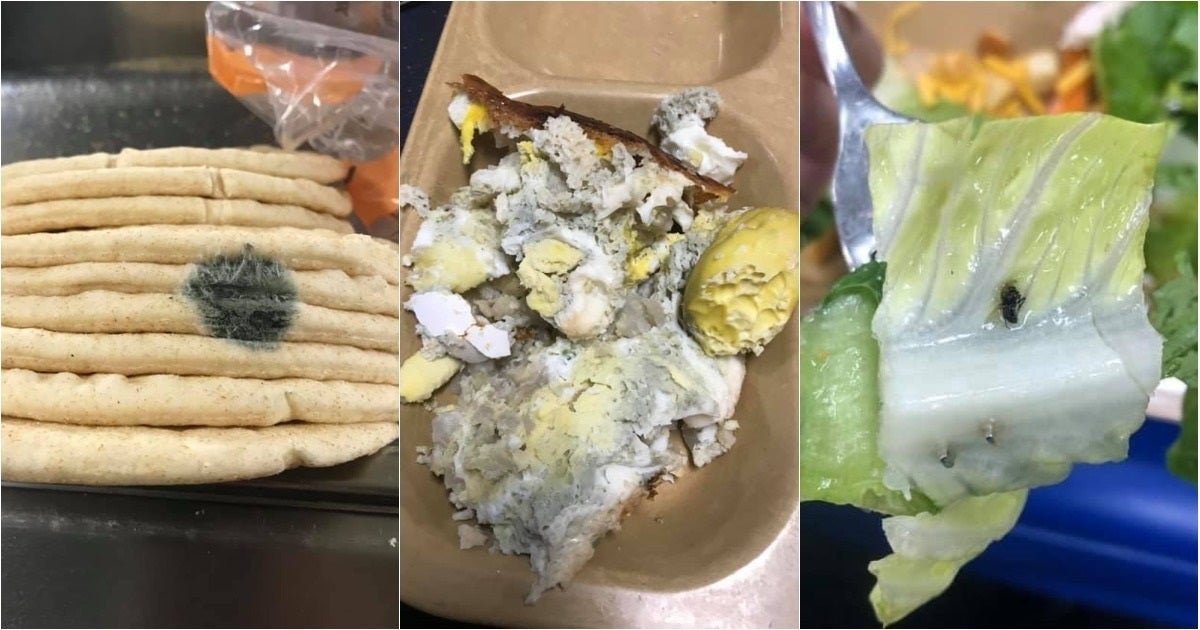 A Navy veteran has posted pictures and videos capturing the rotten, unhealthy, and quite frankly disgraceful food that sailors and Marines are forced to eat while embarked on the service’s warships.

The compilation of nauseating imagery, most of which were taken aboard multiple surface vessels, includes pictures of lettuce with insects, hair on food, and raw chicken, among other egregious examples.

“I want people to know about this – and I want somebody higher than me to know about this,” Selfaison, a former petty officer second class, told Task & Purpose. “On a ship, if I were to report this, the highest it’s going to go is to our captain. And there’s no way our captain is going to turn around and tell his superior: ‘Hey, the food on my ship is f—ed up;’ because they’re not going to rat on themselves like that.”

When asked about the imagery that Selfaison posted on social media, a Navy spokeswoman said the service takes all reports of poor food aboard ships very seriously.

“We cannot confirm the authenticity of the photos posted by the sailor,” said Lt. Emily Wilkin. “Nimitz was awarded the 2020 Captain Edward F. Ney Memorial Food Service Award for best aircraft carrier food service and our standards for cleanliness, service, and food quality are extremely high. The health and wellbeing of our crew is a top priority.”

Wilkin also said the Navy leaders often perform spot checks of food and the cleanliness of dining facilities, and sailors are encouraged to report issues with their food to their chain of command or provide anonymous feedback by using suggestion boxes.

According to Selfaison, however, sailors’ options for reporting rotten food are so limited that the Navy leaders who could actually fix the pervasive problems with the food served to sailors are not seeing what needs to be done.

Selfaison also said he waited until he left active duty on Oct. 3 to post the imagery of the gross food on Facebook so that the Navy could not retaliate against him.

“There’s no way it would still be on the internet now if I was still in the military,” Selfaison said. “I would have been forced to take it down.”

Not every meal Selfaison received during deployments was bad, he said. During holidays and Sundays, the chow was decent, showing it is possible for the Navy to prepare food correctly.

But overall, the quality of the food served while he was underway was consistently poor, he said.

Whatever standards are supposed to apply to Navy food are simply not being applied, said Selfaison, who noted that if aircraft maintainers did their jobs as poorly as the sailors in charge of preparing food for crew members, they would be held responsible for falling far short of quality assurance standards.

Since he posted the evidence of unhealthy food served by the Navy, Selfaison has heard from older veterans who have said that food in the military has always been poor, he said.

Selfaison has countered by asking them why the standards for food served to service members be that low.

“It all has to do with quality of life,” Selfaison said. “I feel like: When we’re out there, a lot of times all we have to look forward to is a meal – and when that meal is as messed up as some of these meals, it’s messed up. It kills morale.”

Sailors and Marines: Are you being served gross food? Please send pictures and videos of it to reporter Jeff Schogol at schogol@taskandpurpose.com or direct message @JeffSchogol on Twitter.