Earlier this month, the Army updated its notice for the Modular Handgun System that is slated to find a replacement... 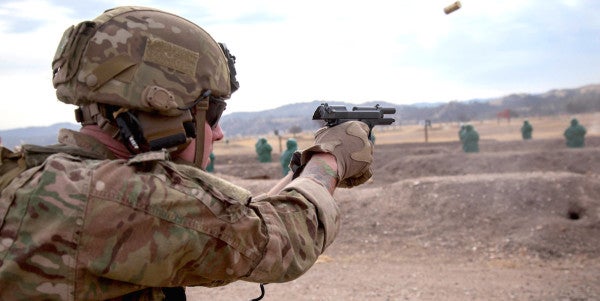 Earlier this month, the Army updated its notice for the Modular Handgun System that is slated to find a replacement for the M9 pistol currently in service. The official request for proposals now dubs the prototype weapon the XM17, and the full draft reveals some interesting specifications for the new pistol.

The first notable detail is that the XM17 program is actually asking for two potential pistols: a full-size service weapon and a more concealable compact version, likely for use with special operations units and military law enforcement agencies. Interested companies could also submit a single design they feel fits both requirements. They must also submit standard and extended magazines for each model.

Also notable is the lack of a defined caliber requirement, indicating that the Army is potentially considering switching away from the 9X19mm-pistol caliber used since the Beretta M9 was adopted in 1985.

But perhaps the most intriguing requirement is the ammunition support package each company is to provide with their entry. In addition to 60,000 rounds of standard “ball” ammunition and 50 inert dummy rounds, the draft asks for 1,600 rounds of what it calls “special purpose ammunition.” It’s possible this could simply be subsonic ammunition, as the draft requires the XM17 to be supplied with equipment to mount a suppressor. Given that frangible ammo is really only used for training, and that armor piercing and tracer rounds aren’t in use with military handguns, the other logical possibility is that the Army is considering adopting modern defensive pistol ammunition: hollow points. If so, that would be a major departure in the history of military service pistols.

With a potential contract for almost 500,000 pistols between the Army and the other services, competition for the XM17 will be fierce. While the final solicitation is not planned to be released until 2016, here are some of the likely contenders.

The Austrian gunmaker has been a powerful force in the handgun market since its first pistol, the Glock 17, came out in the mid 1980s. The company’s polymer-built pistols have proved extremely popular worldwide, finding service with numerous law enforcement agencies and national armies. In the United States, it dominates the law enforcement market, with over 60% of agencies nationwide carrying some sort of Glock pistol. While Glock did not participate in the program that would eventually lead to the M9’s adoption, Glock pistols have made inroads in the special operations community. There are numerous Glock models available in many calibers, in both full-size and compact variants, so the company will have little issue fulfilling that requirement.

One sticking point may be the Glock’s signature trigger safety; the XM17 draft asks for an “external” safety, but does not explicitly define what that means. Glock has added more traditional frame or slide-mounted safeties to its guns; it did so when entering into the British military’s search for a new handgun, but the United Kingdom’s Ministry of Defence ultimately waived that requirement.

This legendary German gun company has many handguns it could enter, but the most likely choice is its latest release, the VP9 pistol. Released last year, this 9mm polymer, striker-fired pistol is intended to compete with Glock’s product line. The VP9 also features replaceable grip backstraps for different hand sizes, a loaded chamber indicator, as well as full ambidextrous controls. There is no compact version of the pistol, so the company would place faith in the ability of the pistol to fulfill both roles. Recently, Heckler & Koch released a .40 caliber version of the pistol. The company has some experience providing pistols to the military; it supplied both the MK23 and HK45C .45 caliber pistols to U.S. Special Operations Command.

SIG Sauer, a German company, has a long history with service pistols. Its P226 design lost out to the Beretta 92 in 1985, but the P226 went on to be adopted by the Naval Special Warfare Command as the handgun of choice. SIG Sauer handguns also have a prominent presence among law enforcement. SIG’s latest effort is the P320, a polymer pistol released in late 2014 that is designed to emphasize modularity. Like the VP9, it features interchangeable backstraps. The grip frame is shared among all three available calibers: 9mm, .40, and .357 SIG. This allows separate slide and barrel assemblies to be purchased, enabling an easy change of caliber. In addition, the modular frames and slides allow a single gun to be converted into a compact version for low-profile use. The version SIG Sauer is entering into the program features a frame-mounted safety and a loaded chamber indicator.

This Massachusetts-based manufacturer has rebounded in the handgun market with its “Military & Police” line of semi-automatic pistols. The line is currently available in 9mm, .40, and .45 ACP, in both full-size and compact versions. The pistol was one of the first to feature interchangeable backstraps when it came out in 2005. Smith & Wesson offers a thumb safety, which will likely be on any version the company submits to the XM17 program. The pistol has caught on with a number of law enforcement agencies, as well as the civilian market. Smith & Wesson has little experience with military contracts other than providing pistols to Afghan security forces, but a partnership with General Dynamics, and the political power of “buying American,” may give the manufacturer an advantage.

This Belgian gun maker is not necessarily known for its pistols outside of the exotic Five-SeveN, or FNS, chambered in 5.7x28mm. But they have an extensive handgun line in more traditional calibers. The striker-fired FNS is FN Herstal’s latest offering, featuring 9mm and .40 caliber options in service and compact sizes. The FNS’s ambidextrous controls and manual safety round out the pistol’s features. While not widely popular among law enforcement or the civilian shooting community, the FNS may have a shot given FN Herstal’s experience with military contracts. The company’s manufacturing subsidiary holds the contract to build M16 rifles, M4 carbines, and M240 machine guns for the Department of Defense, and supplies several weapons to Special Operations Command.

Of course, there will certainly be other companies jockeying for the XM17 contract, as sequestration ensures that there will be few other small-arms opportunities on horizon. Growing companies like CZ-USA may take a shot at the lucrative opportunity. Beretta, who has held the pistol contract for three decades, will probably try to hang on to it with a recently announced polymer pistol; as the company’s attempt to sidestep the XM17 project with a upgraded M9 has seemingly fell through.

The role of the handgun in military service is differently from that in the military; the military treats the pistol as a backup weapon system rather than a primary one. As the armed services seek to improve handgun training, a more modern pistol, coupled with better training methodology, will better serve those in uniform who must rely on it.