Say Hello To This New Pistol With A Built-In Suppressor

With the U.S. firearms market flooded with near-identical 9x19mm, polymer-framed pistols, a unique selling point is increasingly key. As we've... 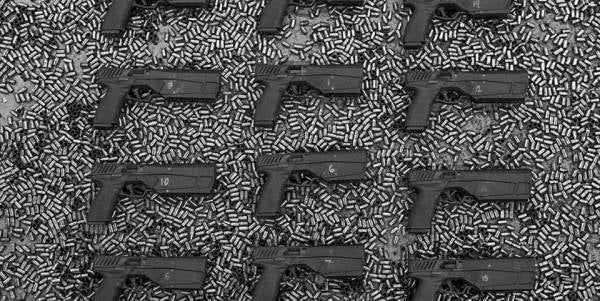 With the U.S. firearms market flooded with near-identical 9x19mm, polymer-framed pistols, a unique selling point is increasingly key. As we've seen with the new Hudson H9, manufacturers recognize that setting themselves apart is key to gaining market share. One of the best ways of breaking away from the pack is developing something no other manufacturer is offering. Utah-based SilencerCo, best known for its range of suppressors rather than actual firearms, has done this. At this year's SHOT show, the company is unveiling an impressive new weapon.

The first rumblings that an integrally suppressed pistol was coming to market appeared in 2015 when SilencerCo demonstrated the first prototype and released a humorous 80s-themed promo video. Early production models were seen at SHOT Show 2016, but at this year's show, SilencerCo is finally ready to launch the Maxim 9.

The Maxim 9 is an integrally suppressed 9x19mm pistol. Taking the technology used in SilencerCo's Salvo 12 shotgun suppressors, the Maxim 9 is modularly configurable in two lengths. At full length, with the removable expansion cell attached, the pistol's overall length is 10.75 inches. In this configuration, it is reputedly able to make all 9mm ammunition, including hot +P+ defensive loads, hearing safe. The slightly shorter configuration without the removable suppressor cell is just under an inch shorter, at 9.54 inches, and is hearing safe when using subsonic loads. The suppressor assembly at the front of the pistol uses a series of baffles and expansion chambers to allow the propellant gases to expand, decelerate, and cool. This reduces the velocity and noise made by gases as they leave the barrel. Suppressors, however, do not affect the crack made by supersonic ammunition downrange. Unlike many integrally suppressed firearms, the Maxim 9 does not have a ported barrel, where holes are drilled directly into the barrel; instead, it has an unported barrel that retains the projectile's normal velocity.

While the Maxim 9 appears bulky and muzzle heavy, when compared to a conventional pistol equipped with a suppressor, it is dramatically shorter. In its short configuration, the Maxim 9 is comparable to the overall length of a Glock 17L. The suppressor does add weight, with the Maxim 9 weighing 37 or 39 ounces unloaded, depending on configuration. The pistols balance is apparently surprisingly good with the weight of the action offsetting the weight of suppressor.

The pistol uses a proprietary delayed blowback action with a fixed barrel; it does not have a recoiling slide like conventional pistols. Instead, it has a breech block, which runs on two guide rods that connect to the barrel housing. Like most modern pistols, SilencerCo has moved away from manual safeties and opted for a trigger-blade safety. It also made the smart choice of having its pistol feed from readily available Glock magazines rather than a proprietary one. Interestingly, the Maxim 9 has a Keymod attachment point, commonly seen in rifles, rather than an integrated rail. It also has a red-dot mounting point cut into the suppressor assembly above the barrel. With the weapon's fixed barrel, this provides a stable mounting point that will retain zero.

SilencerCo has launched the Maxim 9 in line with its #FightThe Noise campaign calling for the lift of restrictions against civilian ownership of suppressors. The campaign has been part of the push to pass the Hearing Protection Act, which was recently reintroduced to Congress, by Republican Sen. Mike Crapo of Idaho. The legislation has garnered media attention due its support from Donald Trump Jr., who has publicly advocated for the deregulation of suppressors. “It’s about safety,” Trump Jr. said in a September video interview with the founder of SilencerCo. “It’s a health issue, frankly.”

The popularity of suppressors in the firearms community is certainly on the rise with more than 902,085 registered in 2016. Suppressors, however, are no new invention and in fact date back to the early 1900s. It is likely the name of SilencerCo's new pistol is a hat tip to the designer of some of the first suppressors, Hiram Percy Maxim Jr., son of the famous machine gun designer. At the beginning of the 20th century the Maxim Silencer Company developed a series of highly effective sound suppressors for both pistols and rifles. Maxim developed his suppressors out of a personal desire to be able to plink without disturbing his neighbors. His first was able to reduce a .22LR pistol’s report by up to 30 decibels. However, public interest in firearm suppressors was quashed in 1934 by the passing of the National Firearms Act, which required anyone purchasing a suppressor, machine gun or short-barrelled weapon to pay for a prohibitively expensive $200 tax stamp. This law was intended to help combat the gangland crime of the 1920s and 1930s; however, it remains in place today.

While American civilian use of suppressors was curtailed by the NFA, military use of suppressed weapons came into its own during World War II. The Allies fielded half a dozen successful clandestine designs with the British developing the Welrod, De Lisle carbine and suppressed STEN submachine gun.

While the idea of an integrally suppressed pistol may not be new, the Maxim 9 is certainly the first and seemingly the most innovative to be introduced to the civilian market.

SilencerCo has yet to release detail on exactly how quiet the Maxim 9's report is, but from shooting videos recently posted it certainly meets the claim to be “hearing safe.” SilencerCo says it has already begun distributing pistols to dealers and are aiming for the pistol to go on sale in April. With a manufacturer's suggested retail price of $1,499, plus an additional $200 tax stamp, the Maxim 9 is not a rival to the polymer pistol market, but its unique selling point and the increasing popularity of suppressors makes it an interesting prospect.

Check out Chris Cheng’s review below.