The most exciting advancement in the evolution of the otherwise boring-as-hell world of drones isn’t the MQ-9 Reaper, favored by... 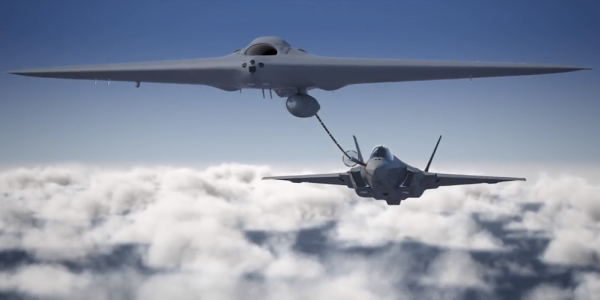 The most exciting advancement in the evolution of the otherwise boring-as-hell world of drones isn’t the MQ-9 Reaper, favored by the Pentagon to replace the iconic Predator: It’s the Navy’s MQ-25 program, an unmanned refueling aircraft that can extend the range of carrier-based fighters far beyond their normal capabilities.

While defense contractors Boeing and General Atomics are currently vying for the MQ-25 contract, Lockheed Martin just busted out a preview of a “Stingray” concept design dreamed up by the company’s legendary Skunk Works division. We recently made fun of the Air Force’s recent drone-fleet sizzle reel for its resemblance to a war movie that was so bad Jessica Biel couldn’t save it. But… Lockheed’s preview actually has us a little excited.

According to Popular Mechanics, the program will offer a major boost to the United States’ existing airpower capabilities. The Navy is on the hunt for an MQ-25 tanker that hauls up to 14,000 pounds of fuel to other aircraft up to 500 nautical miles from their home vessel… and that also plays nicely with that brand new electromagnetic catapult system on the next generation of aircraft carrier decks.

Things are currently heating up: On April 9, Lockheed announced that its proposal would rely on Navy-savvy industry partners who produced the F/A-18 Super Hornet’s engine and the F-35C’s landing gear. On the same day, Boeing released its own sizzle reel for a MQ-25 proposal:

Again: I find the absence of Jessica Biel appalling, and I won’t stand for it.