This Marine Lost His Hand In Iraq. His Son Made Him A Prosthetic So They Could Play Catch

Robbie Frei was 3 when his father, Jason Frei, was injured during the 2003 invasion of Iraq. A Marine artillery... 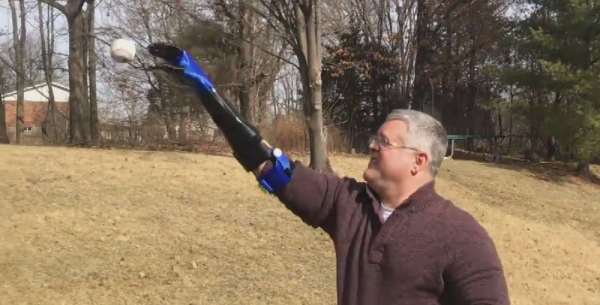 Robbie Frei was 3 when his father, Jason Frei, was injured during the 2003 invasion of Iraq. A Marine artillery officer, Jason was riding in a Humvee when the convoy was ambushed outside of Nasiriyah. He was struck with a rocket propelled grenade in the attack and lost his right hand.

Fifteen years later, his son made him a new hand so the two can play catch, ABC News reports.

A senior at Priory High School in Missouri and captain of the school’s robotics team, Robbie had already created a one-arm adapter for his father last fall, using a 3D printer through the school, so that the pair could play video games together, Fox News reported in February.

When it came time to pick his senior thesis project, Robbie, who’s been studying robotics since the seventh grade, set his sights on a new challenge: He wanted to give his dad a right hand that could throw a baseball.

Related: This Marine Lost His Leg In Iraq. Here’s How He’s Still Serving His Country More Than A Decade Later »

The new prosthetic is modeled after his father’s working hand. Using video of himself throwing a baseball, Robbie analyzed the motion through his computer to come up with the design and the required range of motion. Then he created a 3D printout with the help of the school’s engineering team.

Before Robbie’s gift, his father could “throw a baseball with my left hand — I learned to do that — but I wasn't able to do it with my prosthetic,” Jason told ABC news. “He did all of the math and all of the design to use it to play baseball… He really kind of crossed the bridge. It was a great project.”

As for what’s next, Robbie — who’s wrapping up his sixth year on the robotics team and eyeing college prospects — will continue working with his father to improve the prosthetic hand, with plans to add a thumb joint, and a rotating wrist.