Tactical competence is not the primary desired outcome of the Reserve Officers' Training Corps. However, tactics are used as a... 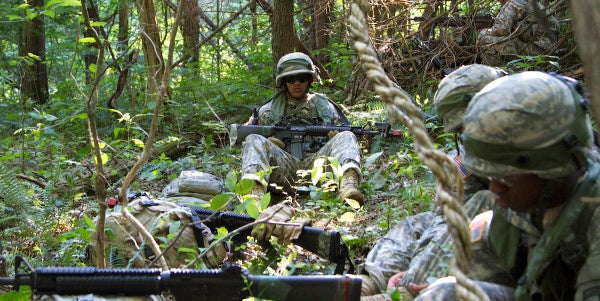 Tactical competence is not the primary desired outcome of the Reserve Officers' Training Corps. However, tactics are used as a vehicle to exercise critical thinking and problem solving, to develop adaptability and initiative, to practice teamwork and collaboration, and to build all of the other 21st century soldier competencies that do comprise our primary desired outcomes. Therefore, we must have a recognized baseline level of tactical competence before cadets reach the most important developmental milestone in their cadet careers, the Cadet Leadership Course — a 29-day course completed in the summer prior to a cadet’s final year of ROTC.

There are issues with training creative and innovative thinkers before they have a foundational understanding and demonstrated application of their most basic tasks. Maj. Gen. Peggy Combs, the commanding general of U.S. Army Cadet Command, has explained, in briefings to cadre emphasizing the importance of officers who can demonstrate flexible and adaptable thinking, that one cannot think outside the box if one does not know what is in the box; this is absolutely true. Unfortunately, Cadet Command has the daunting task of standardizing education across more than 270 host programs around the country, all staffed with cadre who have varying degrees of expertise themselves, as well as, sadly, varying degrees of motivation to enforce standards and truly train and inspire the leaders of tomorrow.

Not all programs seem to be teaching what is in the box. Having just completed 42 days at Fort Knox, Kentucky, as an observer/trainer/mentor during the Cadet Leadership Course — which replaced the Leader Development and Assessment Course this year — I have observed positive progress within the Army’s institutional education system based on its shift towards outcomes-based training and education. Outcomes-based training and education is a learner-centric education model that focuses more on what we want each individual student to take away from a block of instruction rather than what we want the instructor to communicate. It is heavily weighted toward experimentation and self-discovery.

Despite the fact that we are not doing anything vastly different than Socrates did almost 2,500 years ago, this education model is much more effective than the rigid “task, conditions, and standards” that has dominated our training methodology for so long. However, while I know the majority of cadets graduating from Cadet Leadership Course this summer will be better than when they entered, there are two major obstacles that are slowing the developmental process: a large variation in basic military competence among the cadets and the artificial nature of peer leadership over a 30-day period.

I observed, along with many of my peers, 40 cadets in my platoon this summer who, nearly universally, had an intense desire to serve, to understand what it means to be a leader, and to learn about their role in their future platoons. These qualities make them highly teachable with excellent potential. However, they also varied dramatically in their basic military knowledge, their ability to apply troop-leading procedures and the Army problem-solving process.

It was difficult for many cadets to demonstrate critical thinking because they didn’t have the competence or experience in very basic soldier skills and tasks to actually think ahead to see what effects their actions would have on an operation. They could not fully demonstrate their adaptability because they often could not recognize when an obstacle had just arisen that threatened the accomplishment of their mission. An inordinate amount of time was spent teaching, usually through the Socratic Method, the primary considerations of simple tactical decisions; like how it’s not a good idea to ambush from both sides of the road or why the security elements should usually be more than three meters away from the main body when crossing a linear danger area.

It is impossible to consider second- and third-order effects when the first order is not intuitively perceived. Adaptive thinkers, however, should be looking at second-, third-, and fourth-order effects and planning mitigations; innovative thinkers should be developing creative solutions that integrate multiple disciplines. Operations at the Cadet Leadership Course, which include more than 15 days “in the field,” focus on the platoon level when many do not have a full understanding of their responsibilities at the individual level, a weaker understanding of the fire team level, and most have barely practiced at the squad level. Thus, operations at the platoon level, rather than being fully developmental, are more confusing and frustrating than they need to be.

Beyond the issues with trying to develop critical thinking and adaptability without the knowledge to demonstrate it, the artificial nature of the Cadet Leadership Course creates leadership dilemmas rarely seen in the real world because all cadets attending the course are in about the same military-science level and all will rotate through leadership positions, typically spending about 24 hours in a role before rotating out and making room for someone else to get his or her “rep.” In the operational Army, I have replaced fire team leaders who, in moments of indecision, relinquished control of their teams to another member who recognized the problem, thought of a solution, and then violently executed it, filling the void in leadership. The Army wants leaders who have presence, meaning they are fit, confident and resilient; the Army wants leaders who actually lead, which means they communicate, they set the example, and most importantly, they do not shy away from the responsibility of leadership but seek it and the pressure it brings.

What I observed were some cadets who, to their credit, were respectful of their peers’ opportunities to practice their leadership, often caught in this awkward no man’s land between saying something or doing nothing when they recognized a better solution and potentially being seen as someone who isn’t a good team player either way. We have removed a gigantic piece of what it means to be an officer and a leader from this formative developmental experience: the drive to take charge of your unit, whether it’s a squad or a platoon, develop that team, and then take responsibility for its results, good or bad. A mentor of mine often says that leaders make everyone around them better; the implied message is that they do it through a continual process that revolves around assessing, building, and tracking. This is not only impossible to do with the extreme transient nature of leadership opportunities at the Cadet Leaders Course, it can also be interpreted as “poor teamwork” by a cadet who has the confidence and competence to suggest improvements to a peer’s plan.

Cadet Command has partially addressed each of these issues with the creation of Cadet Initial Entry Training, a shortened version of the Cadet Leadership Course focused on cadets in one of their first two summers in college. It is supposed to introduce them to some basic Army warrior tasks, such as rifle marksmanship and first aid, as well as build confidence through team-building activities like the Leader Reaction Course or the high ropes course. The Initial Entry Training cadets are even supervised by upperclass cadets who have either just completed or are about to enter the Cadet Leadership Course, giving them leadership opportunities with greater longevity and ownership. Initial Entry Training, however, is incomplete in its ability to standardize instruction across Cadet Command as it is not long enough, nor is the program of instruction robust enough to fully show all cadets who attend the training what is “in the box.”

An elegant solution without, admittedly, much fiscal consideration, but worthy of debate, would include basic training for every cadet between their freshman and sophomore year unless they are prior service. This would advance the mandatory contracting date for all non-prior service cadets by about 15 months, but would likely lead to more committed cadets. Concessions could be made to allow cadets to opt out of their contracts at any time up to the start of their junior years, much like the service academies already do, with no or reduced penalties. The desired outcome of basic training would be to provide the baseline foundation of discipline and competence, standardizing each to a reasonable level across the host schools and enabling follow-on summer training to spend more time developing deep thinking, rather than basic thinking.

Following basic training and the sophomore year, cadets would attend a course similar to the Cadet Leaders Course, but the desired outcome would be to build upon the individual warrior tasks and drills taught in basic and focus on executing fire team, squad, and platoon battle drills as members of a squad or as fire team leaders. Here, they would receive the experience of seeing the results of good and bad decisions, making them able to better assess and evaluate their own future plans, anticipate friction points, and mitigate them. These cadets would be led at the squad and platoon level by cadets between their junior and senior years, who had completed the same training the year before. The desired outcome of this summer training would be for these upperclass cadets to receive greater feedback when practicing developing subordinates, establishing a positive climate, building trust, etc. based on increased ownership and longevity in their leadership positions.

While it should come as no surprise that a combat arms officer seems overly preoccupied with training tactics, this focus stems from two sources, neither of which is “because it’s what I know.” First, despite the uncertainties expounded upon within the Army Operating Concept 2025, such as the location and nature of our future conflicts or the identity of our enemies, it also acknowledges that “Compelling sustainable outcomes in war requires land forces to defeat enemy organizations, establish security, and consolidate gains.”

At its core, the mission of the U.S. Army has always been and will always be to close with and destroy the enemy through fire, close combat, or counterattack. For the Army to defeat enemy organizations, it must be able to close with and destroy them; its ability to establish security to conduct stability operations is also predicated upon that mission; the nation’s ability to engage in diplomacy from a position of relative power depends on the Army’s ability to accomplish that singular mission. I cannot think of a better time than in an uncertain environment for every officer to understand the basic concept of how to most effectively close with and destroy the enemy. I would think that after 15 years of asymmetric warfare and all the stories of soldiers from non-combat branches who have had to fight through ambushes, help clear combat outposts, or reinforce positions on forward operating bases, this concept would be self-explanatory.

Secondly, we use tactics as a way of evaluating our problem-solving process, as a way of highlighting lapses in our critical thinking, as a way of training adaptability and testing innovation, and even as a way of introducing moral and ethical dilemmas requiring both creative thinking and a strong moral compass to solve. Tactics provide us opportunities to work within teams and solve problems within teams, to communicate plans, answer questions, and demonstrate confidence. If the human dimension is as important as our doctrine professes it to be, then we must find a way to make its development more efficient through better standards and more realistic training despite constraints.