What You Need To Know About TBI Treatment

While medical research into traumatic brain injuries is not new, our ability to identify and subsequently treat them, has leapt... 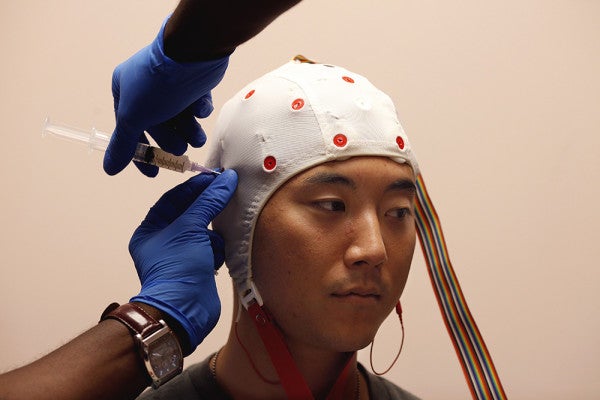 While medical research into traumatic brain injuries is not new, our ability to identify and subsequently treat them, has leapt forward in the last decade and a half, owed in large part to the wars in Iraq and Afghanistan.

To learn more about the treatment and recovery options for traumatic brain injuries, Task & Purpose spoke with Dr. Scott Livingston, the director of education at the Defense and Veterans Brain Injury Center.

Traumatic brain injuries are broken into three tiers — mild, moderate, and severe — and result from a concussive event, such as a motor vehicle collision, fall, rollover accident, or from being in the vicinity of a blast.

Related: What is a traumatic brain injury? »

Once a patient has been diagnosed with a TBI, they face different types of recovery and treatment options, depending on their injury and its level of severity.

“Most concussions, those symptoms will resolve spontaneously,” said Livingston. “They’ll need to be medically evaluated, but they won’t need medications or hospitalizations.”

According to Livingston, the most common treatment for a concussion is good old fashioned bedrest.

“The initial treatment for service members or anybody with a mild traumatic brain injury is rest,” said Livingston, who added physicians will typically recommend two different forms of rest: physical and cognitive.

To help treat the symptoms of a mild TBI — which include headaches, dizziness, nausea, fatigue, as well as memory and sleep problems — patients might be prescribed medication. Alternatively, patients can seek treatment for their symptoms through alternative therapies like acupuncture, yoga, and meditation, without taking medication, Livingston explained.

How long does it take to recover from a mild TBI?

“Most individuals with a concussion will recover spontaneously in a very short period of time,” he said.

According to Livingston, most medical literature puts the recovery time between 7 and 10 days, with about 83% of patients recovering.

However, Livingston explained that for a small number of patients the recovery may take up to three weeks. In an even smaller minority of patients, they may need several months to fully recover.

“Expect a complete, or nearly complete, recovery in a short period of time, days to weeks,” said Livingston. “For those who take longer to recover, treatments are available that their healthcare provider can recommend to enhance their recovery if their symptoms are persisting.”

When it comes to moderate to severe traumatic brain injuries, treatment is more varied and requires a greater level of care.

How do you treat mild to severe TBIs?

Compared to concussions, the recovery and treatment options for moderate to severe traumatic brain injuries are more medically focused and much more exhaustive, explained Livingston.

“If the injury is acute, or if it’s a recent injury those people are usually hospitalized,” Livingston said. “Many times, admitted to the intensive care unit to be monitored and stabilized for a period of time and then transferred to an inpatient rehabilitation facility where they’ll receive physical therapy, occupational therapy, speech therapy, and they’ll start the whole process of memory retraining along with that.”

In many cases, that’s just the beginning.

After the patient has made a certain level of progress, they’ll be transferred to an outpatient treatment facility, where they’ll continue a lot of the same therapies, said Livingston.

While recovery is certainly possible, the timeline depends on the extent of the injury and what part of the brain was affected.

The timeline to recover from a moderate to severe traumatic brain injury.

In the case of moderate to severe traumatic brain injuries, it just takes substantially longer, said Livingston, who added that it can take months or even years.

“That’s the one that’s very difficult to predict, because it’s so variable among individuals,” said Livingston.

Recovering from a moderate to severe TBI depends on a wide range of factors: the patient’s age, severity of the injury, the part of the brain affected, and other injuries sustained when they suffered the traumatic brain injury.

While a full recovery may seem daunting, Livingston encourages patience.

“Be persistent, be patient, and stay actively involved in the treatment,” he said. “Treatments for moderate to severe TBIs are advancing everyday, but it’s a long road to recovery.”