Every service member shares two experiences over the course of their military career: the transition from civilian life into the... 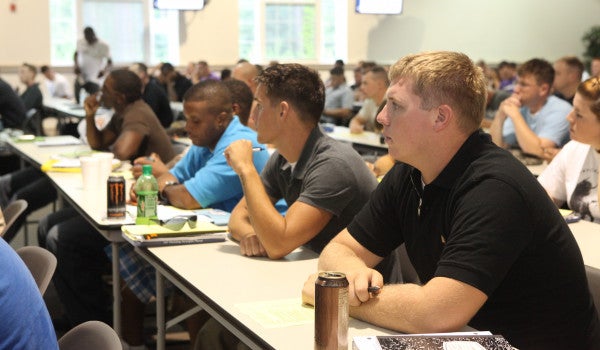 The armed forces’ formal transition program has been called by a number of names over the years, but it is best known by its previous name, Transition Assistance Program. Whatever the name, transition programs in their current iteration fail the people they are designed to help.

The main contributors to transition seminars are the Departments of Defense and Veterans Affairs. Problems arise here as the different agencies are assigned responsibility for different aspects of the transition program. For example, the Defense Department is the lead agency on the two-day “Accessing Higher Education” option even though VA administers the benefits program once the service member takes their uniform off. The “Accessing Higher Education” module is supposed to familiarize service members with the college admissions process and help them with school and degree program selection. Though the Department of Defense received some assistance from the Department of Education in building the curriculum, the agency with only a tenable connection to higher education is entrusted to guide the 40% of transitioning service members that elect to take this option.

As a Marine who experienced transition training firsthand in 2012, I can say that this fails to satisfy the needs of service members who plan to pursue higher education after the military. While attention is paid to aspects of the G.I. Bill and vocational rehabilitation, virtually no attention is given to what the college admission process is like or how to best prepare for school. Also, alternatives to traditional college, such as vocational training, are only addressed if a service member chooses to attend the “Career Technical Training” track instead of “Accessing Higher Education.” These two curricula, developed independently of each other, would serve as complements. In my conversations with veterans who have transitioned more recently than myself, I have regularly heard complaints that transition assistance sessions continue to offer little practical guidance beyond outlining VA education benefits.

To truly make higher education accessible to veterans, the military should mandate that service members who wish to attend college be identified a year before leaving active duty, and be permitted to attend a college admissions workshop. Such a workshop would provide veterans with information on what to expect of the admissions process. It would cover things like admissions deadlines, necessary tests, and the financial aid process. This workshop would be run by individuals with experience in the admissions process either as administrators or consultants. This workshop would only need to last one to two days, but further individual counseling could be offered to address individual needs.

This past March, I had the opportunity to serve as a student legislative fellow at the National Legislative Conference host by the Veterans of Foreign Wars. I met with senators, representatives, and officials from the VA and Department of Labor in Washington, D.C. In my experience, political and agency officials were not fully aware of the actual conduct of transitions programs and the perceptions of service members regarding the value of the training they were receiving.

My interactions with recently transitioned service members challenge this. I do not fault the VA and Labor officials for their misperceptions about the quality of the military’s transition assistance programs, but I do hold their agencies accountable. The lawmakers I discussed this with were generally sympathetic to the issue. Many were surprised by the criticism, having been only peripherally familiar with the issue.

Sympathy and concern are not enough. Action is required to pressure the relevant agencies into improving the transition experience.

Military-to-civilian transition is a serious issue for our future veterans. We must work to see that the process improves and that they are given the best opportunities to succeed in their post-military lives. As Marines, we were frequently told, “Complacency kills.” Those two words were why we never gave up until a task was accomplished. The military must remember that motto as it fulfills its obligations to those troops in the final period of their time in uniform.