More Than 250K Veterans Work In The Food Industry. Here’s Why

Editor’s Note: This article was reported by Sarah Sicard for Hirepurpose. Food may be a critical part of war, but... 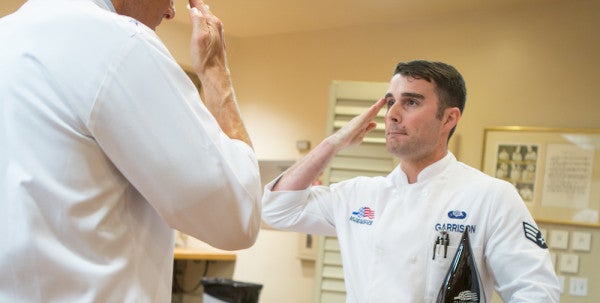 Editor’s Note: This article was reported by Sarah Sicard for Hirepurpose.

Food may be a critical part of war, but those involved in making sure that quality meals are served to every soldier, sailor, Marine, and airman around the world are all but forgotten. They shouldn’t be, and not just because they quite literally fuel the military: many of them go on to have illustrious careers in the civilian food-service industry.

More than 250,000 veterans work in the food sector, and with good reason. The potential for moving up within the food-service industry is growing. Since 2006, wages for jobs in the field have gone up 11%, according to Payscale.com. With just a high-school degree and base-level training, you could make anywhere from $30,000 to $60,000, depending on where you live and what food-service role you take.

What’s more, the restaurant industry is projected to add 1.6 million jobs by 2027, according to the National Restaurant Association lobby arm. And hundreds of food businesses across the country are run by veterans, from diners to bars to top level restaurants in major cities like New York, Houston, and Chicago.

“There’s something to being of service,” Rob Gifford, Executive Vice President of the National Restaurant Association Educational Foundation, told Hirepurpose at its Armed Forces Forum for Culinary Excellence on Aug. 4. “The culinary field is very much of service to the nation. So many of the things that happen in the military… those are all the skillsets that help people thrive in the restaurant industry.”

The culinary industry is more than just chefs, waiters, and waitresses. There’s a whole array of diverse opportunities in food service, from cooking to logistics to management and finance, a perfect destination for veterans who honed their skills early in their military career.

For service members transitioning out of the military, food-service training can be an excellent educational alternative to regular college. Currently, 24 culinary schools across the country are covered under the GI Bill.

But even if school doesn’t appeal to you, there are plenty of jobs available to veterans with just a high-school degree.

“Culinary is a great industry to be in,” NRAEF Chairman Greg Hamer told Hirepurpose. “There is no other industry that you can get promoted in as quickly as culinary.”

As a result, each year, the Culinary Institute of America at Greystone and NRAEF bring in dozens of service members across all branches to spend a week learning from world-class chefs in hopes that, when they separate or retire, they’ll go on to staff restaurants across the country.

According to Hamer, what makes military food service professionals such valuable civilian chefs, managers, and hospitality workers is that they don’t cut corners. Their dedication to procedure and professionalism is unparalleled.

“The biggest thing is the discipline,” Hamer added.

This year, 47 service members who show promise in the field were selected to participate. For some of the service members, the classes build on previous cooking foundation, but for others, it’s an entirely new experience. Many of them only have experience cooking chow hall food for thousands on base or in the barracks where they are stationed.

“I didn’t have too much experience with the culinary aspect — the methods,” Army Spc. Eric Gonzalez told Hirepurpose. “[This is] a step up.”

The students were flown in from across the world and spent four days learning all the nuances of cooking from master chefs. NRAEF was kind enough to fly out Hirepurpose to observe the courses and speak with the leadership. In attending, we learned that many of the service members will bring their experiences at CIA Greystone back to their respective units, and later on, to the civilian restaurant world.

“They’re young people — 19 and 20 years old — and the discipline they have, you just can’t get that in the civilian world,” Hamer added. “If we had two candidates apply, one of them a civilian and the other one military, we’d go with the one coming out of the military.”

See all culinary jobs with Hirepurpose »