This Is What Happens To Your Dreams After You Take Mefloquine

Anyone who’s ever taken the antimalarial drug Mefloquine will tell you about the dreams. I was back in Haditha, Iraq,... 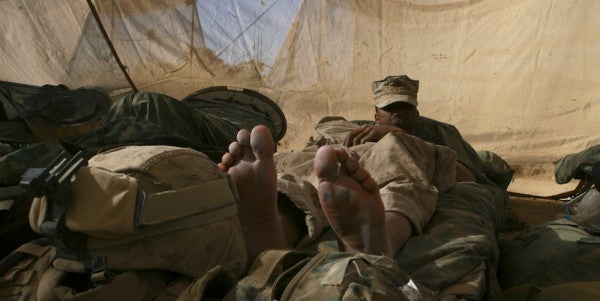 Anyone who’s ever taken the antimalarial drug Mefloquine will tell you about the dreams.

I was back in Haditha, Iraq, where Wimberg was killed. I was in the alleyway between the two buildings re-investigating everything about his death 10 years later as a photojournalist. Then I was being shot at.

I ducked into the stairwell beneath the shooter’s window, bounded up the stairs, and kicked in a door. Inside was a family. Someone had a gun pointed at me. I fired purely on instinct. The mother screamed.

It was a baby, a baby working a fully automatic weapon. Now the baby didn't have a head.

A little girl turned toward me, holding a rifle. She sighted in. I waited three whole seconds, begging her to drop the weapon and reading in her eyes that she would not. I shot her. Then there was a third child. This one was a boy of 12, maybe. He had a revolver. I put two rounds in his chest, center mass, and he dropped the the gun.

He replied in English, “You killed my family.”

“I didn't have a choice,” I said. He conceded this to me. Yes, they did both have guns. Nobody tried to argue that the baby was innocent. The baby was just another combatant.

The mother seemed to be calming down. The oldest child, the boy bleeding from the chest, seemed to be doing okay. He wasn't moving his body at all, but the look on his face said he was going to live and that despite the two high-velocity rifle rounds to the center of his chest he’s gonna be fine.

A cell phone rang in their home. Cell phones are contraband. I pulled it from a drawer and answered. It was Figueroa and Delvalle calling, Marines from my old platoon. They came up the stairs and inspected my work. Figueroa complimented my shot grouping and the boy with two bullets in his chest gave a thumbs up, confirming that they were indeed excellent shots. The baby's head was taken clean off and the little girl was dropped dead in an instant.

As soon as they left, the father arrived. He didn't cry. He looked around at the carnage that used to be his family and accepted this as just another bad day, and me as an unwanted guest that was staying for dinner.

That's when I woke up.

These are the Mefloquine dreams. They were supposed to be temporary, but they’re not. They come every night. Some of them good, some of them bad, but none of them are the fleeting dreams like you had before. These dreams aren’t real. I never even made it to Haditha; yet, they form as memories, and you carry them with you forever.