Editor’s Note: The following story highlights a veteran at Fiserv. Committed to including talented members of the military community in... 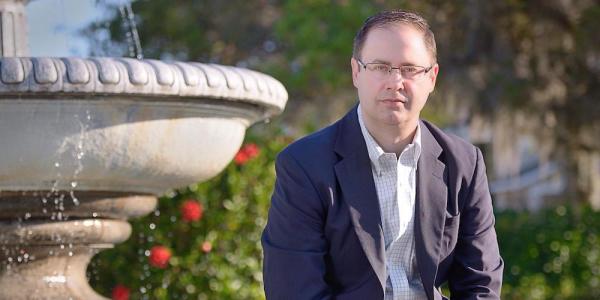 Editor’s Note: The following story highlights a veteran at Fiserv. Committed to including talented members of the military community in its workplace, Fiserv is a client of Hirepurpose, a Task & Purpose sister company. Learn more here.

From attending West Point to serving as a U.S. Army Infantry Officer to taking on the role senior vice president at Fiserv, a Fortune 500 financial technology company, Adam Appleby looked to the service of others to pave his own road to success in both the military and corporate worlds. Now, he’s on a mission to help veterans following in his footsteps.

“I grew up in rural Missouri in a seventh generation military family,” Appleby, Fiserv’s Senior Vice President of Operations and Technology for Output Solutions, said. “My dad was on active duty when I was born, and both my grandfathers served in WWII.”

Like his paternal role models, he had his heart set on serving in the military from a young age, pursuing ROTC scholarships until he landed at West Point where he spent four years learning “to be a soldier, follower and ultimately a leader,” he says. When he graduated from the military academy in 1995, he was assigned to the 101st Airborne Division at Fort Campbell, where he hit the ground running.

“Three weeks after I got there, we deployed to Panama,” he recalled. “We spent the first four-and-a-half to five months doing canal zone pacification.”

Over the next few years, Appleby gained valuable experience leading soldiers in various roles — until his military career took an unexpected turn. Into his fourth year on active duty, he suffered an injury to his shoulder that would prevent him from fulfilling his dream as a third-generation paratrooper.

But instead of allowing the incident to derail his dreams, Appleby shifted his perspective and forged new plans. He learned his education and experience were marketable and researched how to transition out of the military. And just like his time at West Point, Appleby considered what others had done right before him.

“There was a registry that listed West Point graduates and where they were in corporate America. I found a graduate who worked at Sikorsky and asked him to review my resume. He ended up reaching out to the head of HR, who basically said, ‘You wrote this resume like you don’t want to leave the Army. You’ve used phrases that only you would understand. You’ve got to get rid of the jargon. Don’t say platoon. Say operating team of 32 people. You have to write your resume as if you’re already in corporate America.’”

Following the advice of his fellow West Point graduate, Appleby looked back on his military career and worked to translate military lingo into common language.

“I didn’t think anything I’d done was transferrable. Looking back, so much was transferrable,” Appleby shares. “You think about what infantry soldiers do every day. They ask, lead and motivate individuals to do things that are very hard to do, and they do it without the benefit of being able to promote at will, pay more, or recognize the way corporate America can. Knowing how to influence people to do things that are tough without the benefit of saying, ‘Hey, I’ll give you more money,’ that is really transferable.”

After separating from the Army, Appleby landed a job in financial services at the company he’d targeted during his job search due to their strong support of former service members: General Electric. From there, Appleby’s military background helped him excel quickly in the financial services industry, resulting in success and personal growth at industry-leading companies over the next 14 years, including Bank of America and Ally Financial.

Then, in 2014, former colleagues reached out to him with a new opportunity at Fiserv, a financial services technology provider that has been named one of Fortune World's Most Admired Companies® in recent years. He was immediately drawn to the company’s culture and the idea of joining a familiar team.

“I was going to be working with people I knew and trusted, my Bank of America and Ally colleagues. That was attractive. Who you work with is as important as what you do,” Appleby explains.

He goes on to say, “Fiserv is client-orientated, and we have a culture of accountability. I like that. Sometimes it’s tough to be accountable for your actions, but it’s what makes you a better company.”

Now, Appleby oversees 1,300 people, 1 million square feet of real estate and a department that produces over one billion envelopes per year as the Senior Vice President of Operations & Technology for Output Solutions. He is also using his executive influence to open more doors to veterans at the company and retain employees with prior military service.

In fact, Appleby is currently in the process of working with a colleague to launch the Military Service Fiserv Affinity Network, a “by the people, for the people” group to foster networking, growth, and support within the company’s veteran population.

“Our mission statement is to recognize, connect and utilize the collective value and experience of Fiserv’s current and former military service members,” Appleby shares. “We want to promote the hiring of qualified individuals, and act as coaches and mentors to foster better personal and professional achievement for veterans.”

“We want their careers to prosper here at Fiserv,” he added. “We plan to do monthly or quarterly virtual meetings over the phone and host an on-site event once a year.”

Appleby encourages employment-seeking veterans to do what worked for him: reach out to those that have already walked the road you’re wanting to take and learn as much as you can from them.

“Be vulnerable, and look for mentorship. Find someone to help translate for you,” he said. “Go to people you trust and ask for help … Someday, you could be the one encouraging fellow veterans to succeed.”

Fiserv is a trusted name in financial services technology and has been for more than 30 years. We’re leading the digital transformation of financial services by creating adaptive solutions that enable today's consumer to move and manage money with ease, speed, and convenience. As a Fortune 500 company, we deliver superior value for our clients through leading technology and targeted innovation. We enable our clients the ability to deliver intelligent experiences to their customers to efficiently move money and information in a way that moves the world. We’re the partner clients count on.

We offer many opportunities for growth and development throughout your career. We’re looking for the best and the brightest to join our global team of professionals. If you’re seeking an environment where leadership, innovation and collaboration are valued, you’re in the right place. Explore the possibilities. Find your forward with us at www.Careers.Fiserv.com