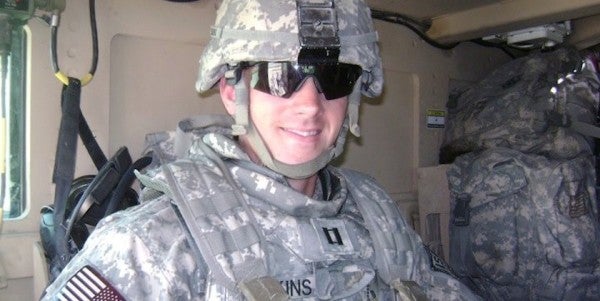 “My first day of ROTC at the University of New Hampshire was Sept. 11, 2001,” Sean Wilkins said. “I was scared. I had no idea what was going to happen.” Wilkins, who served in the U.S. Army for eight years, learned several valuable lessons about himself in that time, and about his passion for helping others.

His hope to join the military started at a young age, as it does for so many. Wilkins and his brother played army as kids, and his interest continued well into high school. He was close to enlisting in the Marine Corps when his mother talked him into going to college, something he hadn’t considered before. After applying to three schools, Wilkins decided on the University of New Hampshire, since they offered him a scholarship.

Wilkins commissioned as a chemical officer upon graduation and then moved into human resources, where he thoroughly enjoyed taking care of soldiers so they could focus on the mission. When it came time to transition, like so many others, he didn’t want his next career to be anything like his last one. Initially, he avoided HR, but eventually, his desire to help people drew him back.

“I started as a human resources generalist, but found my passion within the talent acquisition field,” he said. “Then I led recruiting at some mortgage companies before I got connected with Penske.”

The right person for the job

Wilkins heard about a new role at Penske through his network, which led him to become the first military recruiting manager at the transportation company.

“When Penske was looking to fill this position, I was immediately attracted to it for two reasons,” he said. “One was that it was in Texas, and the location was appealing. The other was the way this position was the perfect intersection of everything I was passionate about, recruiting and veterans.” Wilkins believes that every veteran has a responsibility to reach back from their successful position and help other veterans.

Penske had an informal process for hiring and retaining veterans before creating this position, but now with a designated person to lead the way, there will be more programs, opportunities, and relationships. Building on previously established partnerships with organizations, Wilkins and his team are also working to connect with local installations and their transition services.

“We have veterans on the recruiting team and several retired officers in key operations positions,” he said. “We are able to connect veterans who already work here to those who are new hires, and provide them with a system of support through this part of their transition.”

A company that fits you, as a person

No one understands the difficulty of transition better than a veteran. That made this position the perfect fit for Wilkins.

“When I left the military, I thought it would be easier than it was,” he said. He was a little behind the curve when it came to interviewing, resume-building, networking, and even selling himself as a person. And, he admitted, he took for granted what he thought his worth was in the civilian world. “As a senior captain, with two deployments, who managed a staff of up to 35 people, I felt like I had a lot to offer,” Wilkins said.

But it wasn’t as easy as he had thought it would be.

“The loss of identity was hard,” he said. “The change from being around soldiers 24/7 to having to figure out who I was now, that was a huge challenge.”

But having a support system was what got him through. It took him time to reflect and figure out who he was and who he wanted to be. He now takes that experience and shares it with other veterans looking to start a career with Penske Logistics and Penske Truck Leasing, helping them know they aren’t alone in the process.

“Penske is a great place to transition to after the military,” Wilkins said. “We are a values-based organization, just like the military. Penske is a company that is truly dedicated to employing veterans.”

“From the support and training offered to the career growth that is available, but most of all it’s just a great place to work, a perfect fit for veterans looking to further their career and work with some great people while doing so.”