How To Maintain Your Long-Distance Relationship On Deployment

For deployed troops in a long-distance relationship, maintaining contact with one’s partner can be a struggle. No, that’s putting it... 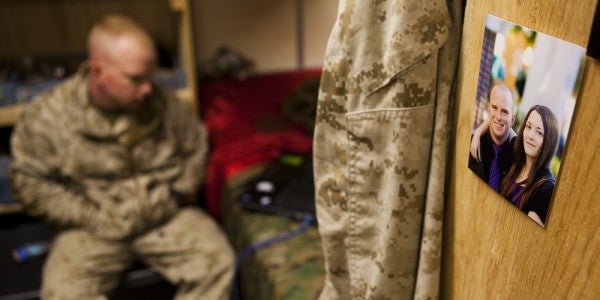 For deployed troops in a long-distance relationship, maintaining contact with one’s partner can be a struggle. No, that’s putting it too lightly. It can be an incredible challenge, made worse by inconsistent internet or phone connections, unpredictable schedules, and of course, the everyday rigors and dangers of deployed life.

But, it’s not impossible. It just takes some hard work, planning, and the occasional dirty letter to keep things interesting.

To find the best way for troops and their loved to stay in touch during a deployment, Task & Purpose spoke with Rhonda Milrad, the founder of Relationup, an app that provides coaching and relationship advice.

How you communicate with your loved one can has as much of an impact as what you choose to say, explains Milrad, who has a master’s degree in social work and 20 years experience as a psychotherapist.

Related: 3 things to know about long-distance relationships in the military »

As hard as it is to do this while deployed, it’s important to try to maintain consistent contact with your partner back home. Milrad said establishing and maintaining that routine is critical.

“The more that you have prescribed time that you do that, the better,” explains Milrad. “If you know that Tuesday nights will always be good, you kind of have a date night set up with your loved one, where it’s a given that on Tuesday nights or Thursday nights that you’re gonna Skype each other or Facetime each other, or Google Hangout or whatever you're doing. Some kind of routine is very nice.”

When it comes to staying in touch, Milrad says video streaming is the most preferred method, with emails at the bottom of the list, and hand-written letters as a way to maintain a more intimate connection.

This can be Skype, Google Hangouts, Facetime or really any other video streaming service. The key is having face to face contact with your partner, explains Milrad.

“The more contact you can have with someone where you’re engaged fully with them, the better,” says Milrad. “So obviously, technology that allows face to face is the best”

A call, on the phone or just with a voice chat service

“Even the voice doesn’t have to be over the phone,” explains Milrad, who adds that talking to your partner allows for a more personal and fluid form of contact. It’s hard to read between the lines when you’re hurriedly texting back and forth on the computer. Was that last message tinged with sarcasm or was it sincere? It’s hard to tell someone’s tone without, well, tone.

“Anything that allows a voice would be the second preference because you can have a continuous conversation,” Milrad says.

If you have an internet connection, but it’s not consistent enough for a live feed, or the line for the phones snakes out the door and around the building, then opt to chat with your partner online instead of sending an email, says Milrad.

“It’s kind of spontaneous and you really feel like you’re having a conversation in the moment, whereas email is more removed,” Milrad explains.

Email should be your least preferred form of contact

The reason? It’s too detached.

Unlike a conversation over the phone or video, an email can feel static and distant, though that’s not to say you shouldn’t email your partner just because it’s not the best, but if you have a choice, call or message them and save the emails for more mundane communication. Like giving your landlord shit for not fixing the plumbing while you’ve been gone.

While continuous, or let’s be honest, semi-continuous communication is important it’s not always possible.

Which is why the military issued you that note taking gear

Unlike emails, letters are far more personal, and can help provide a level of intimacy that may be lacking from your relationship while you're away.

Letters are more sentimental than a bland black and white email, explains Rhonda.

“To me writing is so intimate, even though it’s so far removed.”

“It's not exactly the medium I would want to send to keep you up to date because I’m probably going to be texting with you or emailing with you ten times before you get the letter, but what might be nice with the letter is to share something very private” says Milrad.

Hand-written letters are also a way to maintain physical and emotional intimacy.

“Whether it’s a poem, or something sexy about missing the person, or a sexy dream you had about them, that can be kind of romantic. Something more personal would be lovely in writing and be very special and intimate.”

You can also read a steamy letter in private, which is a lot better than pulling up a bunch of dirty photos on a public computer in a crowded room, which is awkward. Don’t be that person. Nobody likes that person, and chances are that person’s partner wouldn’t approve either.