I Spent A Month Looking For Love On Military Dating Sites

Everyone knows: Being single sucks sometimes. You know what’s worse than being single, though? Trying to find a relationship using... 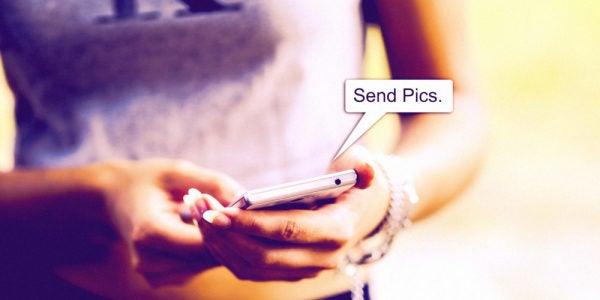 Everyone knows: Being single sucks sometimes. You know what’s worse than being single, though? Trying to find a relationship using dating sites. But if that wasn’t enough, there are also military dating sites. So I decided to try three of them for a month. Needless to say, I didn’t find love … just some lonely men who seem to have, as one guy put it, “been used, abused, and cheated on.”

In 2015, while I was single and living in Washington, D.C., I tried a few popular dating apps like Tinder, OkCupid, and Bumble. But I deleted them after about a week, because I could never bring myself to actually go on dates with anyone who swiped right. So I’m a total novice when it comes to dating online, really dating at all.

Recently though, I started to think about how hard relationships can be for service members and veterans. So naturally, I took to Google to see if there was an online service for military dating. While I found no mobile apps, there were three promising websites: MilitaryCupid.com, MilitarySingles.com, and UniformDating.com.

I registered for all three, and here is what I found.

After a few weeks of messaging locals and attempting to solicit dates in the Greater New York City area, I didn’t have much luck. In retrospect, the popularity of mobile apps most likely draws the use of eligible military bachelors, because unlike these sites, the interface is more friendly and the likelihood of meeting someone is much higher.

It’s also worth noting that on all three sites, there was really no way to create a geographical limit. A couple days into my quest for love, I was getting messages from some people who lived five miles away, and others who lived in Germany and Japan.

Those men who did reach out were often willing to share some fairly intimate personal details. In talking to them, I learned that a majority of the guys using the sites are in their late 30s, have a few kids, and are looking for a wife to settle down with. The exceptions are barely in their 20s and typically looking to interact on a free mobile messenger app called “Kik,” which allows users to chat without giving away their phone numbers, you know … so you can exchange things like pictures.

Overall, my experiences with the sites were varied, with one emerging as a clear winner. I attempted to reach out to the sites as well to see if they could offer insight into success stories or the number of users, but their representatives said they couldn’t disclose any data about their users.

Militarysingles.com wanted me to pay to see messages. Since I find the notion of paying for online dates a little too similar to paying for sex, I gave up on the site. In addition, it wouldn’t let me set my preference to men, so despite being straight, I kept getting notifications about women I might be interested in as well.

UniformDating.com, though free, was too complicated to use. I couldn’t tell the difference between live chats, messages, winks, likes, and whatever else was going on. The interface was so confusing that I couldn’t figure out if the messages were to me, or ones I had sent. After a week on this site with seemingly no coherent mail, I quit it too.

As a result, most of my interactions came from MilitaryCupid.com. The site looks like it was designed on Microsoft Word in 1997, but it’s simple to use, and it’s free. The registration process was thorough: Asking my preferences from eye color all the way to income. It even wanted to verify my photo by using my driver’s license.

Regardless of age though, none of them ever responded to my attempts to meet in person. We would have conversations about hobbies, school, the weather, and weekend plans, but no one wanted to exchange phone numbers, or set up a place to meet. Typically, if I asked for either a number or a real date, I was met with radio silence and never heard from the guy again.

Still, I held out hope, and then I tried my luck in Norfolk, Virginia, while visiting my parents over Labor Day weekend. Being the site of the world’s largest Navy base, I thought sheer numbers might result in an actual encounter.

My plan was foiled, however, when Hurricane Hermine struck the coast and left me stuck at home with my family, where we all got drunk and played a full game of Monopoly. I lost epically, in case you were wondering.

When I returned to New York, I realized that I wasn’t going to get anyone to meet up face-to-face on any of these sites. So instead, I began questioning all the people I was messaging about why they had turned to online dating. All in all, I probably spoke to about 25 different people.

Related: 8 True Stories About Dating In The Military »

What struck me most was that almost all of the men that really opened up to me had their hearts broken by their girlfriends, fiancees, and wives while they were deployed.

I realized how lonely they must be, and that this attempt to connect with people online was somewhat of a last resort for a lot of them … minus the guys that were just looking for nude photos, of course.

What’s most disappointing, though, is that the sites proved really terrible places for making intimate connections.

After a month of mostly trivial conversations about the weather, what it’s like to live in New York, and if I would consider getting a Kik account, I can now say 100% that military dating sites suck. You’re better off trying your luck at a local bar, or just quitting the game altogether and signing up for Seamless and Netflix, because what’s better than ordering takeout and binge-watching “Stranger Things”?