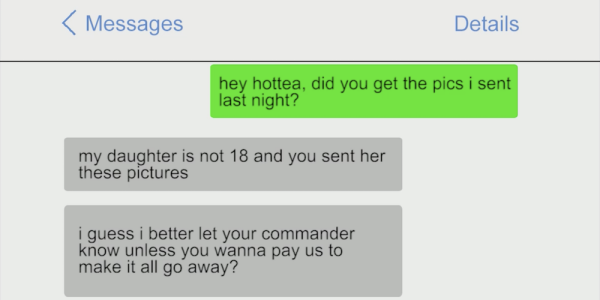 According to an Army Criminal Investigation Command warrant submitted to a federal court on Oct. 3, a Department of Defense joint task force found that, starting in 2015, prisoners in the South Carolina Department of Corrections would pose as women “around the same age” as their targets, usually on the dating website PlentyOfFish, in order to lure military service members into sexually-charged text conversations.

After inducing their digital suitors into exchanging sexually explicit images, the prisoners would then “send a text message to the victim posing as the female's father … the victim that the female is under the age of 18.”

With targets sufficiently freaked out, the inmates would use the threat of law enforcement intervention to extract money from service members, so that victims agree to pay for various services.

While prisoners in the U.S. generally receive limited access to the internet during their incarcerations, a South Carolina Fox Affiliate reported back in 2016 that inmates in the SCDC system have previously used PlentyOfFish to form legitimate romantic relationships.

Army CID declined to comment on Operation Surprise Party, and as the Daily Beast reports, the Army has not announced any charges in the sextortion ring yet.

But as recently as this past April, CID had cautioned soldiers to be on guard for “sextortion scams” where criminals “use any dishonest method to make contact with potential victims and then attempt to blackmail them.”

“To avoid falling prey to a sextortionists never send compromising photos or videos of yourself to anyone, whether you know them or think you know them,” Special Agent Daniel Andrews, head of CID's Computer Crime Investigative Unit, said in an Army release.

“If you meet a person on a legitimate online dating site there is very little chance that you are actually communicating with an underage person,” Andrews said in the statement. “It is therefore very unlikely that you sent or received child pornography or provided your images/videos to a minor.”