Editor’s Note: This article originally appeared at Cellar Door, the personal blog of Gabrielle Puglia. There have been a few... 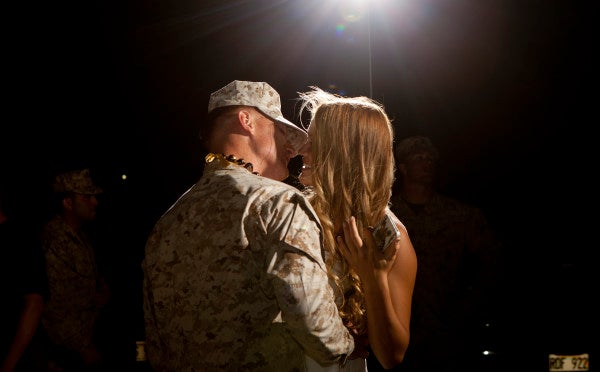 There have been a few articles about the pros and cons of dating the Generation Y military man, and while some of them are better reads than others, I felt the need to weigh in. This is based solely on the experiences of my veteran friends, as well as my own with a past paramour. This list is not simply a composition of pros or cons, but rather an overview of what dating a service member — active duty or veteran — is like.

1. Slowly break the barrier. The military teaches service members to trust their unit, and few others. They are meant to be extremely close with this group of people and everyone else is simply on a need-to-know basis. As the significant other, you will not get more details than necessary on anything unless you poke and prod. It is a lot of work to break down those barriers and gain enough trust for him open up and be vulnerable. But, trust me, it is worth the effort.

2. Be patient. Do not expect this vulnerability to come quickly. If he comes to you with a problem, chances are he'll talk about it until he no longer wants to and then go into lockdown. Be patient, but keep digging at those walls.

3. Respect the band of brothers. You need to understand that the military is a brotherhood. Military men may never have closer relationships than those they made in the military. That is not a good thing or a bad thing, that is just a matter of fact and something you need to understand. It is not a competition between his military friends and you; they are people who shared a very intimate part of his life, and you should want to be close with them, too.

4. Appreciate his loyalty. Many military creeds reference loyalty or unity. Military men are used to their band of brothers, and are bred to be loyal and protective. He will love you fiercely and be the most faithful companion, if you can promise the same.

5. Get over the air of authority. Some branches of the military (I’m looking at you, Marines) have a feeling of superiority over others. Granted, that is earned due to the nature of their work and how much they put on the line. However, in the civilian world, or in a relationship, it may be a little hard to deal with. His way is the best way because he knows best. Especially if he is coming from a higher rank, it may be increasingly difficult for him to “fall in line” with civilian life. You need to understand this and realize how difficult it is.

6. Recognize the invisible wounds. Not every soldier comes home with post-traumatic stress. However, for those who do, there is nothing wrong with that. Just keep in mind that the chances of him wanting to open up and talk about it — let alone seek help — are slim to none, at least at first. This will be trying for you, but imagine how he feels. Expect sleepless nights, and bouts of being on the receiving end of awkward silences. These things happen. You need to try your hardest to understand, get him to eventually talk about it (preferably to a professional) and pretty much avoid all triggers — like war movies.

7. Enjoy the fun facts. Military men have likely traveled to parts of the world you have not, and can tell you facts about different cultures/countries/states. You will be inundated with more random facts about places like the Middle East or the South than you care to cram into your brain. Trust me, eventually, they will come up. I won a round of trivia just because I knew the currency in Bahrain. Fun facts are everywhere, and it doesn’t hurt for you to sound more worldly too!

8. Don’t forget to show your pride. I am a sucker for someone who is passionate about his work. Service members fight to defend our country. They are modern day heroes; if that’s not something to be proud of, I’m not quite sure what is!

9. Let him do the driving. Military men are used to being thrown into countries and situations with which they are unfamiliar, so when traveling, always expect to have a great navigator around.

Basically, dating a Generation Y military man is no different than dating anyone else. Sure, they have baggage, but don’t we all? His may be unimaginable to you, but that does not make him any better or worse. Dating a service member is not all fun and games; it takes a lot of work and patience, but if you are interested in the person and not just the uniform, then he is definitely worth the pursuit. Also, if you are lucky enough to date one (or some!) of our country's finest service members, don’t feel like you have to abide by all of these guidelines. Just be a decent human being and you will get decency back.