Military Families Need To Get Over Their Sense Of Entitlement

There’s an old joke about a hunter who goes into the woods with his rifle to go bear hunting. He... 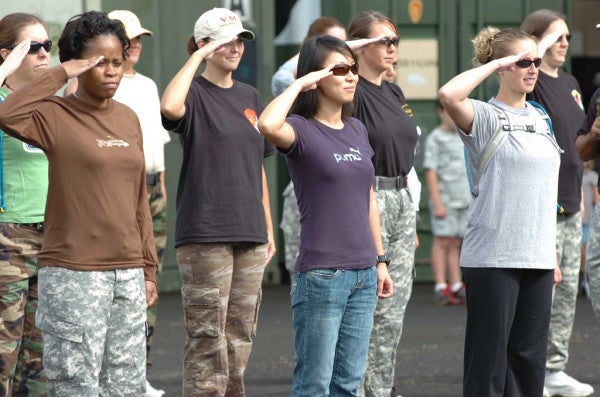 There’s an old joke about a hunter who goes into the woods with his rifle to go bear hunting. He finds a good hide, so he settles in and waits to see a bear. Eventually he feels a big tap on his shoulder. It’s a huge grizzly bear, who smiles, proceeds to have his way with the hunter, and leaves. Enraged, the hunter comes back the next week with a machine gun and finds another spot, determined to shoot the bear. He feels a tap on his shoulder. The bear has his way with the hunter again. Finally, red-faced, the man gets a rocket launcher and goes to the forest once more. He feels yet another tap on his shoulder and turns to see the bear again. The bear smiles and tells him, “I’m beginning to think you aren’t really here for the hunting.”

In other words, one can pretend to be upset, but if you keep doing the same thing over again, that speaks for itself. As with the hunter, there’s a big difference between what people pretend they want and what they actually want. That is the difference between stated preferences and revealed preferences. I’ve discussed this before in regard to the sense of entitlement many service members express. You and your family’s first hitch with the military is the difference between you and average civilians. That is indeed something to be proud of. You paid back your debt to America. After that obligated service, you’re doing it either because you like it or because it’s the best deal you think you can get. With that in mind, everyone needs to quit acting as if people owe service members or their spouses anything other than the pay and benefits they’re entitled.

An entitlement mentality one degree removed, that via marriage, is even more off-putting than a service member’s. The military spouse “Toughest Job in the Corps/Navy/Army/Air Force” window stickers seen on any number of vehicles in commissary parking lots speak to this. Really? Being a military spouse is tougher than jumping out of a plane, disarming an improvised explosive device, or landing an aircraft on a ship? Change jobs for a moment. Put the military spouse on short final to an aircraft carrier and drop the service member into a minivan and see who dies first.

Being proud of one’s military spouse and deriving one’s identity from the military are two different things. Spouses have earned neither the deference nor the rank due their service member. Are there sacrifices involved in a military lifestyle? Yes. But especially when that military family chooses to re-up for another tour, they are like the hunter going after the bear the second time. They have voluntarily chosen that life with full knowledge of what they are getting into and decided that the pros outweigh the cons.

Is Tricare a pain sometimes? Yes. But try to find an entry- or mid-level civilian job with full medical coverage and hardly any copays. Are service members away from their families a lot? Yes. So are long-haul truckers, salesmen, and merchant sailors. Do military spouses worry about the safety of their service members? Absolutely, and rightfully so, but there are plenty of jobs that are just as dangerous, if not more. Is the pay princely? Absolutely not, but a married E-6 with eight years or more of service receiving the average basic allowance for housing is already above the U.S. median household income by the age of 26 or 27, even if his or her spouse doesn’t work. All things considered, there are likely many civilian families growing tired of the sympathy given to military families when they’re barely keeping up themselves. Sometimes, military spouses and family members need to appreciate the blessings they have.

The hard, unpleasant truth is that many of the problems some military families have are at least somewhat self-induced. For example, many military families get food and other aid during the holiday season. For a good number of them, this isn’t because the military is screwing them over, but because they married very young and had kids immediately thereafter. Almost anyone, military or civilian, who chooses to do that is voluntarily putting themselves in financial jeopardy.

That doesn’t mean we shouldn’t help, but it does mean that the military, and its leaders, have to do a better job of teaching and mentoring our own, and not rely on the goodwill of civilians. The military as an institution needs to marshal its resources and effort toward helping those families whose issues are truly directly related to military service, e.g., those with veterans disabled through military service.

All this isn’t to say that being a military family isn’t trying at times. For example, regular moves can make it difficult for spouses to maintain careers. But life is tough for a lot of Americans both in and out of the military. While most civilians will cut a break to a service member, because they know that direct physical danger is tough no matter how you slice it, that won’t always transfer to a service member’s family. And those family members have to understand that it’s just the way it is.

Military families have some unique challenges, but it’s not incumbent upon civilians to accommodate that. All that those challenges give military families is the opportunity, and perhaps even the obligation, to share those stories with others, and to help them in the process.