Under U.S.C 38, Chapter 63, the Department of Veterans Affairs is obligated to conduct outreach to inform veterans, survivors, and... 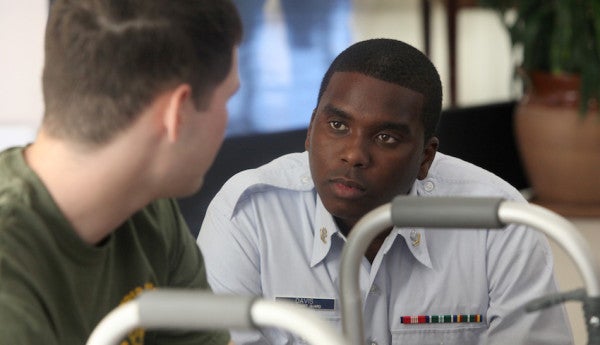 Under U.S.C 38, Chapter 63, the Department of Veterans Affairs is obligated to conduct outreach to inform veterans, survivors, and their family members of the benefits and services to which they are entitled. However, many veterans and their families still lack crucial information about the full scope of VA services.

Task & Purpose recently spoke with one veteran — Jared Moore — who was suffering from post-traumatic stress disorder. His family was unaware of the Veterans Choice Act, which could have drastically improved their quality of life. Though the bill was passed in 2014, the Moore wasn't informed of it until early 2016.

But he is just one among countless others who have had trouble navigating the VA’s complex bureaucracy.

“Explore VA is our primary digital outreach tool that describes the nine benefit and service lines, along with testimonial videos,” according to Walinda West, VA’s deputy director for media relations. “Outreach may include the coordinated and integrated use of traditional and social media, advertising and marketing programs along with direct involvement with veterans at local events.”

Related: Four key things that need to be proven in a VA benefits claim »

In an email exchange with Task & Purpose, West also pointed out that there are 300 centers located around the country where veterans can walk in with no appointment to seek access to care. She added that voluntary services engage with thousands of volunteers and organizations to assist veterans and their families. And the department is currently working to overhaul its communications system to close any gaps between veterans and the services they’re entitled to.

“VA is in the midst of the largest transformation in its history with MyVA. The hallmark of that transformation is engagement with veterans, the organizations working on their behalf, and employees,” West said.

Still, the VA will have to work hard to eliminate the communications gap the and rebuild veteran trust.

In an interview with Task & Purpose, Ryan Gallucci, deputy director of the VFW National Veterans Service, said the communication issue is complex.

“I think it’s multi-faceted,” he said. “I think some of this is spillover from how we used to transition service members out of the military into the veterans community.”

He added, “Sometimes when you leave the military, you stop seeking out information for what many of us who still work would consider traditional outlets. Whether it’s Task & Purpose, or Military Times, or even looking at the military’s website, it may not be the first place you go.”

“On the VA side, I feel that sometimes it is an issue with communication or how VA communicates their programs, who programs serve, and how to tap into them,” Gallucci said.

According to Gallucci, the VA’s implementation of new programs often poses problems, leaving gaps in communication between the department and veterans. As the department has moved into more digital outreach, that disparity has widened.

Gallucci, who is also a veteran, shared a personal anecdote about the current system being unclear sometimes, alluding to the multiple accounts that veterans need for various services.

Under this system, veterans benefits are currently spread between the e-Benefits portal and MyHealtheVet portal, both of which require separate accounts, and it can be difficult for veterans to keep track of benefits across multiple platforms.

In a separate case reported by Scripps News Washington Bureau and WCPO, Vietnam veteran Ted Dickey struggled to physically find a Veterans Choice program coordinator in his VA when he was assigned to the program for hip replacement surgery.

“She shared a phone with someone else, and (had an) office in the basement that was restricted where the vets couldn’t get to her. I got lost for about six weeks. The right hand didn’t know what the left hand was doing,” Dickey said.

Still, Gallucci said he was optimistic that Secretary Robert McDonald will be able to implement real, effective change and streamline the system for veterans.

“As far as improving communication, I think the team that Secretary McDonald is trying to assemble is serious about it.”