The Injury Afflicting Veterans That No One Wants to Talk About

The wars in Iraq and Afghanistan, while long and bloody, are the first modern wars with high survival rates, meaning... 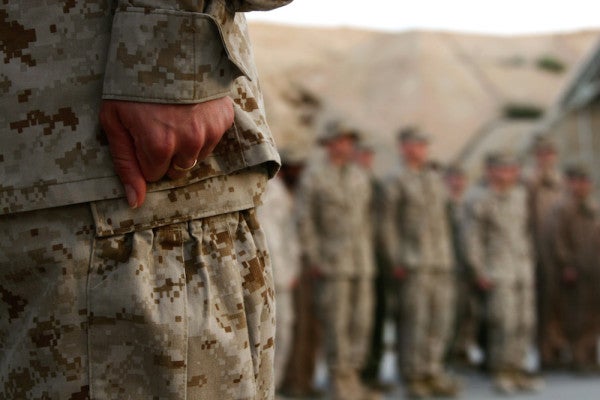 The wars in Iraq and Afghanistan, while long and bloody, are the first modern wars with high survival rates, meaning service members are enduring more complex and catastrophic injuries than ever before. Due to the nature of the tactics employed by the enemy, veterans are coming home with multiple amputations, severe traumatic brain injury, and genitourinary injuries, or injuries to the reproductive organs and the urinary system. How these types of severe injuries, to include post-traumatic stress disorder, affect veterans’ sexual function, fertility, and ability to be intimate has largely been left out of the discussion. This is due to a lack of education on the issue, a lack of research, and institutional biases that don't allow for sexual health to be treated as an integral part of recovery within the military.

The first-ever public forum on this issue was presented by the Bob Woodruff Foundation during a two-day conference beginning Dec. 11 in Washington, D.C., called Intimacy After Injury. The event brought together medical professionals from across the country as well as policy experts, Department of Defense and Veterans Affairs representatives, and several family members of veterans to speak out on this critical yet undiscussed problem.

It was a groundbreaking event. Each panel brought forth a different aspect of the issue whether medical, psycho-social, personal, or policy related, pointing to the fact that the DoD and VA lack proper policies and practices for treating veterans suffering from infertility and sexual dysfunction due to combat-related injuries. While innovators within DoD and the medical community at large are beginning to make changes and give this issue a voice, much still needs to be done. What was also evident is that the problems and injuries women veterans face continue to be marginalized, as the event largely focused on male sexual function and infertility. This points to the lack of understanding and research on the issue as well as the need for more open and frank discussions on the topic.

At the start of the conference, Dr. Jean Orman, the chief of epidemiology and biostatistics at the U.S. Army Institute of Surgical Research in San Antonio, Texas, pointed out that in a VA-led study on Iraq and Afghan War veterans conducted from 2001-2011, genitourinary injury patients experienced more chronic pain, PTSD, and traumatic brain injury, or TBI, as well as infertility issues, compared to non-genitourinary injury patients. Often injuries to the genital area that result in complete or partial loss are looked upon as more severe than other amputations, especially to the patient who may also suffer loss of sexual function, PTSD, and infertility. Yet problems with sexual function do not just occur in genitourinary injury patients alone, but in patients suffering from PTSD and TBI as well. According to Military Times, between 2000 and 2013, almost 2,000 service members received debilitating injuries to their genital regions, and more than 307,000 troops experienced some type of head injury, which can impact sexual function and drive.

Dr. Mitchell Tepper, a sexology consultant who advised the VA as well as Walter Reed Hospital on the issue of sex and intimacy after trauma, stated that “peak sexual experience happens when there is trust and safety,” and that often “connectedness” matters more than “physical and genital function.” Trust and safety are two issues strongly impacted by PTSD and TBI and can prevent the veteran from being intimate. PTSD and TBI, according to Dr. Emilie Godwin, the director of physical medicine and rehabilitation at Virginia Commonwealth University, most profoundly affect the patient's identity, which in the military is often linked to bravery, strength, and fortitude; yet after trauma, is restructured to make the patient feel weak, fearful, and unsafe. Warm, empathetic support from personal relationships is key to recovery from these injuries.

To date, discussions on sexual health have largely focused on disease function rather than intimacy. This not only creates a huge gap in understanding, but also in treating the patient. The complexity of these types of injuries requires immediate response by medical professionals, as well as support for the family members and partners of these veterans who go from being spouses to caregivers overnight. Many of the personal experiences of those speaking at the seminar expressed a lack of understanding from within DoD and the VA on sexual function issues. Stacy Fidler, who advocates for her son, a Marine lance corporal who suffered a severe lower extremity injury, stated how she had never thought of “single guys” as a population affected by problems with sexual function.

“These are young men who are not thinking about possibly losing the ability to have children,” Fidler said. A conversation on the topic in the run up to deployment is simply non-existent and policies in place for sperm-harvesting immediately after injury have yet to be thoroughly implemented. There is further marginalization on the issue as a whole within the institution of the Army where sex therapy is not credentialed and the role of intimacy, specifically, is not spoken of as a means to healing. Yet as Dr. Godwin pointed out, personal and intimate relationships are essential and basic aspects of human nature. When we lack connection to others, we lack the ability to heal.

If the importance of sexual function and intimacy overall is left out of the discussion being had with veterans who suffer genitourinary injuries, then it follows that there would be a gap in policy as well. There are advocates on Capitol Hill fighting for a voice on this issue, yet it is often trumped by other veterans issues. One aspect of policy that advocates seek to change is that of in vitro fertilization treatments for service members and their spouses. TriCare covers treatments for severely injured service members only, who are on active duty and meet certain requirements. However, when a service member gets transferred to the VA system, his family is no longer eligible for IVF. There have been measures put forth to Congress, but these have not come out of the House Committee on Veterans Affairs yet. Neither DoD nor the VA covers a gestational carrier or surrogates as an infertility treatment. And there are no known policies in place for female veterans with similar injuries who cannot carry a child to term or have lost sexual function due to PTSD or traumatic brain injury.

There is no clear structure in place yet that can handle such intricate and complex policy problems. LTC Daniel Gade, a professor of ethics at West Point and an Iraq War veteran, pointed out that we lack the framework to solve the issue at the macro level. “So far we have looked at the active-duty military, but what about reservists and guardsmen? What about injuries in training versus in combat?” he asked.

I would add, what about female veterans suffering the same types of injuries? Where is the discussion and policy implications for them? Additionally, Gade warned that we should be careful as we forge ahead because “pity makes a poor rationale for policy.” Therefore, we need to be asking the right ethical questions on what the country should pay for regarding these injuries and infertility. We need to collaborate with the private medical community on research and adaptation into the military sector and vice versa.

The Bob Woodruff Foundation began the conversation, it is up to us to keep it going for those silently suffering and those who will suffer in the next war.