How These 3 Service Members Are Saving Lives, One Text At A Time

Leaving the military means closing the door on one chapter of your life before moving on to the next, but... 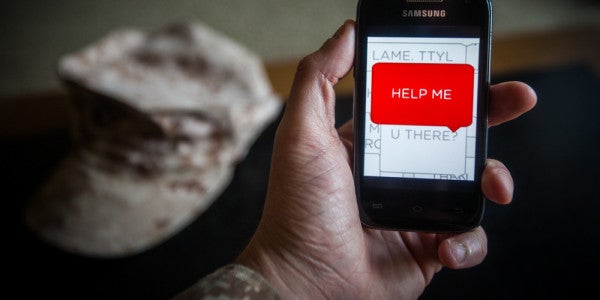 Leaving the military means closing the door on one chapter of your life before moving on to the next, but sometimes something goes missing during that transition: purpose. For some, they’ve found it again through a different kind of service, specifically through a 24/7 crisis hotline called Crisis Text Line, which provides emotional support to those in need through text messaging.

Depression among teens, the primary users of Crisis Text Line, can have dire consequences, with suicide being the third-leading cause of death for Americans between the ages of 10 and 24, according to the Centers for Disease Control and Prevention. Within that same age group, texting is nearly universal with the average young adult sending nearly 2,000 texts a month.

Task & Purpose spoke to two veterans and an active-duty service member with Crisis Text Line to find out why they volunteer their time, and what their military service adds to their work as counselors.

When Aaron Amrich left the Army in 2009 after eight years of service and deployments to both Iraq and Afghanistan as a paratrooper, he felt set adrift. For years he prepared for and served in combat where he was able to directly impact the lives of those around him, and abruptly that sense of purpose was gone. Physical injury and post-traumatic stress prevented Amrich from continuing the kind work he had done as a soldier, with jobs in the military and law enforcement no longer an option.

Photo of Aaron Amrich while deployed to Iraq.Courtesy photo.

While he was searching for volunteer opportunities, he found Crisis Text Line and through them, he rediscovered something he had been missing: the chance to protect and help those in need, and ultimately, to help himself.

“As a person with PTSD depression and stuff like that from my time in service, I figured I would have a unique insight into what’s going on with people who are going through the same things I am,” Amrich told Task & Purpose. “Why not use what I’m struggling with to help other people, and in turn they helped me put a lot of feelings I did not deal with into proper context. It was a win-win situation for both of us.”

Amrich also helped to expand the text line’s base of veteran volunteers, and encourages veterans to consider volunteering as a way to recapture the sense of belonging and purpose they may have lost after leaving the military.

“I’ve had conversations with people that will stay with me forever, and it’s awesome,” said the 34-year-old Army veteran. “I still feel that not only do have a unique insight, they have the capacity for empathy that is a great quality for someone that’s trying to help people. That in turn will both help them connect with other people, and help those people they’re connecting with have a positive impact on a veterans life.”

For Airman 1st Class Zachery Deuyour, it wasn’t enough to volunteer to serve his country, he decided to offer up his personal time to Crisis Text Line, committing a few hours every week to the text line. When asked why, he off-handedly and humbly replied that his father always cautioned that idle hands lead to stupid decisions.

However, with a little pressing, Deuyour admitted that it’s more than that. For the 26-year-old airman, service can be as rewarding as it is selfless.

“The most rewarding part has been every interaction I’ve had with people in need,” said Deuyour, who works on a team that helps out when call volumes are particularly high. “On each of those active rescues, I think back to that humble feeling that I’m part of something greater than myself.”

For him, one of the biggest realizations from working at the text line has been understanding that help really can be a call or text message away, and not just for the those who use the service, but for veterans and other service members.

“I would encourage those who have an empathetic need or if you feel like you need someone to talk to, there’s always help out there,” he told Task & Purpose. “There are voice services and what not, but if I could tell any veteran or active-duty member in need, if you need help, there’s something out there for you — you don’t have to go through it alone.”

While serving in the Army Reserves and then the Wisconsin Army National Guard from 1990–2001, Tania Behselich held several different jobs, but it was her time as a flight medic that fulfilled her desire to help others in need. Yet, after leaving the service and suffering a back injury that impaired her movement and kept her from civil service and crisis work, she lost her sense of purpose.

She said she found it again when she began working at Crisis Text Line in October 2014. For Behselich, the chance to connect with and directly impact those in need has been reinvigorating.

“I’d been looking for something that was like the Guard,” she told Task & Purpose. “I love to help people. I love crisis type of work, and unfortunately my back is not good any longer.”

Behselich’s work at the crisis line has impacted not just those who use the service, but her as well. The way she talks about her time in the service, it’s clear that she revelled in, and excelled during crisis situations.

“It’s like I’ve found my love again of helping people in crisis,” she explained. “In a way, it kind of saved my life — joining Crisis Text Line — because I had purpose again. I’d been walking around, not able to do physical type work. I was a firefighter, I was a paramedic, and allowed me to repurpose my life’s vision and mission.”