One special operations veteran is taking his charity work a lot farther than most — more than 30,000 feet farther.... 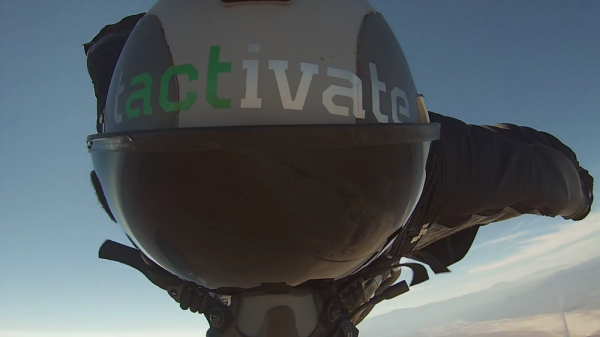 One special operations veteran is taking his charity work a lot farther than most — more than 30,000 feet farther.

To raise awareness for the Special Operations Warrior Foundation, retired Air Force Master Sgt. Jimmy Petrolia will try to break two world records — for time in the air and distance travelled — when he leaps from an airplane in a wingsuit on Veterans Day, Nov. 11. The foundation supports the children and families of special operators who have died in the line of duty.

Tactivate, which is sponsoring the jump, is an organization that brings together members of the special operations veterans community and startup entrepreneurs. Tactivate will also be leading a series of events and providing invitees the opportunity to perform their own high-altitude jumps.

Jimmy Petrolia in his wingsuit prior to a jump.Courtesy photo.

Petrolia, a 44-year-old pararescueman, is a veteran of just about every major military engagement from 1990 to his retirement in 2012. He served his country both in the air and on the ground in Iraq, Afghanistan, and the Horn of Africa, and now wants to give back to the special operations community and the veterans he served alongside for years.

“The biggest thing to take from this, is that the jump is unique, it’s exciting, and it’s definitely getting people’s attention, but we need to remember why we’re getting all this attention,” Petrolia told Task & Purpose. “The American patriots that went out and signed their names on the dotted line. They went and did the work. They protect your freedom. And now it’s time to help them out when they need our help. That’s what this is all about: giving something back.”

The two records Petrolia hopes to break are currently held by Japanese wingsuit pilot Shin Ito, who flew 16.7 miles in a wingsuit on May 26, 2012, and the late Colombian skydiver Jhonathan Florez, who holds the record for time in the air with his 9 minutes, 6 seconds-long flight. To break these two records, Petrolia and his team will need to fly their plane over 30,000 feet, with the hope of reaching 37,000 feet.

Fortunately, flying at such high altitudes — which requires breathing equipment — is somewhat of a specialty of Petrolia’s, who says he relies on his experience in the military performing high altitude, low open, or HALO, jumps.

Petrolia began flying wingsuits during his last few years in the Air Force.

“Leaving the aircraft is like a total sensation of freedom. … It’s overwhelming. The endorphin rush you get after and how good you feel after that is amazing to me,” said Petrolia, who added that using a wingsuit was akin to “rediscovering parachuting” all over again.

“You’re your own airplane. You’re almost like a bird. You can literally fly across the sky and bank turns,” Petrolia says. “It’s probably as close as you're going to come to being your own fighter jet.”

Check out Tactivate's crowdfunding page for more information about how you can get involved.

Watch Jimmy Petrolia jump out of a plane in his wingsuit.