This Man Served In WWII. Now He Knits Hats For Other Vets

During World War II, Bob Bolton was an Army medic serving in Okinawa and the Philippines, where he patched up... 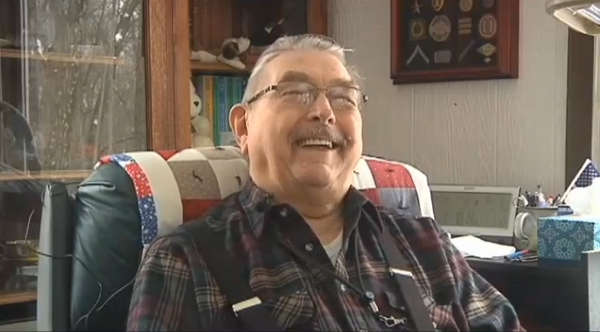 During World War II, Bob Bolton was an Army medic serving in Okinawa and the Philippines, where he patched up wounds and earned a Bronze Star for valor after digging men out of collapsed trenches with his bare his hands following a Japanese attack.

Now, the 93-year-old man from Sullivan, Wisconsin, uses his weathered fingers to knit hats for his fellow veterans, according to the Daily Union.

About two years ago, Bolton’s legs began to give out and he was forced to give up his lifelong hobby: woodworking. Bolton had to find another way to fill the void. One day while watching his wife, Betty, knit hats on a loom, he decided to take a crack at it.

“So she showed me what she was doing and I took off,” Bolton told a local ABC news affiliate, WKOW.

Bolton uses a round loom to make a hat by wrapping yarn around the pegs in a circle. Each hat takes about 1,400 loops. When he first started one hat would take him about five hours. Now he has that down to three.

It wasn’t long before Bolton and his wife had a stack of hats and didn’t know what to do with them. They began selling a few and giving most of them away.

This year, they donated hats to the veterans services offices in the area because as Bolton remarked, veterans “deserve (hats) more than anyone else,” reports the Daily Union.

“I'd rather give it to somebody that deserves it than just anybody,” Bolton told WKOW. “I made up my mind, I’m gonna give it to veterans. And they're brothers, I’m a veteran myself.”

In the past two years, Bolton and his wife estimate that they’ve given away more than 400 hats.

“The only reason I make them is for something to do,” said Bob. “I do four or five sudoku puzzles every day, a few crossword puzzles and then I run out of things to do.”

Bolton served in the military from October 1942 to Christmas Eve 1945 and was awarded two Purple Hearts after taking a piece of shrapnel in his knee, and for another wound he couldn’t recall, reports the Daily Union.