Every morning, Katie Moore gets up to feed her 1-year-old baby. The first one awake, she then prepares breakfast for... 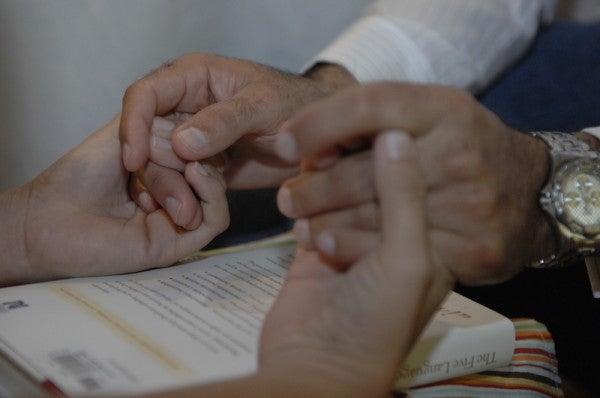 Every morning, Katie Moore gets up to feed her 1-year-old baby. The first one awake, she then prepares breakfast for her four other children, ages 10, 10, 8, and 3. This is the norm for her and her husband Jared, an Iraq and Afghanistan veteran who has post-traumatic stress disorder.

When he wakes up, he makes coffee — it’s a routine Jared developed serving 10 years in the Air Force as tech sergeant before he re-enlisted in the Army for four years as sergeant under the 2nd Chemical Battalion.

In order for Jared to remember what to do after drinking his coffee, Katie must leave a list of reminders in the cabinet by the coffee maker.

“He has to be reminded of daily tasks: feeding the kids or feeding himself, brushing his teeth, taking a shower, taking his medication,” she tells me.

For Katie and Jared, PTSD has been both a blessing and a curse.

According to Katie, “It’s had its times … it has impacted our marriage, but I think ultimately it has made us closer.”

While she says it was a test that made their family stronger, it took time for them to get the routine settled, and there are still bad days.

“Some days … there’s no motivation to get up or do anything, and then some days he just can’t sit still,” Katie says. “Nights are the hardest, and they’re the worst.”

Jared sometimes experiences nighttime “episodes” brought on by various outside triggers, like war movies, fireworks, or recalling his deployments. He’ll often be wrapped tightly in all the blankets and sheets from their bed, shaking, or drenched in sweat. There are occasions where she can talk him out of it, but other times, she has to let him ride it out.

While their home life is now more manageable, one of the biggest issues they face as a family is treatment availability.

“It took us a while to try to get into a groove, for me to figure out how to help him,” Katie says. “Our oldest daughter — she’s 10 — she’s starting to learn how to help him too.”

According to Dr. Ziv Cohen, a New York psychiatrist who works with PTSD patients and their families, “Close family are very important to people with PTSD.”

Jared was medically retired in 2013, after a surgery left him in pain and unable to continue serving.

“He had a back injury, and they did a surgery and it went wrong,” Kate explains. “They had to do an emergency surgery a week later, and from that point they found him unfit for duty.”

2013 was also the same year he was diagnosed with PTSD.

“At first, it didn’t really change anything, because we had seen symptoms beforehand,” she said.

He is one many veterans who is suffering from the disorder. In fact, the Department of Veterans Affairs reports that 11-to-20 out of 100 Operation Enduring Freedom or Operation Iraqi Freedom service members have experienced or will be diagnosed with PTSD.

Katie added that so far there has been much more emphasis on the psychological aspect of his care, with little focus on his pain management.

In regard to the comprehensive care that veterans often need, Cohen explains, “The level of support need in order to reintegrate into civilian life … that can be anywhere from physical or medical care, to psychological care, to social support for veterans and their families, to career reintegration.”

Jared has largely dealt with his back pain through painkillers prescribed by VA doctors. For his PTSD, he is seen often at an outpatient center in Chattanooga, Tennessee. He also is no longer able to work even as a civilian.

“He was having a hard time coping, and when he saw a psychiatrist here in Chattanooga, she maxed out the level of his medication,” Katie says. “Within 10 minutes, he was falling asleep standing up.”

The Moore’s frustration with the VA is one felt by countless families dealing with both medical and psychological health issues after separation.

According to Cohen, multimodal care is often required by veterans, and “one of the problems of course is when a veteran is facing a barrier to care.”

Despite the fact that it was passed in 2014, the Moores only found out about the Veterans Choice Act recently. And although they are waiting to see if Jared is eligible, that doesn’t account for the nearly two years that they have gone without knowing of its existence.

The legislation gives veterans the option to seek treatment in the private sector if the nearest VA facility is more than 40 miles from the veteran’s residence, or if there’s a wait time longer than 30 days.

Because this information was not made easily accessible, over the last three years, the Moores — who live in a small town in Georgia — often spend several hours a week traveling to various VA hospitals in addition to the outpatient center in order to get the necessary medical and psychological treatment Jared requires.

And there is no guarantee that they will be eligible for the Veterans Choice Program.

In 2015, a Veterans of Foreign Wars survey showed “80 percent of the 1,068 survey participants who reported that they either lived 40 miles from a VA medical facility or could not be seen by VA within 30 days said they were not afforded the choice to receive non-VA care.”

Ryan Gallucci, deputy director of national legislative service for the Veterans of Foreign Wars, told Task & Purpose in an interview that the VA can make exceptions for families with extenuating circumstance.

According to Katie, in order to get treatment for his back pain, the Chattanooga VA requires them to go to either Murfreesboro or Nashville, which is a two-and-a-half hour drive.

She added, “With Jared having two back surgeries, which neither one of them worked, he can’t take that drive.”

This puts undue strain on Jared physically, and by extension, Katie and their children, who see much less of each other as a result of constant travel.

Still, for the Moores and countless other families, the task of appealing to the VA can be daunting without help.

Cohen said that veterans advocacy organizations are becoming more and more necessary for separating service members and their families to get all the benefits the VA offers.

As for other families dealing with mental health issues, Katie said, “PTSD has no limits, and there’s nothing that person can do. The loved one of the person suffering from PTSD … they just have to remain strong. The most important thing is to make sure that the one suffering knows that are there.”