From ‘intense darkness’ to the Army’s NCO of the Year: How this medic made an example of himself

“I just want soldiers, NCOs, whoever it is … to realize that sometimes your best moments are going to come after intense darkness.” 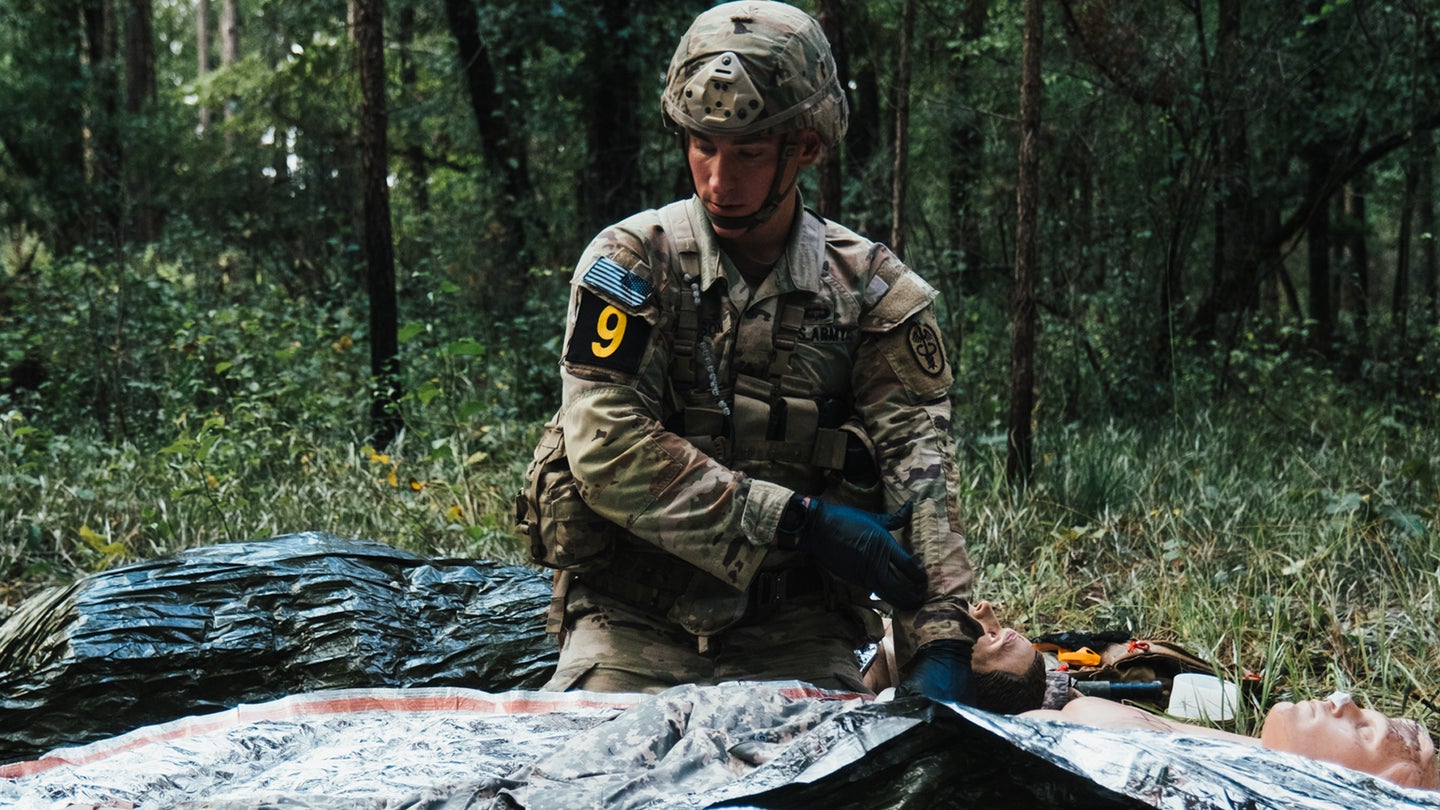 Sgt. Garrett Paulson never expected to be named the Army’s Noncommissioned Officer (NCO) of the Year — mostly because there was a period last year when he wasn’t sure he’d still be alive.

Paulson, a medic at Fort Polk, Louisiana, comes off exactly how you’d expect an Army NCO to present themselves: self-assured, steady, physically fit, and serious. Nestled away from the chaos at the Association of the U.S. Army’s annual conference, Paulson spoke matter-of-factly with Task & Purpose about his new title, and his squad’s competing in the Army’s inaugural Best Squad Competition this year.

But he also spoke about the incredibly low point of his life that he’d fought tooth and nail to get through. He spoke about his thoughts of suicide, which only his love for his family kept him from acting on, and which he tried to overcome by spending hours in the gym, giving himself something else to focus on.

Mostly, he spoke about how important it is for NCOs to set an example for their soldiers — not just in physical readiness and ability to complete the job, but in listening to one another, and in taking care of themselves mentally.

“I think the most important part about being a leader is your ability to listen,” Paulson said. “I mean obviously leading and teaching is huge, but I’ve had NCOs in my past that can lead and teach, but they seem inhuman. And I think that’s something that the Army is starting to, or has been kind of shifting away from as we realize that mental health and behavioral health issues are very prevalent and we start to try to combat those. So I really think listening and being an active part of the solution, not a sideline player.”

At only 28 years old, it seems Paulson has figured out what takes some leaders a lifetime to learn.

Paulson’s entire family is military. Both of his parents served, in addition to uncles and great-uncles, and by the time he was in high school, his sister was in ROTC in college; today, she and her husband are both officers in the Air Force.

But Paulson wanted nothing to do with it. He had “no intentions” of joining the military, he told Task & Purpose last Wednesday. That was, until he’d finished high school and realized he wasn’t in “a great spot professionally, or personally.”

Paulson went through the enlistment process but had to get a medical waiver because of some previous ankle surgeries, and the process to get a waiver took so long he said he changed his mind about enlisting before it was finished. But he came back around to it a couple of years later, submitted the waiver, and was off before he knew it.

“I think the best way for me to go get a fresh start — a complete renovation of what’s going on — is to enlist, go somewhere across the country most likely, and start over from there,” he said. “I knew that I was better than what I had done and I had more potential than that, so I wanted to find a way to do that.”

It was only supposed to be four years to “rebuild [his] confidence,” he said. None of it went like he’d planned.

After getting to his first assignment with the 2nd Brigade Combat Team, 82nd Airborne Division, Paulson started experiencing one hardship after another. He went through his first divorce, which ended while he was deployed in 2020 to Iraq, and his personal life got “pretty rough” after that. He had a second divorce, and felt that things were getting worse and worse, especially because he was far from his family and his friends. He grew to hate Fort Bragg because it was where all of these things were happening to him. He reached a point last year, he said, when he sent his mom a text that said he “might not be around” anymore.

“Legitimately, I was in such a bad place that the chances of me committing suicide or hurting myself were at an all-time high for months,” he said.

Thankfully, he never did. Paulson said he found solace in the gym and began frequently exercising, finding it a healthy outlet for the complicated feelings he was wrestling with. But he also reached out for help — he said he began going to behavioral health appointments, and even in the midst of his own struggle, he knew it was essential to set an example for his soldiers.

“I knew that some of them were in a very similar place but they felt like they couldn’t talk about it or they couldn’t seek help, so I was making every effort I could to like, write my appointments for behavioral health really big on the whiteboard — huge — to let them know like, hey, you can do this too, and no one is going to treat you differently,” Paulson said. “I took soldiers to behavioral health when they wanted to, I had to sit in the ER with soldiers who got far closer than I did to actually doing anything because they had seen me go through those things and they trusted me to take care of them.”

It was nervewracking at first; Paulson said he wasn’t sure what would happen, or if he would face any repercussions himself for doing it. But he knew of one soldier in particular who was going through “a really hard time,” and who wasn’t “getting the help they needed … by even their NCO support channel.” Paulson recalled that he heard others discussing the soldier in question, but no one was taking action. So he figured he might as well be the one to do it.

“I thought it would be in her best interest as well as, you know, everybody that was seeing that to see that you could be in a leadership position, you could deploy with a platoon as their medic, you can do all of these things, and you can need help with something that is completely not attached with the military and it’s okay,” he said.

All of this came full circle when he and his team began competing in the Army’s first-ever Best Squad Competition. The week-long competition puts squads through continuous physical and mental challenges. All the while, the squads were being monitored and scored on their ability to work together as a team.

Paulson said when he arrived at U.S. Army Medical Command at Fort Polk, Louisiana, his team was busy choosing two NCOs to compete with them. He urged his first sergeant and sergeant major to allow him to compete with them, and ultimately they did. His motivations for each stage of the competition leading up to the final Best Squad Competition were specific: The regional competition was for his family. He’d told his mom “so many times about my intentions to take myself out of the world that I needed her to know I was okay,” he said.

The next phase of the competition was for the soldiers in his squad that he was competing with. It was “very much for them,” he said. And finally, at the Best Squad Competition, part of his motivation was to leave it all at Fort Bragg. He’d proven what he needed to prove to himself, and he was finally on the other side of that low period of his life. But he wanted it to be over, once and for all. But after talking with his mom, his perspective changed.

“My mom’s like, ‘Why can’t your motivation, why does it have to be a personal vendetta against something? Why can’t you just go out there to win?’ So that’s kind of what I landed on, essentially,” he said. “She was right, I didn’t have anything else to prove, no one could ever take away MEDCOM NCO of the Year, no one could ever take away being part of the inaugural competition. So why not just go out to try to win something?”

Ultimately, the MEDCOM team did not make it to the final four squads and did not win the competition. Paulson said he would trade NCO of the Year for Best Squad in a heartbeat if he could, and has tried to make it clear to his soldiers — who, from the way he speaks about them, he clearly cares for a lot — that his success is just as much theirs, as it wouldn’t have been possible without them.

Now, Paulson is ready for whatever comes next. He decided to re-enlist for another four years last summer, despite his original plan to do his first four and get out. While at first his main reason for not really taking action to hurt himself was his family, he has “so many more reasons than that” now. And he’ll likely start dialing it back at the gym a bit — it did what he needed it to do in the moment, which was to help him find a healthy outlet for the at-times overwhelming things he was feeling, but he doesn’t quite need three hours a day in the gym anymore.

“I still have days that are bad,” he said, “But if anything coming out of this competition, I just want soldiers, NCOs, whoever it is that reads this or hears it to realize that sometimes your best moments are going to come after intense darkness.”