‘I Have Already Killed Many Taliban’: Afghan Commando Reflects On Fighting For 12 Years

Editor’s note: This is a dispatch by T&P; correspondent Marty Skovlund Jr. who is reporting on the ground from Afghanistan.... 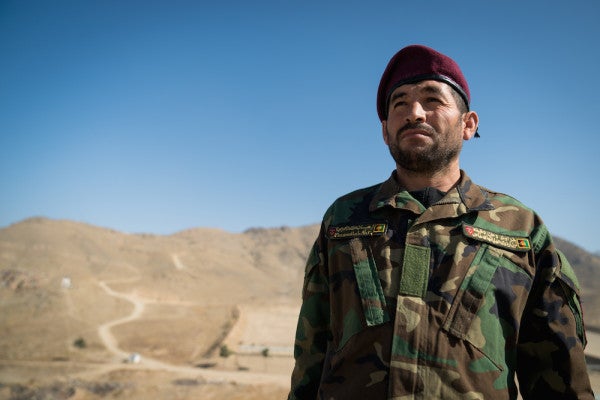 Editor’s note: This is a dispatch by T&P; correspondent Marty Skovlund Jr. who is reporting on the ground from Afghanistan.

“My first advice for the Taliban is to come back to the straight path,” said Ehsanullah Akr as he squinted into the bright afternoon sun, echoing the same “reintegrate or die” mantra I’ve heard many Afghan soldiers say when asked about the enemy. Akr doesn’t know how old he is, but he does know he’s been fighting the Taliban for 12 years as a commando “in almost every province of Afghanistan.” Despite a bullet wound to the shoulder he sustained during a fierce battle in the mountains, he continues to wear the commandos’ distinctive maroon beret.

I met Akr on top of Punishment Hill, which overlooks Camp Commando, an Afghan special forces training center just outside of Kabul. It’s a steep ascent for any commando recruit who finds himself on the bad side of the NCOs who run the selection course. Akr was pulling duty in the Punishment Hill guard tower when we arrived, and was very excited for me to take his picture on the condition that he get a copy to show off. I agreed and, being a disciplined soldier, Akr rushed off to get into proper uniform.

He proudly donned his maroon beret while I focused in on his weathered face, hoping to capture the essence of a man who has seen more combat than me or anyone I knew. I told him that I also served in an American commando unit, both in Khost at FOB Salerno as well as in Jalalabad, Nangarhar.

“When Taliban attack Salerno,” he replied, “I was one of commandos who responded. We killed many Taliban.” He was referring to the attack on FOB Salerno in 2010, which occurred just a few month after I finished my final deployment. Small world, I thought.

With the Taliban still a formidable threat in Afghanistan, I knew that it wouldn’t be long before Akr returned to the fight. He didn’t seem like the type of guy to call it quits before the job was done, so I told him to be safe but to kill a lot of Taliban. His reply was very matter of fact: “I have already killed many Taliban.”​