I met my husband in Calculus class 13 years ago when we were both freshmen at the Air Force Academy.... 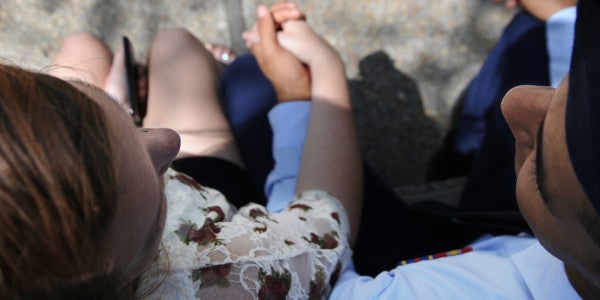 I met my husband in Calculus class 13 years ago when we were both freshmen at the Air Force Academy. I was 18 and he was 19, and I remember him being as stoic as anything. He is the only person I dated in my life. We dated throughout our time at the Academy, were engaged our junior year, legally married the day after graduation so we could be stationed with each other, and then had our ceremony a few months later in the Outer Banks of North Carolina. It was the party to be remembered forever.

We’ve been married for about nine years now. We were both active duty for about five years, until I left the service to work on human resources for veteran programs. My husband stayed in on a 10-year commitment post-pilot training of two years, and thus I became a military spouse. My husband still is serving today as a C-17 pilot, and is gone up to 280 days a year. Over the course of these 13 years, I’ve found ways that have helped us survive in a dual-military relationship and a long distance relationship when I got out.

I do not care if you are the “silent type” or a man or woman of few words. If you are going to be separated from your spouse, then you need to communicate more than a normal couple. This means making the extra effort to talk about your day even if nothing happens. I used to joke that I could tell my husband about the number of strokes I did with my toothbrush, so he could find something to talk about. We instituted the “three things” rule, meaning we had to tell each other at least three things that happened in our day. This rule applied via email, phone, or in person.

Take care of yourself.

When my husband met me I was rocking a mullet with most of my blonde hair cut off. My uniform did little for my shape and I loved to wear a sultry-colored eyeshadow called “Dirt.” My husband likes to joke that it really drew him in. That being said, we both prided ourselves on taking care of our bodies, through fitness, diet, and mental stimulation. We met in a profession where it is critical to pay attention to those things and respect ourselves. We are firm believers that if you respect mind and body, then others will share that respect. Not caring about yourself sends a message that you don’t respect your significant other.

Be the third wheel.

It is okay to be the extra person in social settings. If your friends understand your situation, they won’t mind if you come without your spouse. You can’t plan if a mission will take longer than expected, and being comfortable enough to go out with friends in couple status without your other half is part of the game. Don’t expect anything and be happy when things do work out. This is a skewed way of looking at life sometimes, but when you live in a world of unknown schedules, you can’t let yourself get disappointed if plans get cancelled. Living in a world of “maybes” is frustrating, but keeping up a social life is better than being alone.

Be happy for each other.

Part of going temporary duty is not always having a work-related “rough” time; there are some perks to the job. My husband’s plane breaks down in Hawaii frequently enough that I just ask if he had fun and hope he got to see some of his friends while he was there. The military encourages a work hard, play hard mentality, and being supportive of that is critical. If I nagged my husband every time he was enjoying himself in Germany or got a chance to visit a zoo in Africa, I would be consistently putting myself in a position of misery.

It also goes the other way. I cannot stop my life when I am home or on work trips. I train for triathlons, and explore, and go out with friends. Is it difficult being alone in the home? Of course, but my choice is to embrace it. The alternative is to end up in a constant holding pattern. If we have unknowns on return times, we plan our lives and embrace the times our paths cross. Is that entirely normal? No. But it is a military way of life, particularly when only one is still in the service. Take advantage of your planned vacation days when you can.

Respect each other’s schedules and lifestyles.

My husband and I both respect the fact that we have busy schedules and are not able to put our day jobs on hold to attend social gatherings or events for the other person. Tacos Tuesday on base for instance is a time to serve tacos to the service members at lunch hour. Being a working spouse an hour away makes attending these difficult, but just because I cannot attend to serve lunch or raise squadron funds, doesn't mean I don't believe in the cause.

It is okay to skip out on the military functions for your significant other when schedules conflict, just as he or she doesn’t have to attend corporate functions. I am not the world’s most routine military spouse when it comes to attending events, but my husband knows this doesn’t mean I support him any less. We are an equal opportunity household that believes in respect, not subordination. This means are very supportive of each other, and don’t feel we have to attend each other’s work functions to show we care or are vested. We attend when we can and show our support in other ways. We don’t base the merit of our relationship on how often we halt our professional lives for the others’ career. We are excited for each other’s professional pursuits.

The military world is full of grey areas, maybes, and setting realistic expectations. Is it difficult to be in a relationship with a military member, or be in an dual-military relationship? Absolutely. Is it ideal? Not at all. But attitude, communication, flexibility, a sense of humor, and knowing who each other are is critical to keeping that relationship happy and healthy.