Blue Star Families’ annual survey reports that 58% of military spouses are unemployed. Lizanne Carlson is not among them. At... 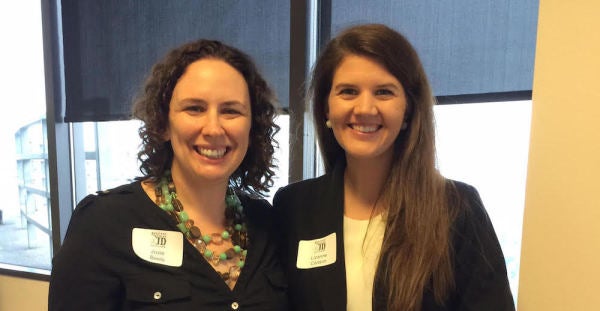 Blue Star Families’ annual survey reports that 58% of military spouses are unemployed. Lizanne Carlson is not among them. At 27, she has much more under her belt than just being the wife of an Air Force officer.

The Rock Hill, South Carolina, native always knew she wanted to work with people. Though she considered teaching at one point, she ultimately decided to go to law school and work on behalf of others through the judiciary system.

As an attorney, Carlson works with the underprivileged in her community to get them the legal counsel they need.

“I had considered teaching at one point because I enjoyed that, working with students — mainly older students — reaching goals and objectives, things like that really energize me,” she told Task & Purpose in an interview.

Despite the fact that she want went to Clemson University for her undergraduate degree and received a bachelors of arts in special education, Carlson decided to go right to law school after graduation.

“I liked the small feel of it and the welcoming environment,” she said. “Because I was an education major, I felt pretty much like a fish out of water because a lot of people who go to law school are history majors or .”

But Carlson flourished at Mercer thanks to the nature of its concentrated classes and more personalized attention.

Although it was always her desire to work in advocacy, when she finished law school she first tried her hand instead at business law. Preferring human interest issues, however, she quickly made the switch.

“I wanted to help people who couldn’t help themselves, basically,” Carlson said.

Established in the mid-1960s, North Mississippi Rural Legal Services saw a need to help those living below the poverty line to obtain legal services. This is what attracted Carlson to work with them, and the people she helps drive her passion.

“My first client … she was a single mom. She was in an abusive relationship, and she felt like she didn’t have anyone on her team.”

After meeting with the mother several times and discussing her situation, Carlson and her team were able to get the woman protective orders and child support. Soon after, she was able to secure both a job and housing.

“It was really cool to be able to help her get to a better place,” Carlson said.

Though not all cases end as well, Carlson said she’s learning to try not to take her work home with her when things get tough. She’s been with North Mississippi Rural Legal Services for nearly a year and said it’s gotten easier with time.

Now one of the greater challenges she faces outside of her job is frequent relocation. In fact, she and her husband will be moving to Oklahoma in January.

Carlson and her husband, Andrew, have been married for nearly three years, and when she was fresh out of law school, she said being a military spouse came up in a number of job interviews.

Like many spouses of service members are often required to do, Carlson will have to uproot and try to find a job in their new state.

She remains optimistic, however, crediting groups like the Military Spouse J.D. Network with helping her continue pursuing her career regardless of where her husband is stationed.

As a lawyer, Carlson must be barred in the state where she wants to practice, but the Military Spouse J.D. Network helps to translate her certifications from state to state. Utilizing all the career services available to military spouses is an advantage she hopes more people will have in the future.

To those looking for work either as a military spouse or in the field of advocacy, Carlson said, “Don’t give up, and be persistent.” Both areas can be hard to navigate.

For Carlson, it took moving and meeting new people before she was able to find her job with North Mississippi Rural Legal Services. She even joked about having to beat down doors to get people to consider her.

As for the future and her upcoming move, she said, “I definitely see myself doing something with the law,” adding that her main interests are likely going to remain in human interest law and nonprofit work.