Alejandra Juarez, the wife of an Iraq War combat veteran, was deported on Friday after a desperate effort to remain... 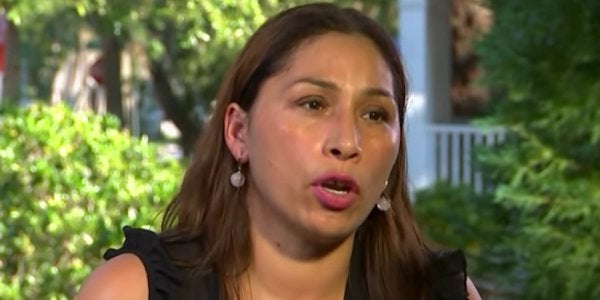 Alejandra Juarez, the wife of an Iraq War combat veteran, was deported on Friday after a desperate effort to remain in the U.S.

After being notified of her deportation date by Immigration and Customs Enforcement (ICE) and with few options left, Alejandra recently wrote a letter to President Donald Trump pleading with him to let her stay in the US. She hoped her husband's war record might persuade the president to intervene.

But Alejandra's calls for leniency have seemingly gone unanswered and she boarded a plane at Orlando International Airport on Friday morning bound for Mexico, where she's originally from.

Prior to going through the security checkpoint at the airport on Friday, she offered a short message to Trump: “I hope this makes you happy,” she said. “May God forgive you.”

Alejandra Juarez,38,left,has an emotional goodbye Friday to her children, Pamela,16, Estela,8, and Katie Aragon,right, of @fwd_us at @MCO as U.S.Rep Darren Soto looks on. Juarez has run out of options to keep her family together and will be deported to #Mexico. pic.twitter.com/2Lmlyraqns

Alejandra's husband, Sgt. Cuauhtemoc “Temo” Juarez, is a former Marine turned National Guardsman who fought in Iraq. She says the decision to deport her is disrespectful to her husband's service and status as a veteran.

“They're punishing him for something that I did a long time ago. His only mistake was marrying me,” Alejandra told the Orlando Sentinel.

Alejandra and her husband have two children: Pamela, 16, and Estela, 8.

The Juarez's eldest daughter will remain in the U.S. with her father, but Estela will soon join her mother in Mexico given Temo Juarez frequently travels for work.

Alejandra entered the US illegally in 1998 and never obtained legal status, even after she married her husband in 2000, who came to the US from Mexico as a child and become a naturalized citizen several days before he was deployed to Iraq.

The Trump administration's immigration policies are hard on military families, too

In 2013, Alejandra was pulled over in a routine traffic stop and a search of her record revealed she was in the country illegally.

For many years, unauthorized immigrants who were spouses of members of the U.S. military were not prioritized for deportation and in some cases had options to legally stay in the country. Hence, when Alejandra's illegal status was revealed in 2013, immigration authorities simply told her to check in twice a year.

But the relative leniency military spouses and dependents experienced in the past has rapidly dissipated under the Trump administration's “zero tolerance” policy towards unauthorized immigrants in the US.

Under Trump, the government has increasingly rejected requests from veterans and their dependents for protection from deportation, data from U.S. Citizenship and Immigration Services shows, and it seems Alejandra was no exception.

At present, there are roughly 11,800 current members of the US military who have spouses or family members facing deportation, according to analysis from American Families United, a non-profit immigration advocacy group.

As Alejandra departed the U.S. on Friday, she and her family were joined by Rep. Darren Soto, a Democrat who represents the Florida district where the Juarez's live.

Soto in recent months sponsored legislation aimed at protecting military spouses from deportation, which was inspired in part by Alejandra's situation.

On Friday, Soto said, “It was so devastating that we couldn't even get the Trump Administration to work on this case with a military spouse who has done everything to help her husband serve this country.”

Alejandra would not say where she's going in Mexico, which seemed to be linked to fears over her safety. She's originally from Mexico City, but fled because of a death threat and a dysfunctional family.