What It’s Really Like Growing Up In A Military Town

I was 6 years old when my dad got orders to transfer to Naval Station Norfolk and deploy with the... 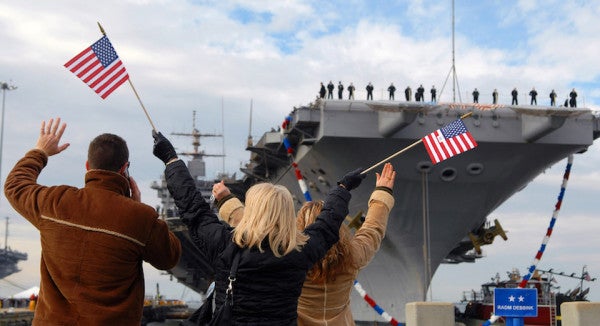 I was 6 years old when my dad got orders to transfer to Naval Station Norfolk and deploy with the USS Shreveport. So in 1997, we packed up our base house in Plymouth, Massachusetts, and moved to a small, three-bedroom house in Virginia Beach, Virginia.

At the time, my parents made the conscientious decision not to live on base, because we’d already lived in the area from 1991 to 1994 and preferred life off post.

The prospect of moving was daunting at first, as we had family living in Massachusetts, and very few acquaintances in Norfolk. But like all military families do, you put your best face forward and move. Between 1997 and 2001, we rented three different houses before settling on one in a quiet Norfolk neighborhood to buy — one that my parents still live in today.

Unbeknownst to us, the permanent change of station turned out to be one of the best things that could have ever happened. Although moving to a military town is not a decision families make for themselves, learning to love it is their choice.

Known for being home to the world’s largest Navy base, Norfolk boasts something much more special: its people.

Related: Six creative ways to help your kids with deployment »

One of the most striking things about Norfolk and the Greater Hampton Roads Area is that it’s so deeply influenced by the military. There are very few natives, and most of them, somewhere down the line, had parents, grandparents, or great-grandparents who were brought there by the military. As a kid, almost all my friends had at least one parent serving, if not both.

The thing about living in a military town like Norfolk is that the residents become a part of your extended family. Most military families never have the luxury of living near blood relatives, so you learn to lean on your neighbors, squadron, platoon, or church. When good things happen, they rejoice with you. When bad things happen, they are the first to lend a hand in any way they can.

I remember, there was a girl in my class whose dad was serving on the USS Cole when it was attacked in 2000, and everyone came together to do whatever they could to ease the burden for her mom. We attended a small Catholic school, and the church held a prayer service for his safe return and the safety of the whole crew. He arrived home, and the entire community felt relief with the family.

When the two planes crashed into the World Trade Center on Sept. 11, 2001, it shook the entirety of Hampton Roads.

My dad, and all my friends’ moms and dads who served, were sent out to sea immediately after the attacks to prevent fleet damage. The families left behind, rather than being sad, afraid, and hiding out at home, came together. Parents who were able to stay home helped watch the children of service members who were deployed. We held candlelight vigils and patriotic picnics, and there was just a feeling that while the attacks were painful, they would not keep us down.

It’s no surprise to me that a number of people I grew up with chose to follow in their parents’ footsteps. After graduating high school, so many of them attended military academies, opted for ROTC, or enlisted. Others I know have since married soldiers, Marines, and sailors. Growing up in a military town laid the foundation for a number of my friends’ adult lives — and I guess I should say mine too.

The military is a lifestyle, and once you’ve experienced it, is almost impossible to leave behind. The friendships you make there are lifelong and survive distance in a way that most relationships can’t. That’s just the culture of the military overall.

Even though Task & Purpose readers voted Norfolk as the worst place in the Navy to be stationed, I find myself missing it often. Regardless of the bad traffic on Military Highway or the extreme flooding when it rains, I’m proud to call Norfolk home, and I couldn’t imagine what life would be like had I not grown up in a military town.