5 Reasons Why Military Spouses Are Badass

By marrying into the military, these spouses pledge to support their service member for life, through all the deployments, relocations,... 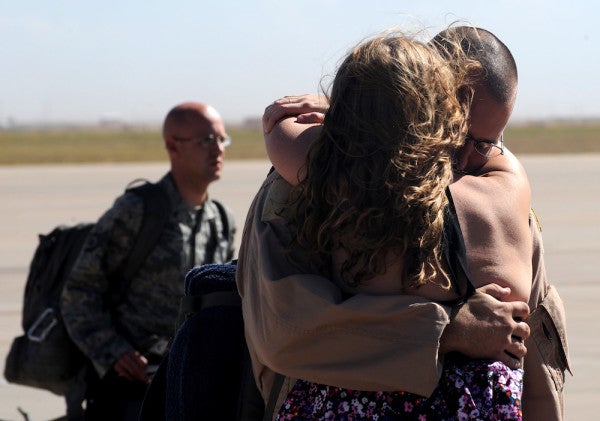 By marrying into the military, these spouses pledge to support their service member for life, through all the deployments, relocations, and transitions. They face everyday hardships head on and persevere in service of their spouses, children, and the country. With inexplicable courage, military spouses rise above the adversity of frequent moves, single parenthood, and self-sacrifice in order to keep hold everything together while their husbands and wives serve.

1. They have patience — extreme patience.

Six-month, 12-month, 18-month deployments? The military spouse has done it all. More than 2 million Americans have been deployed overseas since 2001. Their spouses make the effort to schedule late-night Skype sessions, send care packages, and write letters to stay close to their spouses abroad. They know it isn’t easy to be in long-distance relationships, but they support their spouses wherever they serve. Military spouses don’t take the time they have with their husbands and wives for granted — every minute together counts.

Not only is it hard to take care of everyone while your spouse is away, but there is always fear and anxiety about the dangers of deployment. Military spouses support someone who puts him or herself into harm’s way, and they do it with courage. They wear a brave face for their kids and for their spouses. While their spouses deploy abroad, they really hold down the fort at home.

3. Frequent relocation is terrible, but they do it.

Military families relocate more often than civilian families — on average, every two to three years. Military spouses can pick up and move at the drop of a hat. Across town, across the country, across the globe — they become pros at packing up and moving as soon as orders come. They can adapt to any situation with grace, whether it’s in making new friends, navigating different school systems, or turning new houses into homes for their families.

Cooking all the meals, cleaning the house, running the kids to soccer practice, making sure everyone’s homework is done, and paying the bills — these are just a few of the things that a military spouse does on a daily basis. They keep things running smoothly when their husbands and wives are gone. Some even rise to the challenge of giving birth while their spouse is deployed. During deployment they take on the role of two parents, always making sure their kids have as a normal a life as possible.

Military spouses recognize the risks faced by their service members in their jobs, and the idea of loss. They understand the moves, and living far away from friends and family. What’s more, according to Blue Star Families annual survey, 58% of military spouses are unemployed, often because they can’t find adequate childcare, or their career fields don’t exist where their spouses are stationed. No matter what, military spouses make the best of the situation.

These spouses adapt quickly and gracefully handle the curve balls associated with military life, and they are fiercely loyal in support of their spouses.