There’s A Big Problem With That Viral Military Spouse Photo 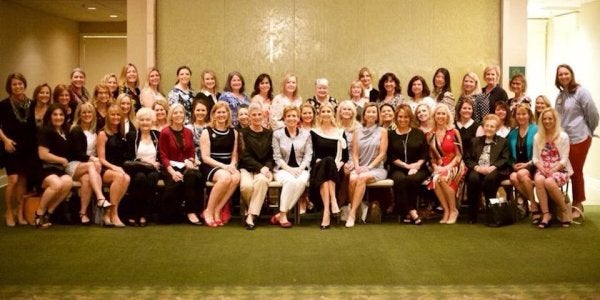 As a one-time ‘Ebola czar’ under President Barack Obama, Democratic political operative Ron Klain spent months fighting to stop viral outbreaks. On Friday, though, he found himself in the middle of one.

May 11 marked Military Spouse Appreciation Day, which Klain decided to celebrate by bitching about the alleged gender and racial composition of the military spouses who joined Ivanka Trump and the White House in a now-viral tweet.

The WH hosted military spouses today. Our armed forces are 40% non-white. The odds that — BY CHANCE — a group of 52 military spouses would contain no people of color are lower than 100 trillion to 1. So, umm…. pic.twitter.com/zi6XzmzYBd

The assertion by Klain is clear: the White House is whitewashing the military!

But there’s a big problem: this photo doesn’t show what Klain says it does.

The photo was actually taken at the annual Joint Armed Forces of Washington Luncheon (JAFOWL) on April 24, not the White House. In fact, it only shows members of the Air Force Officers' Spouses' Club. I mean, you don’t have to be a clotheshorse to notice the dress Ivanka is wearing in the Klain photo matches the one she wore on April 24 and not the one she wore on May 11:

Here’s the thing: Klain’s not totally wrong. A 2016 Pentagonreport on DoD demographics found that minorities make up a third of enlisted and nearly a quarter (23%) of officers, an increase in recent years. And when it comes to elevating the voices and stories of underrepresented veterans, this photo is a fine illustration of exactly what not to do.

But it’s not even the right f*cking photo, and the JAFOWL context matters in explaining why there’s a lack of representation here. First, a little background on the group:

In June of 1977, the Navy Officers’ Wives’ Club contacted Art Buchwald’s office to ask if he would speak at one of its luncheons. Answering the telephone himself, Mr. Buchwald declined, saying that he received too many requests from military wives’ clubs. When asked, “What if all five of the clubs sponsored a joint luncheon?” he said he would accept the invitation. The presidents of the other military officers’ wives’ clubs in the area were contacted and all agreed it was a great idea! Thus, the Joint Armed Forces Officers’ Wives’ Luncheon became an annual affair.

Given that the wives in this photo chose to marry Air Force officers — 20 percent of whom identify as a racial minority, below the rate for officers across the entire U.S. armed forces — it would make sense that there might be a distinct under-representation of black and Asian military spouses, and it’s certainly a problem. But the issue isn’t that the White House only invited white women — it’s that organizations like JAFOWL, though they serve the military and veterans communities admirably, are stuck in the f*cking 1950s.

Many others believe that groups like JAFOWL reinforce a hierarchy where officers’ spouses have a louder and more prominent voice than enlisted spouses, and Military Spouse Appreciation Day is a fantastic chance to get the Pentagon’s attention on like this. Sadly, Ron Klain ruined it with an inaccurate cheap shot at the White House — and in an age where all quarters of the government shout down their critics as “fake news,” this sort of inaccuracy can muddle the waters on a subject indefinitely.